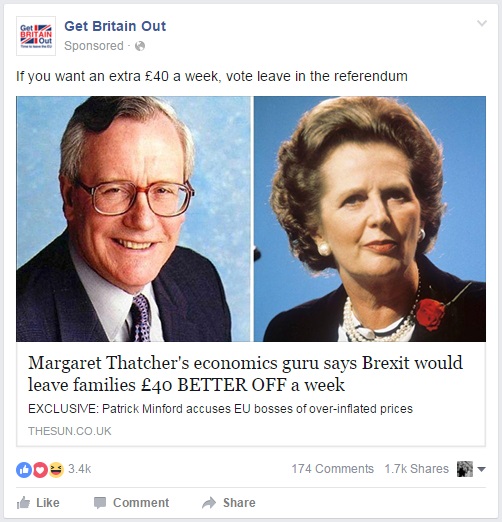 With allies like Patrick Minford and Get Britain Out, who needs the Remain campaign?

Professor Patrick Minford accused EU chiefs of imposing over-inflated prices on everything from food to cars.

And he calculated tearing down trade barriers after we leave will boost growth and bring consumer prices down by 8p in the Pound.

Prof Minford said: “Prices are 20 per cent higher inside the EU compared with world prices.

“The system is designed to keep prices up and consumers are paying for this.

“But if we pulled out, your average Sun on Sunday reader would be 40 quid a week better off.

Well, that’s sorted then. Punch a few numbers into the Minford Model and it turns out that £40 will magically materialise in our wallets the moment we achieve Brexit. Great! That will just about cover the cost of a bottle of Veuve Cliquot to toast the restoration of our democracy.

How long until Vote Leave use this “analysis” to knock up their own version of Britain Stronger in Europe’s risible calculator, which shows how terribly destitute we will all be if we are so rash as to spurn the European Union?

How long until either of the main campaigns treats the British electorate like intelligent adults?*