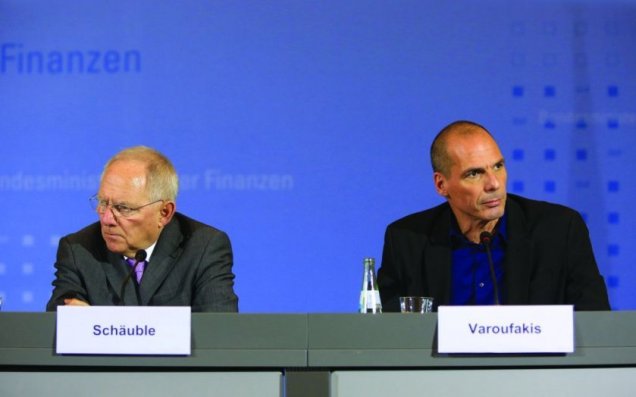 Think that the EU is a hopelessly outdated, cumbersome, anti-democratic tyranny of the technocrats and unaccountable elites? So does Yanis Varoufakis. But he would very much like for you to vote Remain.

If you were searching for a passionate, eloquent case against the EU and the increasingly discredited idea of European political union from a non-Briton, you could do little better than the first 80% of Yanis Varoufakis’ latest Op-Ed in the Guardian.

In his article, Varoufakis uses anecdotes from his brief and tumultuous period as Greek finance minister to give the reader an illuminating and deeply unpleasant close-up view of exactly what it is like for a national government minister to face off against the EU’s leaders and technocrats in defence of their sovereign national interest (spoiler alert: advocating for national interest, like sovereignty, is verboten).

If you stop reading the Op-Ed before the final six paragraphs, you would come away thinking that this is a man who has stared into the cold, dead eyes of supranational European governance, seen its soul and come away understanding just how misguided and dangerous is the anachronistic, mid-century experiment known as the EU.

But then Varoufakis executes one of the sharpest journalistic handbrake turns you will ever see, wilfully ignoring his own bitter experience at the hands of supranational governance for the “common good”, and somehow arriving at the conclusion that everything will be better if we simply double down on our commitment to European political union.

His response upon being burned by the flame of unaccountable, supranationalist technocracy is apparently not to recoil his hand, but rather to go marching briskly on into the inferno.

Thus Varoufakis goes from this, when describing the nature of his negotiations with the Eurogroup (and German finance minister Wolfgang Schäuble in particular) at the height of the Greek Euro crisis in 2015:

An alliance of states, which is what the EU is, can of course come to mutually beneficial arrangements, such as a defensive military alliance against a common aggressor, coordination between police forces, open borders, an agreement to common industry standards, or the creation of a free-trade zone. But it can never legitimately strike down or overrule the sovereignty of one of its member states on the basis of the limited power it has been granted by the sovereign states that have agreed to participate in the alliance. There is no collective European sovereignty from which Brussels could draw the legitimate political authority to do so.

One may retort that the European Union’s democratic credentials are beyond reproach. The European Council comprises heads of governments, while Ecofin and the Eurogroup are the councils of finance ministers (of the whole EU and of the eurozone respectively). All these representatives are, of course, democratically elected. Moreover, there is the European parliament, elected by the citizens of the member states, which has the power to send proposed legislation back to the Brussels bureaucracy. But these arguments demonstrate how badly European appreciation of the founding principles of liberal democracy has been degraded. The critical error of such a defence is once more to confuse political authority with power.

A parliament is sovereign, even if its country is not particularly powerful, when it can dismiss the executive for having failed to fulfil the tasks assigned to it within the constraints of whatever power the executive and the parliament possess. Nothing like this exists in the EU today.

Moreover, the Eurogroup, where most of Europe’s important economic decisions are taken, is a body that does not even exist in European law, that keeps no minutes of its procedures and insists its deliberations are confidential – that is, not to be shared with the citizens of Europe. It operates on the basis – in the words of Thucydides – that “strong do as they please while the weak suffer what they must”. It is a set-up designed to preclude any sovereignty derived from the people of Europe.

While opposing Schäuble’s logic on Greece in the Eurogroup and elsewhere, at the back of my mind there were two thoughts. First, as the finance minister of a bankrupt state, whose citizens demanded an end to a great depression that had been caused by a denial of our bankruptcy – the imposition of new unpayable loans, so payments could be made on old unpayable loans – I had a political and moral duty to say no to more “extend-and-pretend” loan agreements. My second thought was the lesson of Sophocles’s Antigone, who taught us that good women and men have a duty to contradict rules lacking political and moral legitimacy.

Political authority is the cement that keeps legislation together, and the sovereignty of the body politic that engenders the legislation is its foundation. Saying no to Schäuble and the troika was an essential defence of our right to sovereignty. Not just as Greeks but as Europeans.

To this, in his pivot towards advocating a Remain vote:

Our European Union is disintegrating. Should we accelerate the disintegration of a failed confederacy? If one insists that even small countries can retain their sovereignty, as I have done, does this mean Brexit is the obvious course? My answer is an emphatic “No!”

Here is why: if Britain and Greece were not already in the EU, they should most certainly stay out. But, once inside, it is crucial to consider the consequences of a decision to leave. Whether we like it or not, the European Union is our environment – and it has become a terribly unstable environment, which will disintegrate even if a small, depressed country like Greece leaves, let alone a major economy like Britain. Should the Greeks or the Brits care about the disintegration of an infuriating EU? Yes, of course we should care. And we should care very much because the disintegration of this frustrating alliance will create a vortex that will consume us all – a postmodern replay of the 1930s.

It is a major error to assume, whether you are a remain or a leave supporter, that the EU is something constant “out there” that you may or may not want to be part of. The EU’s very existence depends on Britain staying in. Greece and Britain are facing the same three options. The first two are represented aptly by the two warring factions within the Tory party: deference to Brussels and exit. They are equally calamitous options. Both lead to the same dystopian future: a Europe fit only for those who flourish in times of a great Depression – the xenophobes, the ultra-nationalists, the enemies of democratic sovereignty. The third option is the only one worth going for: staying in the EU to form a cross-border alliance of democrats, which Europeans failed to manage in the 1930s, but which our generation must now attempt to prevent history repeating itself.

This is precisely what some of us are working towards in creating DiEM25 – the Democracy in Europe Movement, with a view to conjuring up a democratic surge across Europe, a common European identity, an authentic European sovereignty, an internationalist bulwark against both submission to Brussels and hyper-nationalist reaction.

Is this not utopian? Of course it is! But not more so than the notion that the current EU can survive its anti-democratic hubris, and the gross incompetence fuelled by its unaccountability. Or the idea that British or Greek democracy can be revived in the bosom of a nation-state whose sovereignty will never be restored within a single market controlled by Brussels.

Just like in the early 1930s, Britain and Greece cannot escape Europe by building a mental or legislative wall behind which to hide. Either we band together to democratise – or we suffer the consequences of a pan-European nightmare that no border can keep out.

In other words, the European Union as it is presently constituted and governed is a colossal, anti-democratic behemoth, but trying to leave this decaying mid-century relic to embrace the kind of inter-governmental and multilateral cooperation which befits a modern, confident Britain in a globalised world would “create a vortex that will consume us all”. Britain is stuck with the decision it made in 1975.

This is the Sajid Javid school of thought – the heart feels eurosceptic and yearns for Brexit, but the head worries that the world is too dangerous and uncertain right now for us to risk a small outbreak of democratic sovereignty by voting Leave. Incidentally, it is also the same mental cowardice that would have seen the thirteen American colonies never declare their independence from an overbearing, undemocratic British Crown with which they increasingly felt little affinity.

Much like the battered spouse convinces themselves that they are the ones at fault, or that their abusive partner can change, Yanis Varoufakis seems to have convinced himself that with enough “grassroots support” a pan-European democratic movement (his own DiEM25) can spring up and accomplish the following lofty goals at the drop of a hat:

But it is pure wishful thinking. The EU’s architects (those who bought into the original vision of a process leading to a single European state) and current beneficiaries (political elites who enjoy the lack of full accountability to their own electorates) will not take such a brazen power grab lying down. Varoufakis, if he recalls, was finance minister of Greece until the powers that be froze him out, forcing his resignation.

And were they to succeed, DiEM25 would only be yet another entirely elitist group seeking to impose their own top-down vision of supranational governance on the peoples of Europe. Two of its founder members (Noam Chomsky and JK Galbraith) are Americans who have no damn right to decide how we choose to govern ourselves in the first place.

(Look beyond the flashy website and the picture of a smiling Caroline Lucas and read the manifesto, and you’ll see that the talk of democracy is just a window dressing for the same integrationist dogma, only bolted on to a bunch of miserablist, left-wing nonsense)

Apparently Varoufakis’ idea of an alternative to the current hegemony of the Brussels elite is to replace them with a new academic elite instead – to cram the European Union’s institutions with tweed-jacketed professors in place of sharp-suited lobbyists and bureaucrats.

One can understand why Yanis Varoufakis might want to agitate for a mini-revolution within the European Union to displace his many recently-acquired enemies and install more people like him (cerebral, academic types) in their place.

One can even admire his chutzpah for trying to engineer such a coup in broad daylight, and his shamelessness at exploiting the very real suffering of his Greek compatriots in an attempt to bring about another elitist vision of European political union (which will fail ordinary citizens just as the current model fails Europe’s citizens).

But what Varoufakis utterly fails to do – having devoted the majority of his Guardian Op-Ed to correctly explaining why the EU is a democratic black hole – is advance the slightest argument as to why Britain should aid and abet him in his grubby scheming by voting to remain in the European Union this June. 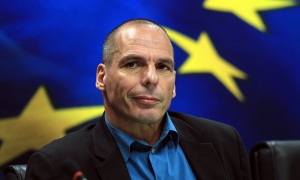