When it comes to picking a side in the coming EU referendum, it is possible to categorise the many betrayals and disappointments dished up so far by the Conservative Party.

Some, like William Hague’s, are infuriating because of their misplaced priorities and fawning deference to power. Others, like that of Harlow MP Robert Halfon, are depressing because they fly in the face of long-avowed, ostentatious euroscepticism. But none are so perplexing as the screeching U-turn executed by Business Secretary Sajid Javid.

A barely coherent Javid took to the pages of the Daily Mail today with the most bizarre case for staying in Europe yet offered by a turncoat Tory – arguing that Britain would be much better off had we never joined the EU in the first place, but that now we are in the clutches of Brussels we have no choice but to allow ourselves to be slowly consumed and digested, like an unlucky insect caught in a Venus fly trap.

Javid begins by painting a rosy picture of the Britain we might now inhabit had we never joined the European Community back in 1973:

It’s clear now that the United Kingdom should never have joined the European Union. In many ways, it’s a failing project, an overblown bureaucracy in need of wide-ranging and urgent reform.

Had we never taken the fateful decision to sign up, the UK would still, of course, be a successful country with a strong economy.

We would be an independent trading nation like the US, Japan, or Canada.

Over the years, we would have developed trade agreements with the EU and with others, all without surrendering control over immigration or our economic independence.

You might think that this would lead quite naturally to a stirring call for Britain to reclaim all of these squandered benefits of independence. But Sajid Javid proceeds to wrong-foot us by continuing:

If this year’s referendum were a vote on whether to join in the first place, I wouldn’t hesitate to stand up and say Britain would be better off staying out.

That’s why, with a heavy heart and no enthusiasm, I shall be voting for the UK to remain a member of the European Union.

And so unfolds the most depressing, fatalistic argument in favour of staying in the European Union that you will likely hear this entire campaign. Apparently, had we made the right choice forty years ago we could now be living in the land of milk and honey, with endless prosperity and contentment for all. But we missed the boat, and because of that one supposedly irredeemable mistake, we are condemned to dwell forever in the arid desert of unwanted European political union.

Why? Because Sajid Javid is afraid of the potential short-term cost. Or rather, because he values democracy, sovereignty and national self-determination so little that the mere possibility of short term economic disadvantage is enough to make him turn a blind eye to the very real failings and even more anti-democratic future direction of the EU:

As I’ve said before, a vote to leave the EU is not something I’m afraid of. I’d embrace the opportunities such a move would create and I have no doubt that, after leaving, Britain would be able to secure trade agreements not just with the EU, but with many others too.

The great unanswerable question is how long that would all take – and at what short-term cost?

Take this logic and flip it around. Suppose it were possible that by becoming a fascist dictatorship for decade or so it would be possible for Britain to increase GDP by three per cent over and above current annual forecasts – by forcing the unemployed to build houses and weapons in exchange for benefits, riding roughshod over pesky planning regulations, and generally doing all of the autocratic things which democracy rightly prevents us from doing.

According to Sajid Javid’s logic, we should toss democracy aside and eagerly embrace strong-fisted dictatorship, just to reap the potential economic gain. Nothing else would matter – or at least, everything else would be secondary to the GDP question.

Even the most committed members of the ‘leave’ camp accept that there will inevitably be a short-term cost to leaving.

The question is whether it is balanced out by the long-term gains. It’s a very reasonable question – and I came incredibly close to answering ‘Yes, yes it is.’

Javid even admits here that “the negotiations would end well for Britain”. Ignoring the fact that a plausible plan for Brexit exists, which de-risks the entire process and eliminates much of the uncertainty, Javid is willing to throw away an eternity of democratic self-governance in exchange for what he himself believes to be just a couple of years of potentially increased economic security. This is an almost pathological level of risk-aversion.

My heart says we are better off out. My head says it’s too risky right now. For the past six years, I’ve been doing everything I can to repair the damage Labour did to our national economy.

I’m no europhile, but nor am I prepared to risk undoing all that work and casting aside all the sacrifices we asked of this country while the post-Brexit talks drag on and investor confidence wavers. Staying in the EU for now doesn’t have to mean accepting the status quo.

[..] For me, this referendum does not have to be a once-in-a-generation event. The fight for reform is not over and if Brussels fails to recognise that, I can see a time when walking away may be the right thing to do – but in a more benign global economic environment and under a UK Government that makes a credible case for leaving.

And so ends the most bizarre case for remaining in the EU you are ever likely to hear. Apparently we are now to make existential decisions about the future of our governance and democracy solely according to where we happen to be in the economic cycle. Want to restore sovereignty while the economy is booming? Go for it! But want to make a bid for freedom during a downturn – or even just a potential downturn? Sorry, GDP projections say no.

This atrocious argument for Remain encapsulates everything that this referendum should not be about. We are talking about the future governance and sovereignty of our country. If there was ever a time for us to think as fully engaged citizens with an eye on the future – and the ability of our children to exercise control over their destinies – then this is it. Now is certainly not the time to think and act like fearful, petty consumers, concerned only with the fatness of our wallets today while sparing no thought for the future of our democracy.

Yet this is exactly what Sajid Javid asks us to do. I agree with you, the EU is totally undemocratic and resistant to reform, he essentially tells us. But the pound might briefly dip against the euro if we leave, so screw securing democracy for tomorrow, vote for the status quo to guarantee an uninterrupted supply of cheap flat-screen TVs today!

What a pathetic, insular, insulting argument to make. How disgusting that the supposed rising star of the Conservative Party would thus attempt to appeal to the scared and avaricious consumer within us, rather than the enlightened and noble citizen.

Make a passionate case for a federal European state and I will respect you, even though I profoundly disagree.

Make a wobbly-lipped, pant-wetting case for clinging to the EU’s skirts out of sheer terror at the Big Bad World and I will roll my eyes at you and move on.

But if you dare treat me like some kind of mindless automaton who thinks only with tomorrow’s bank balance in mind – if you tell me that the EU sucks, but that I should vote to remain because to leave would cause a brief macroeconomic blip – then I will tell you to go direct to hell. And I will hold you in seething contempt for a very, very long time.

When the Continental Congress met in Philadelphia to discuss the portentous issue of separation from Britain in 1776, the committee chosen to draft the famous declaration was – astonishingly – not myopically obsessed with the impact of independence on GDP.

Thomas Jefferson understood, when he wrote “We hold these truths to be self-evident, that all men are created equal, that they are endowed by their Creator with certain unalienable Rights, that among these are Life, Liberty and the pursuit of Happiness”, that something far greater than 1777’s economic forecasts was at stake. That democracy itself was at stake.

Sadly, this democratic ideal – or indeed the concept of anything being more important than minimising the risk of disruption tomorrow, even when the status quo is crying out for disruption – is totally anathema to many of those who argue against Brexit today, including many supposed eurosceptics who should know better.

The Conservative Party has served up its share of gut-wrenching disappointments and betrayals in the build-up to this EU referendum. But none of them are proving quite so difficult to stomach as this steaming pile of nonsense from Sajid Javid. 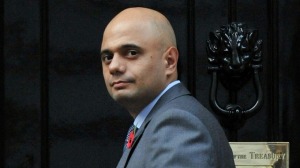