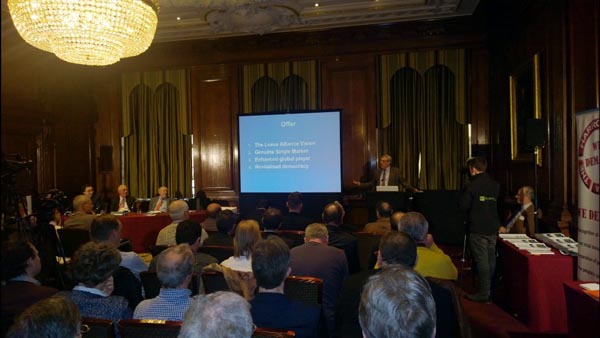 This EU referendum is about the people, not the Westminster elite. Fortunately, there now exists a truly independent Brexit group – the only genuinely grassroots campaign fighting the referendum, and the only one with a credible plan for safely leaving the European Union

Last week – on Budget day, in fact – the Leave Alliance of individuals and groups campaigning for Britain to leave the European Union held its launch in Westminster.

Don’t worry, you’re not the only one who didn’t realise that anything had happened. The media is still having trouble wrapping their collective mind around the fact that in a referendum, the voices of politicians are no more important than those of ordinary citizens. That’s why every time Boris Johnson opens his mouth to utter his latest half-baked Brexit plan it is considered front page news, but when a group of private citizens and organisations form an independent campaign group to fight a national referendum it is deemed so un-newsworthy that it receives barely a ripple of attention.

Even when that launch takes place in the heart of Westminster, literally down the street from certain venerable news organisations (hello, Spectator), the idea of the Westminster media dispatching a journalist or two to see what was happening in their own back yard is apparently unthinkable. Every last resource simply had to be committed to this year’s Pulitzer Prize-winning coverage of George Osborne’s 2016 Budget, Omnishambles Revisited.

To be fair, The Leave Alliance – of which this blog is an enthusiastic supporter – did register a mention in Christopher Booker’s Telegraph column:

[Boris] Johnson’s empty-headed amateurishness only typifies the fatal failure of any of his allies in the “Leave” campaign to agree on a plausible, properly worked-out exit plan. One after another they come up with their own equally half-baked suggestions, which only demonstrate how none of them have done their homework. This is giving Cameron’s “Project Fear” an open goal, by failing to show how we could practically leave the EU while continuing to enjoy full access to the single market.

The only group that has done so, the Leave Alliance – launched last week with support from the Bruges Group, the Campaign for an Independent Britain and others – is too small to bid for the lead role in the campaign (although I am told on good authority that its expert and exhaustive analysis of all the options has been found very useful by civil servants).

But for a full account of the Leave Alliance launch you have to turn to the blogosphere. Lost Leonardo, writing at the Independent Britain blog, provides this summary:

The Leave Alliance (TLA) is a network of new and established political groups, bloggers and tweeters who are committed to winning the EU referendum for the “leave” side. What makes TLA unique among the declared leave groups is its support for a credible Brexit plan.

Flexcit: The Market Solution is a six-phase plan for recovering Britain’s national independence in stages, as part of a continuous process, rather than as a one-time event. That change of perspective shifts the Brexit debate firmly in the direction of pragmatic and practical politics. The exact form that our post-Brexit deal takes is less important than our vision for what we will do with our national independence. Self-governance means taking responsibility unto ourselves and, if our politicians are any indication, a long process of discovery and rediscovery lies ahead.

So as to short cut the economics- and trade-centred debate that has been allowed (some might say encouraged) to obscure the more important political question—who governs Britain?—the Flexcit plan advocates remaining in the Single Market and then working to create a genuine free trade area in Europe whilst also rebuilding the national policy-making framework and enhancing our democracy by means of The Harrogate Agenda.

This gravity of this referendum on Britain’s EU membership compels us all to think as fully engaged citizens, not merely as frightened consumers or “low information voters” easily manipulated by the cynical propaganda emanating from the major Remain and Leave campaigns. And in this campaign, it is the Remain campaign which benefits from our ignorance and the Leave campaign which is strengthened by knowledge.

When people educate themselves about the European Union, its history and its workings, they almost inevitably become more eurosceptic as the scales fall from their eyes and they realise that the EU is in fact not just a friendly club of like-minded countries who gather together to braid each other’s hair and have a good chat.

As I recently confessed:

Growing up, I was the most ardent European Union supporter and federalist imaginable. I firmly believed that the age of the nation state was over, that patriotism was silly and gauche, and that our only hope of a prosperous future lay in dissolving ourselves into a greater European collective. Adopting the euro, creating an EU army – you name it, I believed in it.

[..] Only when my appreciation for democracy and self-determination (and small-c conservatism) caught up with my authoritarian Utopianism did I realise that the accumulated wisdom of the British people might exceed my own, and that there may be good reasons to be sceptical of the European Union. And only when I came to realise the extent to which the EU is a creation of a small group of European intellectuals and political elites who thought that they knew best – and that the only way to bring about their creation was through stealth and subterfuge, never declaring the ultimate federal destination of travel – did I come to see how profoundly wrong it is.

[..] There is indeed an army of swivel-eyed ideologues in this EU referendum debate. And though they would hate to admit it, it is those on the Remain side who are most likely to be impermeable to facts, and who are least likely to have ever held a different view on the EU and been on an intellectual journey to arrive at their present position.

And as a rule of thumb, it is generally wisest to listen to those who can show evidence of having thought deeply about an issue and been persuaded by the steady accumulation of evidence to revise their thinking, rather than those who were born with their deeply-engrained love of the European Union pre-programmed in their brains.

One of the reasons I am proud of my association with The Leave Alliance is the fact that it is full of other people who, like me, have been on an intellectual journey. Sure, some of us saw through the EU from the beginning, but others – myself included – were won over to the side of Brexit by the steady accumulation of incontrovertible evidence.

We count Britain’s foremost authority on the European Union among our number, as well as several independent writers who possess more patiently acquired knowledge about the global regulatory environment than most of the Westminster media combined.

And if nothing else, the fact that the Westminster media failed to cover something as significant as the Leave Alliance launch – despite the fact that it was happening right in their midst – should be enough to convince anyone of the importance of doing one’s own research on Brexit, and not relying on any one single source or campaign when making this most important of decisions.

2 thoughts on “The Leave Alliance Campaign For Brexit: Citizen Democracy In Action”