To say that Breitbart’s James Delingpole disagrees with me about Jeremy Clarkson’s column calling for Britain’s dissolution into a federal European state would be putting it mildly.

While I praised Clarkson for being one of the only people in the whole sorry Remain campaign to honestly and openly admit their love for the European Union, Delingpole accuses him of “chopping off his own balls”:

There are lots of piss-poor columnists out there who you can easily imagine churning out this kind of bilge. But Clarkson really isn’t one of them. For a start, he has forged his entire career on tell-it-like-it-is-outspokenness and political incorrectness (especially where uppity foreigners are concerned). Also, he’s not stupid. The reason his collected columns tend to go to the top of the bestseller lists is partly because they’re funny but partly because they’re true. He has a gift for boiling down the political concerns of our time into a punchy but chatty style, replete with colourful images, witty asides and broad jokes which make them accessible to everyone.

Here, though, he’s not doing any of that. There is no way – in the unlikely event that he could ever bring himself to reread those words – that Clarkson will ever be able to look at that column and go: “Yup. I really nailed it, there.” Because he patently hasn’t. This isn’t just a fail. It is, by some margin, the worst Jeremy Clarkson column ever. Or at least the worst of the many I have read and (invariably) admired.

In fact what strikes me most is that here is the very exemplar of the kind of column you write when your heart just isn’t in it, when you’re making an argument you simply don’t believe in.

[..] I’m not sure I’ll ever be able to look at Clarkson in the same way again, however good his Top Gear replacement series is, because all I’ll be thinking is: “You had a choice, Jeremy. Either to go to the wall for the cause you believe in. Or to sell your soul to something you don’t believe in just because you live near the Prime Minister in the Cotswolds, share the same circle of posho friends and want to curry favour with the smart set.”

By contrast, I remarked:

But what is surprising (and actually rather impressive) is the full-throated way in which Clarkson embraces his support of the EU.

Unlike nearly every leading politician and personality in the Remain camp, Clarkson does not attempt to flatter us or pretend that he “gets” our concerns about Brussels gradually usurping our democracy. Unlike the deceitful-yet-ingratiating Sajid Javid, Clarkson makes no promises to go back to ranting at Brussels the moment he has helped doom us to continued membership of the EU (though in Clarkson’s case, more ranting is all but guaranteed).

Jeremy Clarkson actually does something which almost nobody in the intellectually squalid, fear-based Remain campaign dares to do – he owns his pro-Europeanism and wears it as a badge of honour, rather than doing what so many Turncoat Tories and others have done, prancing around like the World’s Biggest Eurosceptic before meekly running to David Cameron’s heel and supporting Britain’s continued membership of the EU as soon as the prime minister snapped his fingers.

Delingpole is also adamant that Clarkson’s full-throated support of European federalism was part of an effort to ingratiate himself with the prime minister and his circle of friends, whereas I tend to be a bit more generous, believing simply that because they both came of age during a long period of British decline, Clarkson and David Cameron almost inevitably share the same defeatist, pessimistic view of Britain’s capabilities and prospects as an independent country:

Our prime minister and foreign secretary may hold our country, its history and present capabilities in astonishingly low esteem, but fortunately the same cannot be said for many of the people. Many of us correctly believe Britain to be one of the few truly indispensable nations on Earth, that our contributions to the arts, sciences, commerce and global security are almost unmatched, and that we could throw our weight around in the world accordingly, if only we cared to stand up for our own national interest once in awhile.

But such views are unheard of outside the Chipping Norton set, the middle class clerisy in general and the fawning circle of friends and admirers surrounding David Cameron (of whom Jeremy Clarkson is one). These people, many of whom came of age at the peak of 1970s declinism and economic doldrums, have at their core a deep pessimism and scepticism about the ability of Britain to survive and prosper as an independent actor on the world stage.

So deeply have they internalised this self-doubt and self-loathing that no matter how much evidence you show them to the contrary – the examples of Australia and New Zealand, say, somehow surviving in the world without being part of an Asia Pacific Union and sharing a common parliament and court – they bat it away without even stopping to think.

Regardless of his motivation, I still think that Jeremy Clarkson made a more honest case for Britain staying in the EU than nearly anyone else in the Remain camp, with their bogus scaremongering statistics and artfully disguised vested interests.

Whether that happens to be Clarkson’s own honestly expressed view, or if he was channelling the honest view of others (like our prime minister, who is too cowardly to talk frankly about his commitment to Brussels, or nearly any other subject), remains a dirty secret known only to Jezza himself.

And maybe Delingpole is right that the column reads as though Clarkson doesn’t have his heart in it. But still: what other high profile public figure has expressed their desire for Britain’s participation in a federal European state so strongly? The answer is none. Tumbleweeds.

And that alone makes Jeremy Clarkson’s column quite significant, if not personally brave. 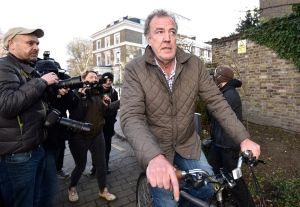