Hipsters can be irritating, yes, but launching a pogrom against them is more than a little bit fascistic

One of the unintended new side-effects of gentrification in London seems to be roving bands of self-entitled class warriors, presuming to speak for the whole city when really they represent only themselves, carrying out Kristallnacht style pogroms against businesses that are insufficiently tatty, cheap or “authentically” working class.

The latest victim is the Cereal Killer Cafe in Brick Lane, a quirky and charming (if thoroughly Hipster-like) establishment selling international breakfast cereals in weird combinations, which I happened to visit for the first time only last weekend.

Hundreds of protesters attacked a cereal cafe in east London on Saturday night, daubing the word “scum” on the shop window and setting fire to an effigy of a police officer.

Riot police were called in to defend the Cereal Killer Cafe in Shoreditch after it was targeted by a large crowd of anti-gentrification activists carrying pigs’ heads and torches.

The owners of the cafe, which has been seen by some as a symbol of inequality in east London, said on Sunday that the attack left customers including children “terrified for their lives”.

Now I’ll be the first to admit that hipsters and their fashions can be annoying, pretentious, infuriating even. But marauding up and down the streets at night wearing masks, carrying flaming torches and breaking windows in response? That goes too far. And yet it is precisely the sort of behaviour we encourage when we indulge in intellectually lazy talk about the supposed “evils” of gentrification – or “social cleansing” as some are now calling it, in an attempt to fill us with the same horror we might feel about ethnic cleansing.

Just as hyperbolic talk about the Evil Tories persecuting the sick and the vulnerable (or acting like the Nazis in their behaviour toward trades union) makes violent resistance seem not only justifiable but downright necessary, so talking about the encroachment of yuppies into formerly seedy (sorry, vibrant) neighbourhoods as though it were the Rwandan genocide all over again is likely to lead to an emotional and excessive response.

Unfortunately, it’s all nonsense. Gentrification is a good thing – not without its drawbacks and unintended side effects, of course, but broadly a great force for good in our city. And while there are real, legitimate concerns about the loss of public land to private developments in our cities, this is not an inevitable consequence of gentrification – most of these problems could be tackled through better zoning and smarter regulation.

Julia Hartley-Brewer puts it best in her riposte in the Telegraph:

When the Left complain about welfare claimants being priced out of expensive central London areas in what they dub “social cleansing”, they say there is something innately good about the rich and poor living side by side. But when the bourgeoisie turn up in traditionally working-class areas (or “up-and-coming” in estate agent-speak) then they are accused of stealing homes from under the noses of the poor.

Would the protesters prefer it if they instead locked themselves and their organic kale away in gated communities in leafy suburbs and never ventured out? The middle class are damned if they do and damned if they don’t.

The truth is that, while gentrification heralds higher house prices, it also brings plenty of economic benefits to an area. Well-heeled new arrivals need labourers, builders, plumbers, electricians, mechanics, childcare and cleaners. They also have a lot more ready cash to spend in local shops, cafes, pubs and restaurants – and their aspirational children push up standards in local schools.

Hartley-Brewer is also right to talk about the increasing “fetishisation” of the working class by anti-gentrification campaigners. The slum clearances which razed Britain’s stock of dilapidated, working class dwellings of the pre-war years were a great step forward, even if they did somewhat undermine the sense of working class community which only came about because of the shared experience of living in a hovel without the basic necessities of life.

And so with gentrification, the problem is not so much that poor people are being forced out of prime areas in the city, and more to do with the fact that the inadequate policies of successive governments have failed to increase the supply of housing in line with demand.

This is a point I made in a TV debate last summer with Ian Dunt of politics.co.uk:

Once you strip away the hysterical screaming about poor being being “socially cleansed” from inner London, it really comes down to two simple questions: should city leaders and planners actively discourage economic development and the regeneration of neighbourhoods, keeping parts of London in grim dilapidation so that they remain affordable for the poor? And should the British taxpayer be expected to continue subsidising the housing costs of people who cannot afford to live in central London on the fruits of their own labour?

The answer to both questions is a resounding and heartfelt “no”. The revitalisation of London districts like the Docklands and parts of Hackney is a great tale of success, an achievement we in Britain should celebrate, not run away from. Some of the artisanal coffee shops may be a little too much, but they and their skinny jean-wearing customers are certainly a price worth paying for the economic development that they signify.

Besides which, London is (and our other great cities are too) a continually changing kaleidoscope, not a fixed and inviolable masterpiece on canvas. As I pointed out in the TV debate, “hipsterisation” is just part of the process where rough and often frankly unpleasant areas are first colonised by hipsters, the worker ants of gentrification, who bring neighbourhoods up to an acceptable standard before they in turn are priced out and displaced by the bankers and others on higher salaries. The displaced hipsters then move on to a new area, performing the same invaluable service for another area. It’s a never-ending cycle.

And yet many on the Left do not see it like this. As with so many other drivers and signifiers of human progress, they prefer to stand athwart history (and economic development) shouting “stop!” rather than try to ensure that it delivers the most good for the most people.

Usually the Left can be found screaming blue murder about inherited privilege and the restriction of privileges to the wealthy few. But oddly, these same people often turn a blind eye when it comes to subsidised social housing in the heart of the capital city, where all taxpayers (rich and poor, urban and rural alike) effectively pay for some chosen people to live in the heart of the greatest city on earth, while never having the chance of doing so themselves. 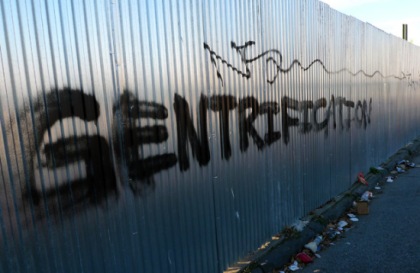 Some people in London’s council estates sullenly claim the right to live where their families and friends have lived – their inherited privilege – while expecting privately renting and homeowning Londoners (who often live less centrally) to subsidise and maintain their good fortune. How is that attitude not condemned for its selfishness?

That’s not to say that there are no advantages to socially mixed areas with rich and poor living side by side – there are, and we lucky middle class people can hardly turn to others for solidarity when we are priced out of our own neighbourhoods by wealthy Russians (or French people fleeing President Hollande’s punitive taxes, in the case of my own neighbourhood) if we do not speak out against the scandalous lack of new homes being built in cities with the highest demand.

And I said as much during the recent battle over the future of the New Era housing estate in east London:

In truth, we all have a stake in this fight, whether we are homeowners or renters, urban dwellers or country folk. Every day, we bear witness to the unstoppable forces of globalisation and capital flows which are dramatically reshaping our world, often for the better, but which our leaders often seem impotent to control. These forces may not be coming for our own homes, jobs, or livelihoods – yet. But when they do, who will fight for us tomorrow if we fail to stand up for those like the New Era residents, who need our support today?

But again, this is not about gentrification per se. Rather, it’s about housing policy in general – how many new houses are built, where they are built and who is allowed (or encouraged) to buy them. Fix those policies and gentrification becomes a welcome friend, not a sinister enemy.

But we do not seem to want to fix the problem. We continue to elect anti-growth, NIMBYish politicians who are all for a massive housebuilding programme, just so long as it does not touch their own constituencies. And the fortunes of existing homeowners are tied to ever-increasing house prices at the expense of those trying to get on the first rung of the housing ladder.

These are real, intractable problems, none of which will be solved by vandalising a shop front and scaring the terrified hipsters inside. If the mob who made up the elegantly-named “F*ck Parade London” had a brain cell to share between the lot of them, they would realise this, and focus their ire on the people with real power over housing and development in London and across the country.

Giving the trendy hipsters of Shoreditch a fright may have been cathartic for the few hundred people involved in the disturbance, but it does nothing nothing to tackle the negative side effects of gentrification. And until they change their mindless tactics, the Fuck Parade should be seen not as high-minded social justice warriors, but as the virtue-signalling thugs that they are.