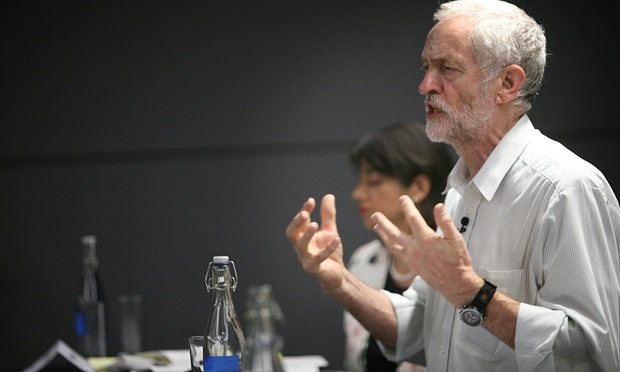 A version of this article was first published on the Conservatives for Liberty blog.

A top-down reorganisation of Britain’s education system, giving the state full control over education at all levels and for all ages would be a terrible, frightening idea. But could conservatives pick up Jeremy Corbyn’s proposal for a National Education Service and give it a libertarian twist to inspire a genuine consumer-focused revolution in life-long learning?

Whether you hail Jeremy Corbyn as the left wing saviour of British politics or intend to hide behind the sofa on 12 September lest his election as Labour Leader ushers in a dark new era of Soviet communism, no one can deny that Corbyn’s candidacy has brought a certain level of partisan excitement back to drab, consensual British politics.

But as always happens when an outsider threatens to show up the bipartisan political elite and their soul-sapping sameness, the media has focused on whipping up hysteria about some of Corbyn’s off-the-cuff pronouncements, like his remark that we might potentially learn something from Karl Marx (as though we can only learn from historical figures who we 100% agree with) or twisting Corbyn’s words to suggest that he supports re-instating Clause Four and the historic Labour commitment to public ownership of industry.

You don’t have to be a fully paid-up Tory to realise that this headline-bating and click-chasing detracts from the serious discussion of any policy specifics which Corbyn has announced, and which might lead to the start of a real debate if only the media did their job properly. Take Jeremy Corbyn’s recent proposal for a National Education Service to rival the National Health Service.

While failing to provide many concrete details of what this “cradle to grave” education system might look like, Corbyn did offer this glimpse:

Fifty years ago, the Labour government of Harold Wilson sought to address this problem for its time, and under Jennie Lee in 1965 started the work to establish the Open University – one of the most under-rated achievements of Labour in government.

Fifty years on, it is time to start putting the case for investment in learning from cradle to grave. A National Education Service would be every bit as vital and as free at the point of use as our NHS, and should be delivered by the end of the next Parliament.

[..] A National Education Service will give working age people access throughout their lives to learn new skills or to re-train. It should also work with Jobcentre Plus to offer claimants opportunities to improve their skills, rather than face the carousel of workfare placements, sanctions and despair. We need a return to ambitious joined-up government.

It would be easy for Conservatives to dismiss this idea as the socialist ravings of an unrepentant Big Government apologist. But while Jeremy Corbyn’s ultimate vision for a joined-up National Education Service for Britain might horrify those of us who believe in individual freedom and personal responsibility, we would be missing an opportunity if we ignore Corbyn’s proposals altogether. After all, many small government conservatives and libertarians are squeamish about centralised, government-provided healthcare delivered by the NHS, but this doesn’t mean we are against good healthcare being available to all citizens at every stage of their lives.

Well, for a start, almost all of the provision would be outside of the state – including primary and secondary education. Providers could and should be welcomed from every background – nonprofit groups, commercial providers, academies, charities and faith communities – so long as they maintain a commitment to provide rigorous and non-discriminatory education to every child or adult learner, drawing from best practice around the world and in full accordance with British values.

But how would such a scheme work?

Parents and adult learners are most empowered when they are given true choice, and this leads almost inevitably toward some kind of voucher system. Clearly this would need to be thought through carefully, in order that the net effect of changes is cost-neutral or better. But it would seem to make logical sense for parents to be given vouchers covering the yearly cost of education at any state accredited school for each child up to the age of sixteen, and to the child themselves for their final two years (full time education to be compulsory to the age of eighteen).

Universities are currently trapped in a ghastly no-man’s land when it comes to their funding, charging government-capped fees but also receiving further government financial support – which can be turned off, like gas pipelines from Russia, if the government deems the university to be failing to hit the diversity quota of the day or other arbitrary performance metrics. Under a Tory National Education Service, Britain’s world-leading universities should be freed from all micromanagement and allowed to take the brightest and best from any background. A certain proportion of each year’s intake should be UK students paying tuition with vouchers, and the remainder international students at market rates.

Would this mean the automatic end of tuition fees? This blog believes that tuition fees are right and proper, as a university education confers a significant advantage on the degree holder, one which should not be subsidised by those who choose other paths. Therefore, vouchers covering university education after leaving school should be purchased by the student, with low-interest loans available to all for the purpose. Though the mechanism would change, the outcome for the student would remain essentially unchanged – university education free at the point of use, repayable through a loan system.

Recognising the fact that our globalised world requires an adaptable workforce and that our whole society benefits when grown adults are not trapped in never-ending minimum wage drudgery, adults over the age of 25 (or 18 for non university students) should be given additional accumulative “top-up” vouchers every five years, to be saved and spent on any continuing education provision – at night school, universities or online courses – as they progress through their lives. Under such a system, nobody would have the option of becoming dependent on welfare due to redundancy or the decline of any one specific industry, and it would never be “too late” for anyone to change careers.

The details – and the funding – for a private-run National Education Service of this type would need to be worked out in painstaking detail to prove viability. But there is a potential framework here for the state to ensure that its citizenry is well-educated and adaptable, without becoming overwhelmingly involved in the detail of what is learned or how the knowledge is delivered.

Some purists might argue that even this light-touch National Education Service is too interventionist, too Big Government, and insist that the unregulated free market alone can be relied on to provide educational services. And they would be right. But they forget that the labour market in question is global, not national – the free market will doubtless produce the types and numbers of skilled workers that it requires, but it will do so with no regard to national borders, and no regard to Britain.

Libertarians and small government conservatives do not say that there is no role for the state, but simply that government should act small, and act smart. A conservative National Education Service would recognise the necessary role that government has in ensuring a secure and prosperous society, while keeping the freedom and the responsibility for education squarely in the the people’s hands. Would such a system not be better than the status quo, with our universities semi-dependent on government funds and forced to follow government diktat, and state-run mediocrity afflicting too much primary and secondary education?

The fact that some variant of Corbyn’s idea – or any significant education initiative post Michael Gove – has not already been picked up and co-opted by the Tories reveals a worrying lack of ambition at the heart of this Conservative government. George Osborne is praised for his political brilliance when, on a whim, he decides to introduce a national living wage, thus contradicting years of principled conservative opposition to wage controls, and yet when it comes to a National Education Service he ignores a real chance to seize the initiative on a traditionally Labour issue, delivered with a true conservative twist – being for education but against big government provision.

By stealing Jeremy Corbyn’s thunder and proposing their own, radically different version of the National Education Service, the Conservative government has a golden opportunity to steal Labour’s unearned reputation as the party of “education, education, education”, and do so without making the ideological sacrifice of adopting Labour’s big government policy prescriptions.

Pledging to build an NES would demonstrate that the Tories can ‘care’ and be compassionate, but do so without ramping up the size of the state, creating vast new bureacuracies or encouraging systemic inefficiency. Left-wingers may hate the private provision aspect, but they would love the idea of a cradle-to-grave service available to all citizens. And that might sway just enough votes to pass real education reform, the kind of Apollo Program for education that Britain needs to become the world’s premier knowledge economy.