When parliament reconvenes, an astonishing fifty-six Scottish National Party MPs will take their seats in the House of Commons.

This is mostly hubris. The SNP will be sitting on the opposition benches, which means that they actually get to sit things out for the next five years, spectating rather than playing some kind of deep and meaningful role in government – that particular dream died the moment that Ed Miliband’s Labour Party self destructed north and south of the border.

But though the SNP landslide is largely thanks to irrational voting by Scotland – a collective hissy fit from a nation who increasingly consider themselves more enlightened and progressive than their southern neighbours, demanding higher government spending paid for by anyone but themselves – there will naturally be an impact on the way that Westminster operates.

In terms of accepting the new reality, this piece from Alex Massie in The Spectator is right on the money:

The referendum taught us that Scotland is a place beginning to dream bigger things; yesterday’s results confirmed that. The SNP’s victory is a reminder that trust is the most valuable commodity in politics. Because the SNP are trusted – rightly or not – to put Scotland’s interests first they are forgiven their sins, contradictions and inconsistencies. They are held – fairly or not – to a different standard than that applied to other parties. There is little point in whining about this; it is just the way it is.

The SNPs main stated goal so far is to press for further devolution of power from Westminster to the Scottish Parliament, something that David Cameron has already stated he wants to do. From the BBC:

Speaking to the BBC’s Andrew Marr programme, Ms Sturgeon said Mr Cameron did not appear to want to move beyond powers already outlined in the Smith Commission, which was formed after the independence referendum to fulfil the pledge to give Scotland further devolution.

She said: “What we will argue for is priority devolution of powers over business taxes, employment, the minimum wage, welfare, because these are the levers we need to grow our economy to get people into work paying taxes and lifting people out of poverty.

Elsewhere in the interview, Ms Sturgeon was asked whether a UK government offer of full fiscal autonomy – the devolution of all tax and spend powers – within two years would be a “good deal” for Scotland.

She replied: “It would be the responsibility of the Scottish government and our MPs down in the House of Commons to make sure we get a good deal.”

Full fiscal autonomy is a non-starter. Though Scotland (together with the other home nations) should certainly be given more power to determine questions of welfare and the minimum wage, as is the case with American states, there must always remain a UK-wide common element of taxation in order to fund those areas reserved to the Westminster government – defence, foreign policy and critical infrastructure. Scotland cannot simply “opt out” of contributing to the national defence, for example, free riding on the rest of the United Kingdom.

More importantly, each further transfer of powers from Westminster to Scotland only increases the deep unfairness to the people of England, all of whose affairs continue to be determined by the UK parliament. This is why focusing on Scotland alone is the wrong approach, no matter how much noise Nicola Sturgeon’s 56 Westminster MPs make. What we need now is a UK-wide constitutional convention, determining once and for all the proper role of government at the Westminster, home nation, county and city levels.

But what of the powers that Scotland already has? The SNP and their politics of grievance and oppression is based in part on the lie that austerity has been imposed unilaterally on the people of Scotland by a remote Westminster government in England. This ignores the fact that there is a stubborn minority of Scots who remain proudly conservative, whose views are completely overlooked by a Scottish National Party who claim to speak for all, but really represent only a snarling form of angry socialism.

But more importantly, it overlooks the fact that the Scottish Government already has the power to take action to limit austerity north of the border. You’ll never hear it mentioned by Nicola Sturgeon, but there is already provision for the Scottish Government to set a “Scottish Variable Rate” of income tax, increasing or decreasing the basic rate of income tax by up to 3 per cent.

This is a significant power, one which the SNP government in Scotland has signally failed to use, despite taking every opportunity to bleat about the impact of austerity on the poorest and most vulnerable in society. If austerity really is such an unmitigated evil – and to many on the intemperate left, it is not just wrong but actually evil – why has Scotland not already used its existing powers to defray the impact by increasing their basic rate of income tax to pump more money into public services?

The answer is sad and obvious, and it leads to the cynical heart of the Scottish nationalist mindset. The SNP hates austerity, yes. Viewing themselves as more enlightened and compassionate than the rest of the UK, they want a perpetually bigger government, delivering more services and playing a larger role in the lives of ordinary Scots. But they don’t want to pay for it themselves.

Presented with the opportunity to limit austerity by increasing Scottish  income tax to help the poor, the SNP declined. Because they don’t want other Scots to pay for their bigger government – they want the rest of the UK, who will not see any benefit themselves, to foot the bill.

Deeply selfish and single-mindedly obsessed with the narrow interests of their base over the national good – though they come from the complete opposite end of the political spectrum, more and more the Scottish National Party are coming to resemble the Tea Party movement, which upended American politics during President Obama’s first term.

Both are fanatically convinced of the righteousness of their cause, and the moral deficiency of their opponents. Both claim a mandate to influence the direction of national government despite being relegated to the opposition benches. And increasingly, both see compromise or any dilution of their goals as tantamount to treason or betrayal of the cause. 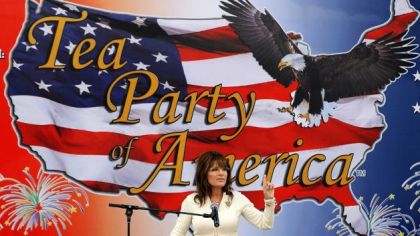 Make no mistake, this will have an impact on the way that Westminster operates for the next five years. The Scottish National Party will arrive back at Westminster with nearly as many MPs as the Liberal Democrats boasted in 2005 (56 to the LibDem’s 62). Back in those heady days, the LibDems enjoyed senior positions on parliamentary committees, and their party chiefs were given guaranteed speaking time during Prime Minister’s Questions. The SNP are likely to demand at least this much, if not more.

In the very best case scenario, this will just means lots more tedious speeches in the House of Commons about the non-existent oppression of the Scottish people. A more likely scenario will involve the SNP caucus engaging in significant mischief-making, partnering with Labour, the minor parties of the left or rebelling Tory MPs to defeat the government on multiple pieces of legislation.

But it is also possible that the SNP could use their Westminster clout to achieve their real objective – leveraging their air of moral superiority and victimhood complex so skillfully that an enraged English population seeks to forcibly eject Scotland from the union, the outcome of the 2014 referendum be damned.

The incoming SNP 56 are relatively inexperienced in the ways of Westminster politics, which also presents the possibility of refreshing change. Too often, the Commons looks and acts more like an elitist private members club, fussing about its ancient rules and traditions above attending to the pressing business of the nation. A louder voice for Scotland in parliament is not necessarily a bad thing, particularly if it helps to usher in a new federal structure for the UK, guaranteeing fairness for all home nations and the long term survival of the union.

But whether the SNP landslide represents a positive step toward resolving the UK’s constitutional quagmire depends on which SNP turns up in Westminster. Will it be the moralising, ideological socialists who so irritated the English during the 2014 Scottish independence referendum, or a nationalist caucus with some sense of humility, understanding that they have come to participate in the legislature of our shared United Kingdom, not to act as a professional irritant or mouthpiece for narrow sectarian interests?

If it is the latter, the next five years need not be a hellish period of partisan gridlock and the further undermining of our shared union. But if the SNP come determined to be the Tartan Tea Party of the left, using their tiny share of the national vote to wield an outsized influence in the affairs of England, then all bets are off.

Either way, once the celebrations in CCHQ die down, David Cameron completes his cabinet reshuffle and the other parties have elected new leaders and learned the painful lessons of defeat, we must all turn our attention toward the Tartan Tea Party marching down from Edinburgh.