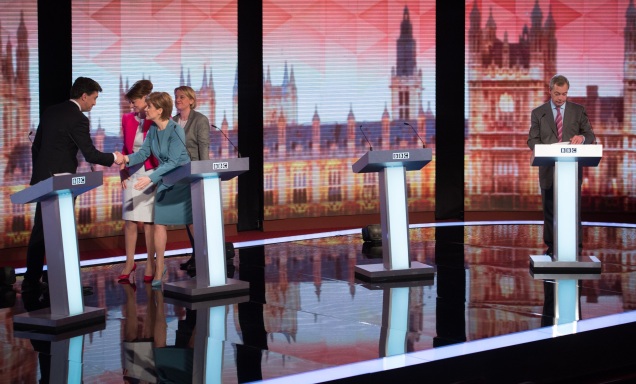 “Work with us to keep the Tories out of government!”

“If we work together, we can lock Cameron out of Number 10.”

“We have a chance to kick David Cameron out of Downing Street. Don’t turn your back on it, people will never forgive you…”

To watch the leaders of Labour, Plaid Cymru, the SNP and the Green Party plead with the audience – and each other – at last night’s BBC Election “Challengers” Debate, you would think that Britain faced the awful prospect of some fascist or totalitarian party seizing power on 8 May this year, thus requiring all decent people to put aside their differences and band together in solidarity against a visceral, urgent threat to our way of life.

But the hideous spectre conjured by Ed Miliband, Leanne Wood, Nicola Sturgeon and Natalie Bennett is not a latter-day Adolf Hitler or Joseph Stalin – or even a contemporary African tin-pot dictator. No, we are asked to believe that the mortal threat to Britain and her people comes  in the pale, patrician form of David Cameron – who has already held the top job for five years without successfully summoning the apocalypse – perhaps propped up by the equally unthreatening Nigel Farage (Nigel being just the type of fearsome name that strikes terror into the heart of even the bravest soul).

The British left is used to preaching to the choir and percolating in its own intellectual laziness, having long ago purged from the bubble anyone who doesn’t reflexively Hate the Tories and abhor right-wing ideas. But today we witnessed Britain’s four left wing party leaders construct and imprison themselves in a bubble of their own making, right on the stage at Westminster Central Hall.

During the 90-minute programme the Labour leader faced repeated calls from Nicola Sturgeon and Leanne Wood to reject austerity and form a “progressive” alliance with their parties and the Greens to keep the Conservatives out of government.

The two nationalist leaders and Ms Bennett said they would not prop up a Conservative government.

Ms Sturgeon claimed Mr Miliband was “so scared to be bold” that he was “not even doing the right thing by the NHS”, telling the audience that “if Labour won’t be bold enough on its own, I think people should vote for parties that will hold Labour to account and make them bolder”.

At times, the UKIP leader seemed uncomfortable in his role as sole champion of the centre-right, struggling to gain traction against the arrayed forces of the far-to-centre-left.

Much is now being made of the fact that Nigel Farage called out the clearly unbalanced weighting of the live audience (raucous cheers for anything redistributionist, but stony, sullen silence at the slightest mention of personal responsibility or smaller government) – a fact that the BBC’s David Dimbleby, apparently eager to focus on process over substance, was eager to rebut at length, eating into Farage’s time.

From the Telegraph’s review:

During the debate, between the Leaders of Labour, the Greens, the SNP and Plaid Cymru as well as Ukip, Mr Farage was attacked by the other participants and then booed and jeered as he sought to blame pressure on the housing market on immigration.

“There just seems to be a total lack of comprehension on this panel and indeed this audience, which is a remarkable audience even by the left-wing standards of the BBC,” he said. “I mean this lot is pretty left-wing, believe me.”

Mr Miliband told him it was “never a good idea to attack the audience,” as presenter David Dimbleby insisted the group was independent.

In a depressing way, Ed Miliband was right – the Labour Party leader would certainly never risk alienating the audience by telling them difficult political truths. Though he is getting better at feigning seriousness by dropping his voice a few pitches and beginning every sentence with the patronising word “Look…”, when push comes to shove Miliband would probably follow the audience even if they all lit torches and marched en masse to burn down CCHQ, flattering them and promising them free perks from the state every step of the way.

But as it happened, it was Plaid Cymru’s Leanne Wood who again mounted the surprise left-wing attack of the evening. From Rhiannon Lucy Cosslet’s misty-eyed review in the Guardian:

Calm, though occasionally slightly hesitant, Wood spoke with great feeling, underlining Plaid’s commitment to a post-austerity Wales, her passionate belief in the importance of the welfare state, and her obvious disdain for the divisive anti-immigration politics of Farage, or “her friend on the far right”, as she scathingly put it (I cheered).

“You abuse immigrants and those with HIV and then complain Ukip is being abused,” she told him, with fire in her voice. Like Sturgeon, she pointedly failed to shake his hand before walking off stage.

It was clear before the debate even began that whatever the four smaller party leaders might do to gang up on Ed Miliband, the real story would be the four-against-one  anti-UKIP coalition which slowly formed, and finally culminated in warm hugs and self-congratulatory applause as the credits rolled.

Indeed, prior to the debate, even Ed Miliband’s traditional left-wing antagonists like Dan Hodges were baying for him to rip chunks out of the UKIP leader in a bid to shore up his left flank, as though this would demonstrate Miliband’s swaggering virility:

Labour supporters are hungry for Miliband to take Farage on, especially after Leanne Wood bravely confronted him over his policy on HIV sufferers. But Miliband is cautious of alienating potential Ukip switchers. Included amongst the “happy warrior” notes he left in the studio after the previous leader’s debate was the lukewarm put down “I’m not going to call him [Farage] a racist but I am going to call him ridiculous”.

No. What’s really brave is walking into a hostile room where the majority of people despise you and everything you stand for, and still daring to suggest that if we are to have a national health service, it should perhaps be run for the benefit of the citizens of the country who have paid into that system with their taxes, and not for the benefit of non-citizens and health tourists.

Was it necessary to use the example of HIV sufferers, whose plight both Nigel Farage and Douglas Carswell strongly empathised with during (or in Carswell’s case, afterwards on Question Time) last night’s debate? Perhaps not – indeed, Farage himself reflected that it might have been less controversial, though also less effective, to use the example of tuberculosis. But the point stands, even if it was inartfully made.

It’s very easy to walk into a receptive room of people and sound compassionate by making extravagant promises to spend other people’s money – any old fool can do that. It’s much harder to walk into a hostile room, knowing that it is unlikely your viewpoint will be given a remotely fair hearing, and still dare to speak your mind, telling people difficult truths.

Over half of British citizens currently receive more in benefits from the state than they contribute in taxes. Promising to tax the other 48% even more to stop that 52% from colliding with reality is the political path of least resistance, eagerly trodden by Ed Miliband, Leanne Wood, Natalie Bennett and Nicola Sturgeon. Agree with him or not, Nigel Farage has more political courage in his little finger than all of them put together.

When will this anti-Tory, anti-conservative hyperbole end? Probably never – for as long as there are well-meaning but uncritical people eager to flaunt their humanitarian credentials by spending other peoples’ money without putting in much effort of their own, there will be left-wing politicians lining up to whip them into a frenzy of righteous indignation.

But we may, at long last, be reaching a point where anti-conservative hysteria and scaremongering ceases to pay such huge political dividends, or win elections quite so handily. After all, the British love an underdog and the sight of one man being treated like a political piñata by an alliance of left-wing zealots will have stirred some sympathies, even among those not normally receptive to the Conservative or UKIP message.

This can only be a good thing. The British left is not without good ideas and admirable qualities, but these are frequently tarnished or overshadowed by the ugly enviousness and uncritical sanctimony that too often take the place of reasoned argument and respectful disagreement.

In the penultimate debate of the 2015 general election campaign, the British people sat and watched the unedifying spectacle of Britain’s left-wing party leaders jostling with each other for the coveted  title of Most Anti-Tory Zealot, while being only too happy to malign the character and motivations of anyone whose political compass leans even slightly to the centre or centre-right.

But conservatives are human beings, too. Many of them are just as concerned with the plight of the poor, the vulnerable and the disadvantaged as their fellow citizens on the political left – though their proposed solutions and vision of the model society are radically different. Their failure to jump on board the Labour, Plaid Cymru, Green or Scottish National Party bandwagons is a case of simple, honest political disagreement – not shocking evidence of selfishness or moral turpitude.

For all the shrill rhetoric about UKIP scapegoating immigrants or the Evil Tories hounding the destitute, there is indeed an increasingly intolerant group of Britons, convinced beyond all reasoning of the righteousness of their cause and only too quick to despise and malign the “other”.

You’ll find them proudly voting against “Blukip” on May 7.