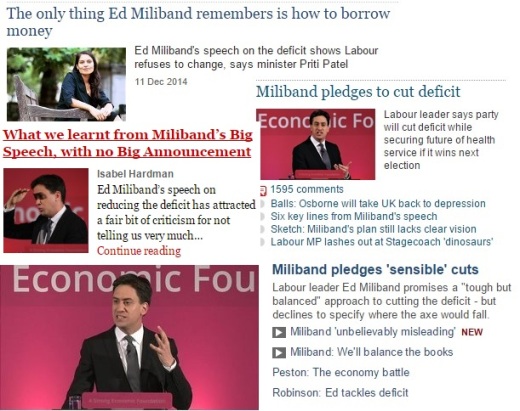 How many times have we been told to expect a “big speech” from Labour’s ex-Leader in waiting, Ed Miliband?

Today is the day when Ed Miliband finally gets serious and fires the starting gun for the 2015 general election campaign, we were told. This is the day when the Labour party will stop being scared of its own shadow or apologetic for its past, and tackle the issue of Britain’s persistent budget deficit head-on. In fact, the latest oration by Miliband was so heavily trailed by Labour’s press team that even seasoned and cynical Westminster reporters were teased into expecting some kind of new policy proposal or big announcement. And what did we get? The same lack of specifics and anticlimactic sense of time wasted that Ed Miliband always manages to evoke.

This blog has long pointed out that Ed Miliband wouldn’t know a great political speech if one jumped off the teleprompter and hit him square in the face – a typical Miliband speech is a more or less random assortment of short, standalone platitudes, focus group-tested to ensure their bland inoffensiveness, and none of which exceed ten words so as not to tax the brain of the listener, whose intelligence is so rudely and continually insulted. This being so, it was a pity to see much of the mainstream press, starved of inspiring political oratory for so long, lazily repeating back the assertion that this was indeed a Big Speech by Miliband, just because the Labour press office labelled it so.

It’s always hard to pick highlights from an Ed Miliband speech, but here is the section where Miliband supposedly got to the heart of the matter in addressing the budget deficit (the nauseatingly ubiquitous line breaks, intended to convey profundity, have been removed to make the words legible):

We will make different choices. So we will levy a Mansion Tax on the most expensive homes over £2 million and clamp down on tax avoidance to help fund the NHS. We will have a tax on bankers’ bonuses to help fund a programme to put young people back to work. We will close boardroom tax loopholes to abolish the bedroom tax. We will not go ahead with a further cut in Corporation tax so we can instead cut business rates for small firms. And we will reverse the millionaires’ tax cut and ensure that those with incomes over £150,000 pay the 50p tax rate to contribute to deficit reduction.

Notice anything new? Indeed not – this is the same tired old collection of sulky anti-Austerity rhetoric that Labour has been peddling since 2010. The creation of an alternative universe where current levels of spending can be maintained if only we “clamp down” a little harder on tax avoidance. Another promise to tax bankers bonuses, with the resulting revenues now pledged to at least five different gimmicks. The pretence that rolling back Gordon Brown’s envious, spiteful 10-point hike in the top rate of income tax somehow amounts to a “tax cut for millionaires”. And, of course, the use of the magical letters NHS as a bludgeon to stop any further argument in its tracks. These were the pressing reasons that Ed Miliband summoned the press corps to hear him speak in London.

And here is Miliband’s now-familiar dig at the Tories:

These changes are necessary to balance the books. The Tory 35 per cent strategy is not. Their strategy would mean overall cuts of an unprecedented scale. The equivalent of more than the whole budget for schools. Or three times more than the entire budget for social care. Or nearly half of the budget for our NHS. I want the British people to know what this really means: it is a recipe for the disintegration of our public services.

Ed Miliband also employed the same disingenuous verbal sleight-of-hand crafted to perfection by David Cameron, speaking earnestly about “dealing with our debts” while knowing full well that his plans (such as they are) don’t even seriously tackle the annual budget deficit, let alone the ever-expanding national debt.

But what Miliband’s latest speech really reveals is the extent to which the Labour Party has absolutely nothing to say about the portion of the economy not given over to government spending and service provision. Having droned on and on for nearly five years about the impact of coalition spending plans on our precious public services, Labour has completely forgotten how to talk about the private sector (other than to criticise and threaten it), or how to address the fears and aspirations of those people for whom government services and benefits are not the be-all and end-all of life. Sure, pledging to clobber the rich and protect “our NHS” may raise a cheer from the party faithful, but it is of starkly limited use when trying to connect with white van man, Essex Man or whatever other label you choose to describe the hardworking, aspirational, upwardly-mobile bloc of voters that both Thatcher and Blair courted so effectively.

Viewed objectively, Ed Milibands latest speech on the economy can be seen as nothing more than a complete failure to outline an alternative plan and re-establish economic credibility. And yet much of the press gave him a free pass, as they did with his recent failure to relaunch at Senate House.

That said, Mr Miliband and Mr Balls have a good case. The Labour leader has learnt the lesson of his party conference “walk and talk”, when he forgot to mention immigration and the deficit, by sticking to a prepared text. That text was unspecific but well argued, and succeeded in making Labour’s position “sort of clear”.

Meanwhile, the BBC gave Miliband kudos just for remembering to mention the economy at all:

The strategic aim of “the speech that remembered the deficit” is not just to convince wavering voters that Labour is serious about cutting borrowing, but to allow them to argue that, unlike their opponents, they won’t risk public services or the the public finances when they do it.

And even The Spectator sees Miliband’s glass as half full rather than completely empty:

But it’s unfair to say that this was a useless speech as it did articulate better than previously the Labour leader’s basic vision for the economy. It started with Miliband saying ‘my speech today is about the deficit’, just so it was clear that he wasn’t going to forget it this time around. He managed to articulate with greater confidence before what Labour sees as the difference between good and bad borrowing. Good borrowing is for capital projects, with Miliband saying ‘productive investment in our infrastructure should be seen differently from day-to-day spending because it often has a greater economic return’ …

The Labour leader also clearly sees one of the Tories’ favourite pledges as one of the best ones to exploit: tax cuts. He told the audience ‘their priority is unfunded tax cuts, my priority is to save our National Health Service’.

The Tory-supporting papers did a better job of holding Miliband’s feet to the fire, but even they were too generous by treating his ramblings on the deficit as an actual political speech containing ideas worthy of analysis and discussion, and the man who delivered them as a real leader of a still-serious political party.

But the Labour Party is not being serious at the moment; nor has it had a real leader in some time. Ed Miliband, the passionate nonentity at the top of today’s Labour Party, is an uninspiring technocrat whose tunnel vision prevents him from even recognising the existence of a Britain beyond his comfort zone of government spending cost centres and public service providers. Tax cuts or spending increases are viewed only through the prism of the effect they will have on these sacred public services, because in Ed Miliband’s mind, that’s all Britain is – a drab collection of schools, hospitals and council offices somewhere off the northern coast of France.

Ed Miliband has long since proved that he has nothing of value to say to the productive part of Britain’s economy – the small businesses, entrepreneurs, artists, visionaries, sole traders and growing companies of the future. That’s nothing new. But how much longer can we continue to take him seriously now that he has apparently forgotten they even exist?

3 thoughts on “Ed Miliband Talks About The Deficit, Says Absolutely Nothing”