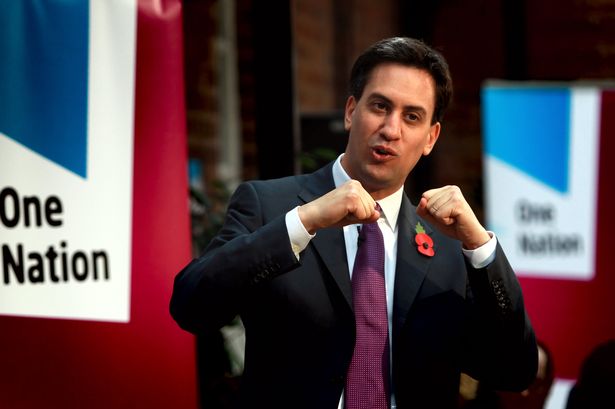 Good news, everyone. Ed Miliband has solved the youth unemployment crisis in Britain. I guess he was lying in bed last night and the ghost of Michael Foot visited him and told him what had to be done to make everything better again.

Once he and his merry band of super-competent cabinet colleagues are sworn in as the next government in 2015, everything will be fine. Rainbows will appear in the sky and bunny rabbits will hop across the land. We know this because, at the one-day Labour Party conference in Coventry today, Mr. Miliband unveiled his “real jobs guarantee”.

The nasty Conservative Party, of course, likes young people to be unemployed. It gives us right-wingers a kick to pay taxes so that people can receive Jobseekers Allowance indefinitely.

His plan – to give every young person who has been unemployed for 12 months or more a guaranteed internship with a company, paid at the minimum wage – would be paid for by another £600m arbitrary raid on bankers bonuses.

“To business we say, we’ll pay the wages, if you provide the training … To young people: if you’re out of work for a year we’ll guarantee you the opportunity to work.”

The BBC article goes on to mention:

“Those taking part will be expected to turn up for work, as well as looking for a full-time job and complete training, or face “tough consequences” – including possible benefit sanctions.”

What other tough consequence could there possibly be for failing to turn up for work or complete the other requirements for receiving government benefits, other than to lose those benefits? Being scolded by someone at the Job Centre? Being sent a letter of disapproval? Anyway.

I almost don’t feel as though it is worth delving into the flaws in this dystopian policy, especially given the fact that Labour’s deputy leader, Harriet Harman, was apparently clueless when it came to how much the scheme would cost, and whether this cost would be fully met by their proposed one-time (but seemingly all-the-time) tax on bankers’ bonuses.

Nonetheless, a couple of points of rebuttal, just to go through the motions:

1.Guess what, not all “bankers” had a hand in bringing about the global economic downturn. In fact, a lot of people in quite a lot of industries, and government positions also had a hand in it. So when will the Labour Party get over trying to use banks as a piggy bank to raid at will to fund their latest scheme? Gordon Brown was either Chancellor of the Exchequer or Prime Minister for the decade leading up to the collapse, so how about we also arbitrarily add a 10% tax surcharge on all of his future income to help him atone for the consequences of his calamitous incompetence?

The time to extract penance from the banks was at the time of the bailouts, but it didn’t happen. The Labour government missed the opportunity. Businesses cannot plan for the future and grow and prosper if they don’t know if they will be hit by a new punitive tax at any moment to fund the latest socialist pipe dream. Should the country have extracted more of a toll from the financial sector at the time? Almost certainly. But we didn’t, and now it is too late, and we have Gordon Brown and his heirs and successors in today’s Labour Party to thank for it.

2. This policy is so vague as to be worthless. Mr. Miliband says that “saying ‘no’ is not an option”, but doesn’t outline the consequences of saying no. After never once having gotten tough before in their history, does anyone really expect that this Labour policy, if implemented, would actually have any real teeth?

3. Youth unemployment currently stands at around 22.5%, or 1.042 million people. How, exactly, is a future Labour government going to coerce enough firms to take people on in order to reduce this to 0%? The answer is, of course, that they won’t. And if they even come close, it will only be because they bully firms into taking on people to do non-jobs that are of no training value, just to help the government meet its target.

4. Go away, and come back when you have a real jobs policy or any kind of plan that will actually solve the problem of youth unemployment. And in the meantime, perhaps stop demonising the current government’s “Welfare to Work” plans, which are much more cost-neutral and much more likely to succeed.