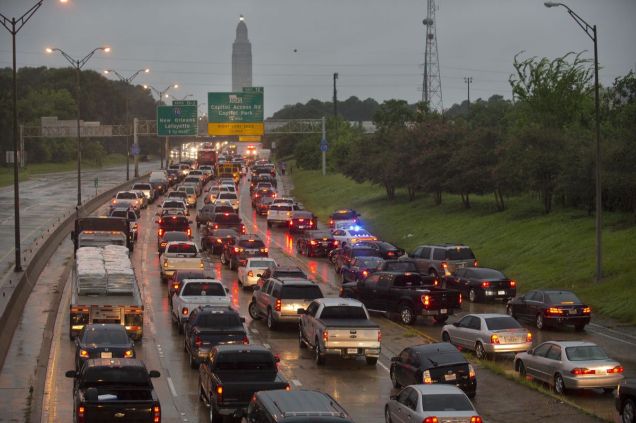 Make politics petty and unpleasant enough, and soon all that will be left are the pettiest and most unpleasant of people

Rod Dreher offers this meditation on patriotism, viewed through the dual lens of the US presidential election and the catastrophic flooding currently affecting his home state of Louisiana:

Checking just now, I see that Trump has put out seven tweets in a row this morning, whining about how mean the news media is to him. Not a single word about Katrina.2 here in Louisiana. To be fair, Hillary Clinton hasn’t said anything about it either, but her Twitter feed is managed by campaign drones. Trump does his twitter feed himself. I kid you not, as I sat at the stop light at the corner of Airline and Old Hammond Highway, waiting to turn, I looked over at the spot where those three law enforcement officers where shot dead last month, and I thought about all the poor, desperate people I had just seen at the shelter, and all the good men and women of Louisiana spending their Sunday morning doing whatever they can to help their neighbor, and I thought Donald Trump can go to hell.

Honestly, with so much suffering in this country now — acutely here, right now, in Louisiana, but people are hurting all over (seen the news from Milwaukee today?) — all that fathead can do is gripe about how mean the news media are to him. It’s disgusting. I have not been a #NeverTrump conservative, and don’t really care to be part of that crowd now, even though I cannot imagine voting for Hillary Clinton either. I believe Trump has brought up some important issues that the GOP didn’t care to address. But as of today, I wouldn’t vote for Trump if you put a gun to my head. The vanity and the pettiness of that jackass beggars belief. If he had any sense, he would be on a plane down here trying to help, or at least showing real concern, instead of sitting there with his smartphone, bleating like a baby.

You don’t need to know what I think of Hillary. If you are a conservative, it’s exactly what you think too. But it makes me really angry that this is what the conservative party has to offer America in the fall of 2016: this ridiculous clown. And we have him in part because none of the GOP regulars could make the sale to primary voters.

Till now, I’ve been laughing sardonically at the two repulsive figures American voters have to choose from this November, wondering how it ever could have come to this. This morning, I’m mad about it and disgusted beyond belief.

It’s true. Donald Trump has indeed devoted a number of tweets today to moaning about supposedly biased press coverage of his campaign (while utterly ignoring the fact that he would still be making reality TV were it not for the American news media’s fawning coverage of his every move).

Here he is, moaning about how “unfair” the media are being to him, now that they are actually taking time to fact-check his statements and examine his voluminous past public statements and business dealings: 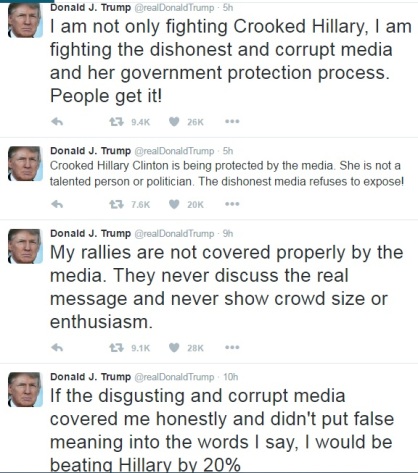 As Dreher acknowledges, Hillary Clinton has not taken the time to comment on the flooding on her Twitter feed either. One thinks back to Hurricane Sandy, falling in the middle of the 2012 presidential election, and marvels at the contrast – though of course we all know that events matter more when they happen to the coasts. But even from an entirely cynical and tactical political perspective, a half competent Republican Party presidential candidate would have taken care to show the people of the affected state (and the nation) that he sees their suffering, and cares about it.

But then the Republican Party does not have a half competent presidential candidate – they have Donald Trump, a man vastly more interested in nursing his petty grievances and rivalries on Twitter than “appearing presidential”, let alone actually being presidential and caring a damn about the suffering of his compatriots.

Dreher is correct too that the GOP is in this ludicrous position “in part because none of the GOP regulars could make the sale to primary voters”. But it is more than that. There is a reason why none of the mainstream Republican candidates were able to find any traction with primary voters – namely the disconnect between their stale old dogmas (ranting about lower taxes, ObamaCare and calling President Obama an un-American threat to national security) and the very real economic pain and political alienation felt by many of their core voters.

Barack Obama may occupy the White House, but Republicans have controlled Congress entirely since 2014. This is a Tea Party Congress, yet Republicans have pointedly failed to deliver the libertarian paradise they promised, mostly because they are every bit as addicted to Big Government as the Democrats. And when you make yourself indistinguishable from the opposition in terms of political outcomes while stoking public hysteria about a Kenyan socialist terrorist trying to destroy America from within, it is little wonder that people scorned the continuity of Jeb Bush or Marco Rubio in favour of Donald Trump’s alternative Republican offering.

Dreher is right too to acknowledge that “Trump has brought up some important issues that the GOP didn’t care to address”. The obvious example is immigration. The duplicity of the Democrats and the American Left in general is staggering: deliberately re-engineering the language to draw no distinction between legal and illegal immigrants, referring to illegal immigrants as being merely “undocumented” – anything the Left can do to excuse and even ennoble lawbreaking is being done.

Some American cities sanctimoniously call themselves “sanctuary cities” – places where honest American citizens who happen to work for the federal government enforcing immigration law are unwelcome while lawbreakers are welcomed with open arms. And too much of the mainstream media is happy to follow along in this subversion of law and language, particularly in the conflation of legal and illegal immigration.

The Republicans are little better, talking a tough talk while being perfectly content to fight the issue to an acrimonious stalemate preserving the status quo. After all, their paymasters are the last people who want to see an end to plentiful cheap labour. Republicans also shame themselves by pretending to their supporters that the millions of illegal immigrants currently living and working in America can be quickly and easily deported with no adverse impact on the local and national economy.

The right thing to do would be for one party to propose a form of one-time amnesty (perhaps allowing those currently living in America illegally to be granted a pathway to official permanent residency while withholding citizenship in recognition of their lawbreaking) while also pledging to get tough on all future lawbreaking, including enhancements to border security and a “one strike and you’re out” rule on visa overstayers and other violators. This would meld the compassion of the Democrat approach with the commitment to law of the Republicans. It would also force more of America’s immigration back through legal routes, forcing the country to have a political debate about how many legal immigrants they wish to allow in every year, and of what skill type.

But neither party will adopt this position. Both choose to childishly demand everything that they want handed to them on a stick, while the reasonable and pragmatic option sails past unheeded. Meanwhile, both Democrats and Republicans get to strut and preen in front of their respective voter bases, acting as though they are the sole custodians of compassion / defenders of the rule of law while making a complete mockery of American hospitality, compassion and the rule of law.

This is why Donald Trump is now a major party presidential candidate – because on issue after issue (immigration is but one example) both parties have chosen to play to their respective supporters, shoring up the base by playing on their fears, rather than daring to lead, educate and step outside of their comfort zone. The Republicans could have prevented the Trump takeover by being the bigger person and making a bold proposition on immigration or trade or any of the other issues where they have been holed beneath the waterline by Trump. But they didn’t. Like a petulant six year old, they wanted to have their cake and eat it – to go on chanting angry mantras about immigration while doing nothing to fix it, and then winning votes based on public anger. And then Trump came along and offered an alternative (if equally bogus solution), and the mainstream Republicans were left with nothing.

And so the Republicans deserve Donald Trump, just like the Democrats deserve Hillary Clinton. But it does not automatically follow that the American people deserve either of them. They deserve a better choice, as this blog has consistently argued. And I think this is what prompts Rod Dreher’s instinct to withdraw from engagement with America’s toxified national politics:

What is my country? Today, to me, it feels like Louisiana. Washington is very far away. Baton Rouge is right here. Nothing against America, you understand, but this hot, wet, miserable piece of ground is where my heart is. I feel that this morning in a way I never quite have. Maybe if I had been here during [Hurricane] Katrina and seen it with my own eyes, I would have come to this realization earlier. But I didn’t. Nevertheless, I’m glad that I did.

The only politics that really matter to me is the politics of this community — that is, the politics of being a good neighbor. Look, I know that politics as statecraft matter. I’m talking about what matters to me. I’d rather be there with the people from the churches and the community, we who are in dry houses today, helping those who have nothing. If that’s the Benedict Option, then I choose it. Donald Trump and Hillary Clinton have nothing to say to me that I care to hear. For me, this is here and this is now. Hillary, Trump and the rest of them are people from TV Land.

This is an important point: what happens when the Donald Trump freak show finally succeeds in driving the remaining good, temperate people out of politics?

The Washington Post published a long piece this weekend exploring the views of millennial voters toward the presidential election. The short version: naked contempt for both parties and candidates, unlike the strong preference for Barack Obama in 2008/2012. They could soon be a generation lost to political apathy for the next few electoral cycles.

Rod Dreher speaks of Hillary Clinton and Donald Trump as though they are alien, disconnected people from “TV Land”, with their own feuds and motivations which are utterly alien to the majority of the country. He’s not wrong. And I think the temptation will be strong, as this tawdry election campaign drags on, for normal people with political inclinations to focus their efforts either on single issues or at the local level rather than on national politics, which has rarely been more hyper-partisan and dysfunctional.

Make politics petty and unpleasant enough, and soon all that will be left are the pettiest and most unpleasant of people. If honourable people feel that they cannot make a positive contribution at the national level without getting sucked into the swirling vortex of email scandals, conspiracy theories and vacuous Twitter feuds then America will soon be led by the people who thrive in that atmosphere.

What an utterly depressing, eminently avoidable state of affairs. 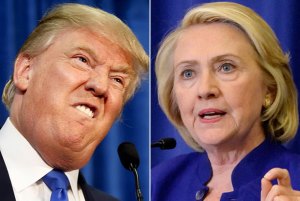