The migrant crisis is too great an opportunity to ignore for many virtue-signalling members of Generation Me, Me, Me

Brendan O’Neill hits the nail on the head with his latest criticism of sanctimonious celebrity campaigners for open borders, in a piece entitled “You’re so vain, you think the refugee crisis is about you”.

Narcissism runs through the discussion. The question these refugees raise is ‘What kind of people do we want to be?’, says one columnist. The keyword here: ‘we’. On the supposedly pro-refugee side, the game of self-reflection has been intense. Witness Allen’s TV-camera tears when she was chatting to an Afghan boy in Calais, after which the entire discussion became about her. Her image was everywhere. There was a thinkpiece war, some saying ‘Allen was right’, others saying ‘Allen was wrong’. It became about the role of celebrities in public life and whether emotionalism has a part to play in political decision-making, with the migrants reduced to mere objects of our self-reflection, and our tears, not the subjects of their own story.

Then there was Stella Creasy, the self-promoting Labour MP, interviewed in the London Evening Standard, promising to stand up for these child migrants regardless of how much flak she will get (shorter version: ‘I am brave’). The piece was accompanied by a massive picture of Creasy: no image of refugees, just her, because this is about her, not them. Then the story became all about Lineker, after he tweeted his concern for the refugees and was blasted by the Sun for doing so. What is the role of BBC people if not to be morally switched-on, a thousand op-ed scribblers asked, because this is about the Beeb, and the media, and us, not them. Jeremy Corbyn got stuck into the discussion of ‘what kind of people we want to be’ by praising Allen and Lineker for showing ‘Britain at its best’. It was a surreal illustration of the evacuation of substance and seriousness from public debate and their replacement by The Spectacle, largely of emotion: a political leader hailing media representations of sorrow for migrants over anything solid or concrete in relation to the actual lives of the actual migrants.

The media discussion has provided a striking insight into what being pro-migration largely means today: that you – the keyword being ‘you’ – are compassionate. Migrants are latched on to, not because of a genuine commitment to the idea of free movement (witness Creasy saying of course some migrants will have to be kept out), but rather as a means of self-distinction. To be pro-migrant is to be superior to those badly informed Others, who have a name now: Brexiteers. This is why so much of the child-refugee discussion has become bound up with Brexit-bashing. ‘What do we see each morning, post-Brexit, when we look in the mirror?’, asked a Guardian columnist of the child-refugee situation (keyword: ‘mirror’). He says we see a nation ‘hollowed out in terms of compassion’, but of course he means that is what ordinary, ugly, Brexit-voting Brits see in the mirror, not the migrant-loving Brits at the Guardian.

To be fair, Brendan also accuses many of the most strident anti-migrant voices of the same sin; I do not want to misrepresent his piece. But then Brendan O’Neill and Spiked (bless them) are enthusiastic advocates for completely open borders and the free movement of people everywhere – “it doesn’t matter if they’re kids, teens or adults: the length of their journey and the strength of their desire to live and work on Britain are surely sufficient to grant them access” – an idea rather ahead of its time (not to mention politically toxic so long as such disparities of wealth, culture and values persist).

But Brendan is absolutely right to note that the people of the Calais Jungle – genuine refugees and economic migrants alike – have largely been become political pawns in the ongoing British immigration debate. What matters to many people is how they are seen to talk about the migrant crisis rather than there being found an effective solution – as we saw only this week when Labour MP Chi Onwurah got upset about a poster mocking leftist credulity about migrants posing as refugees, claiming that it was “offensive” when it in no way targeted genuine child refugees.

O’Neill also writes perceptively of the “moral thrill” experienced by many of the “let them all in” camp, and indeed you see it coursing through numerous posts on social media, the intent of many seems far more to do with aggrandising the poster than trying to reach a reasonable compromise with those who do not want to let every last person into Britain unquestioningly.

But to his criticism of the political right:

The narcissism of the other side is striking, too. It is hard to believe that these right-leaning observers really believe that 70 young people coming to Britain will have any kind of terrible impact. And yet they demand that the arrivals’ teeth be checked to see how old they are, and furiously tweet photos of the young men with adolescent moustaches and mobile phones as if to say: ‘See! They’re grown-up! They’re dangerous!’ This is a performance of toughness, of security, to match the performance of compassion of the other side. Just as the pro-refugee side sidelines serious debate about freedom of movement and the role of their beloved EU and its Fortress Europe in creating this crisis, so the anti-refugee side dodges difficult questions of what is really causing a sense of insecurity in 21st-century Europe in favour of turning a handful of young refugees into symbols of existential disarray. Indicators, symbols, mirrors – that’s all these people are, to both sides.

I don’t see it that way at all. While some people do demand that Britain stop accepting any further refugees, a majority would be happy, I believe, if the UK government was simply a little less credulous and a bit more discerning about the people we do accept – both as to their age and the validity of their status as refugees rather than economic migrants.

The pictures do not lie – many of those already brought to Britain from the dismantled Calais Jungle camp are clearly adults. Does that automatically mean that they are not deserving of help? No, and I don’t think that anybody serious has claimed otherwise. But if this country is accepting fully grown men who claim to be children, what is to say that other levels of scrutiny which are supposedly taking place – like checking that entrants are not violent jihadists – are any more reliable? If the UK government is squeamish about insisting that child refugee applicants submit to dental tests to verify their age, have they also been reticent to ask whether the people they are ferrying from Calais to Croydon intend to wage jihad from inside their adoptive country? The incompetence we have already seen rightly makes us wonder about the incompetence which is being kept hidden from us.

These are perfectly legitimate questions to ask, and they do not constitute virtue signalling in the same way that the Left have seized on the migrant crisis to portray themselves as saints and the rest of us as sinners. Particularly in the context of the recent bloody history of ISIS using the migration crisis as a cover to slip Islamist extremists into Western countries, a basic level of scrutiny should be one of the first duties of government – yet there is now legitimate cause to fear that this scrutiny is not being applied for fear of causing “offence”, either to the migrants themselves or (more likely) to their powerful left-wing cheerleaders.

And here’s the thing.

Far right-wing rhetoric may be much more unpleasant to the ear than trendy lefty dronings about a borderless world of people holding hands beneath a rainbow. But leftist rhetoric and actions when it comes to the migrant crisis have killed far more people than anything said or done by those who are sceptical of accepting every last economic migrant who fancies a new life in Britain.

It was the leftist cheerleaders of Angela Merkel’s “open doors” policy who encouraged thousands more people to make the treacherous journey across Europe, some in genuine fear of imminent harm but many simply seeking a better life.

It was the leftist campaigners who accused sceptics of heartlessness for wanting to start turning boats back as a disincentive to make perilous the sea voyage who tacitly encouraged many more people to do so, and drown in the process.

And it was the false hope given by leftist agitators that Britain would ultimately accept a trumped-up moral obligation to accept thousands of people already enjoying the protection of France, hardly the most dangerous country in the world, which encouraged even more people to flock to the Jungle and remain there.

And yet we are supposed to believe that open borders zealots and sceptics are equally at fault when it comes to virtue signalling about the migrant crisis? Absolutely not. Exploiting migrants and refugees to burnish their own compassion credentials is the Left’s bread and butter, and it is an emotional comfort blanket whose cost can be measured in human lives.

So let’s not pretend that there is any moral equivalency in terms of blame for the suffering of migrants holed up in Calais. There is none. This is a crisis manufactured by the Left and encouraged by the Left for the benefit of the Left. They own it.

And all of Lily Allen’s tears will not wash away their culpability. 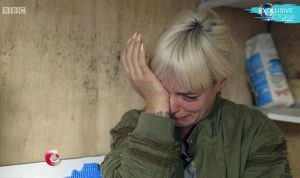