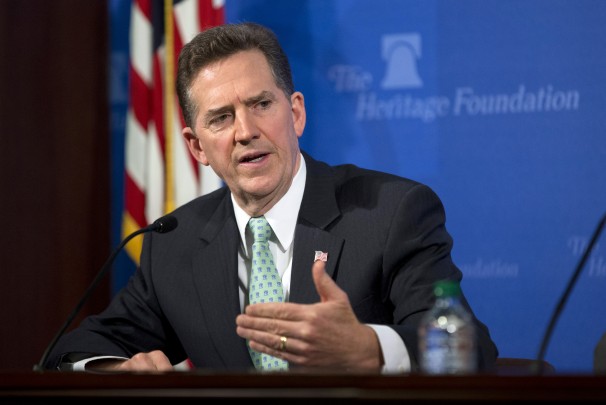 A bold warning against supranationalism

This blog has rarely found common cause with former Senator for South Carolina Jim DeMint, but his OpEd in CapX (written with Nile Gardiner) is a welcome expression of solidarity with the Brexit cause.

The contrast could not have been starker – between a message of genuine optimism on the Brexit side, and the language of gloom and doom emanating from the Remain camp. It was frankly sad to witness an intensely negative campaign by those who suggest that Britain will not benefit from being a free and independent nation.

It is unthinkable that Americans would ever subject themselves to the kind of suffocating supranationalism that exists within the EU, with nation states surrendering large amounts of their sovereignty to unelected bureaucrats in a distant capital, with their courts overruled by foreign judges. It is all the more disturbing therefore that the leader of the free world, the president of the United States, has chosen to warn our British friends against leaving the EU.

This very much echoes the sentiments of this blog – the United States branches of government would not for one second tolerate the kind of subjugation to a supranational entity and curtailments on sovereignty that are required of EU member states – therefore, Barack Obama’s intervention in the EU referendum debate was very much a case of “do as I say, not as I do”.

Moving on to security, they point out:

Ignore the childish scaremongering coming from the White House. If the British people decide to leave the EU, their national security will be enhanced, not least because Britain can retake full control of its own borders. And the NATO alliance would actually be strengthened, rather than weakened, if Britain left the EU. The European Commission’s drive to create a European Union Army would draw vital resources away from NATO, and lead to duplication of key military assets in Europe. It is NATO, not the EU, that has secured peace in Europe in the post-World War Two era.

A British exit from the EU would be good for Britain, Europe, and the United States. A United Kingdom that is not shackled to a declining EU that is mired in a culture of big government, soaring public debt and welfare dependency, would be a better partner for the US. A resurgent, self-confident Britain that looks outward to the world instead of inward, that is free to shape its own destiny, decide its own laws, craft its own foreign and security policies, and negotiate its own trade deals, can only strengthen the Anglo-American Special Relationship. A Great Britain that has absolute control of its own borders will also be a stronger partner in the fight against ISIS and Islamist terrorism.

Our former Heritage Patron, Margaret Thatcher, loved the United States and cherished the bonds that tie our two great nations together. She condemned the European Project, the idea of a European superstate, as “perhaps the greatest folly of the modern era.” The Iron Lady was absolutely right about the dangers of ever-closer union and rampant supranationalism in Europe, and how it threatened both Britain and the transatlantic alliance. We owe a huge debt of gratitude to Lady Thatcher’s leadership on the world stage. Her warnings against a federal Europe have come true. Today, Great Britain has an opportunity to be a free country once again. If the British people seize the day and break free of the EU, this should be a cause for celebration and rejoicing on both sides of the Atlantic.

Jim DeMint and Nile Gardiner are quite right to warn about “rampant supranationalism”. A point which has rarely been made in the EU referendum debate is the fact that no other countries in the world have rushed to replicate the EU model. One might point to the African Union and its Pan-African Parliament, but the two institutions are hardly comparable – the second objective of the African Union is “to defend the sovereignty, territorial integrity and independence of its Member States”, a goal to which the EU most certainly does not subscribe, in theory or in practice.

Look elsewhere in the developed world, to Asia, Australia and the Americas, and there is no desire whatsoever to form a political union based on the supranational form of government, in which a new pan-national entity takes on more and more of the traditional roles of the nation state. This should tell us something – and yet the EU persists with the steady, stealthy implementation of its mid 20th century blueprint even as globalisation and the emerging global regulatory system makes it increasingly irrelevant, a clumsy middleman rather than an effective defence.

And at a time when too many voices from the United States – the one country which should truly understand the desire for independent self government – have been fearfully urging Britain to stay in the EU, it is good to hear some bold conservative voices supporting Brexit.