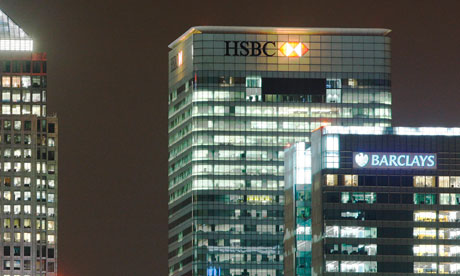 Much is being made of HSBC’s statement that the UK-based bank is considering moving their headquarters away from London, with senior Labour politicians quick to take this corporate bellyaching as vindication of their plan to deny the British people any say in their democratic future.

From the report in the Guardian:

HSBC, Britain’s biggest bank, has issued a stark warning about the economic risks of the UK pulling out of the European Union as it revealed it was considering moving its headquarters out of London.

The surprise announcement of a full-blown review into where the bank should base its operations will stun politicians on the general election campaign trail.

HSBC listed the economic uncertainty created by the risk of the UK going alone – a blow to the Conservatives which have pledged to hold an “in-out” referendum on the EU.

Its shares jumped almost 4% after the statement, which was released before the bank’s annual shareholder meeting in London. The rise added more than £4bn to the value of HSBC – already one of the most valuable companies on the London stock market.

Among the Labour politicians to jump on the announcement was the shadow Business Secretary, Chuka Umunna, who wasted no time in fashioning HSBC’s announcement into a weapon with which to bash the Tories.

In a series of tweets, Umunna claimed that it is “irresponsible” for the British people to have a debate about whether we wish to become a sovereign country again, and that it would be a “disaster” for the economy if Brexit (British secession from the EU) were to happen:

END_OF_DOCUMENT_TOKEN_TO_BE_REPLACED

After Margaret Hodge MP humiliated HSBC’s top brass in a Public Accounts Committee hearing, some politicians and commentators would rather close ranks in defence of the establishment than support those who hold the powerful to account.

By at least one count, Margaret Hodge‘s tenure as chair of Parliament’s Public Accounts Committee has been a complete failure.

Back in 2011, in a speech to the Institute for Government, the MP for Barking outlined her vision of how the committee should conduct its business as Britain entered the age of austerity under the Conservative-LibDem coalition government. Among her priorities at that time – a less confrontational approach to witnesses:

In her speech (approximately 10 minutes into the above video), Margaret Hodge said: