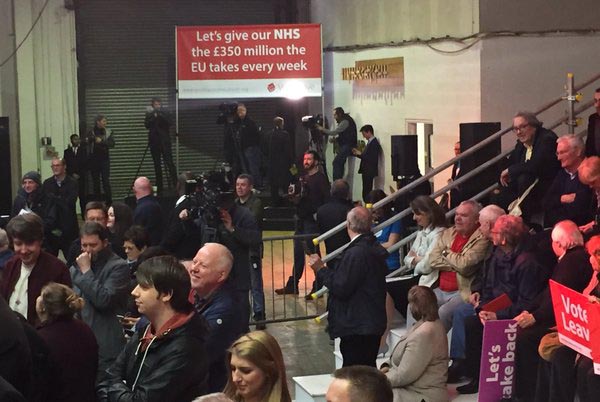 The Remain campaign are going to tell lots of apocalyptic, scaremongering and false tales about how leaving the European Union would destroy the NHS. But that does not mean that Brexit campaigners should stoop to their level

Vote Leave are going all-in with their risible, childish lies about saving £350 million a week in the event of Brexit, and offering the money as a sacrifice to Our Blessed NHS instead.

This is – to use the nicest words possible – completely amateurish and stupid.

Conservatives – especially real ones who aren’t all that keen on the state being a monopolistic provider of healthcare – don’t make very plausible knights in shining armour when it comes to defending the NHS, especially in the minds of voters conditioned by years of hand-wringing left-wing rhetoric that the Evil Tories are perpetually one step away from turning poor people away from hospital.

Besides, the high figure of £350 million fails the common sense test even for the lowest of low information voters. The risible suggestion will do nothing to persuade those who already mindlessly worship the NHS like some kind of secular new age religion and fear that Brexit will hurt their idol, while it offends the more intelligent voter by treating them as though they are stupid.

Richard North, much like this blog, is not having it any more:

What is unlikely to impress, to any one who has the first idea of the issues, is the sort of slogan shown above – the £350 million claim. Vote Leave know it isn’t true. That makes it a lie. Why they go ahead with a deliberate lie, I don’t know. They must think there is some advantage to it.

I find the lie offensive. But then the other side is lying as well. I also find that offensive, but it doesn’t worry me. In fact, I welcome it – it shows weakness, reduces their credibility and gives us leverage. It does worry me when our own side lies – for exactly the same reasons: it shows weakness, reduces our credibility and it gives the other side leverage.

Throughout my campaigning career, I’ve made a point of seeking accuracy – as best I can. For the very opposite reasons that the lie is a bad idea. It shows strength, it increases our credibility and it denies the other side leverage.

In other words, accuracy is the embodiment of good campaigning. The lie is the opposite. That matters. We don’t. We need people to grow up and realise that. There is far too much at stake for us to be playing these silly games.

For libertarians and conservatarians, one of the most depressing aspects of nearly all the Leave campaigns is the idea that any money saved through Brexit (and the sums we are talking are likely to be so small in either direction as to be insignificant) should not be handed back to the taxpayer in the form of tax cuts, but merely re-allocated to some other area of the state which is crying out for more funding.

Apparently there is precisely zero demand in this country for a campaign, or politicians, who dare to suggest that we should aim to reduce government expenditure in one area not to free up cash for another, but rather to return the money to the people who earned it and who create value in the first place. Therefore it is unsurprising that the NHS proved too shiny and appealing a target for the dilettantes at Vote Leave to resist. They know we worship the NHS uncritically, and so they think that we will be highly susceptible to any messages which link Brexit with the idea of helping the NHS.

Unfortunately, they also lack the intelligence to realise that making this campaign about our socialised healthcare system means fighting the EU referendum campaign on ground which is uniquely favourable to the mostly Remain-supporting Left. And there is simply no way that a Brexit campaign supported mostly by those on the Right wins a “Who Loves The NHS Most?” contest against the arrayed forces of the Labour Party and every virtue-signalling keyboard warrior in the country.

As this blog recently pointed out:

Whether we vote to leave the European Union or remain in the burning building, the NHS will continue to exist. We can’t seem to shake it. And it will continue to churn out moderately priced but increasingly substandard levels of care while nearly the entire population gathers round to uncritically praise the holy creation of St. Aneurin Bevan of Tredegar from dawn to dusk. Nothing, absolutely nothing, will change.

Do you really believe Britain Stronger in Europe when they suggest that “medical innovation” will cease or be harmed if Britain leaves the political construct known as the European Union? Exactly what is it about forsaking a foreign flag, anthem and parliament which will slow down the cure for Alzheimer’s?

Or do you seriously buy this idea that Brexit means that we can throw up a brand new hospital in every major British city within a year, and keep on doing that until the NHS is not only our largest employer but our only employer?

Don’t be taken in by this execrable, manipulative, transparently idiotic nonsense from the major Leave and Remain campaigns, all of which seem to be managed by B-student politicos and all of which are operating on the hopeful assumption that you are a frightened, credulous simpleton.

In order to have a shot at winning the referendum on 23 June, Brexit supporters must stop getting sidetracked by glitzy distractions like promising to funnel non-existent money towards the NHS, and focus instead on neutralising many voters’ fear of the potential economic impact of Brexit.

As Dr. North correctly points out:

The least important people in the referendum campaign are those of us who have already made up their minds which way they are going to vote, and will not change their minds under any circumstances.

The EU is by no means beloved. If the Brexit campaign could only negate all of the mostly baseless economic fears surrounding Brexit, they would win the referendum by a landslide. But to do so means communicating a Brexit plan which clearly de-risks the process and shows people that it is quite possible to leave the political construct known as the European Union while still participating fully in regional and global trade.

Every day that those with the biggest platforms and media profiles waste their time making implausible and unconvincing promises about the NHS – hostile ground where the fighting is hugely favourable to the pro-EU Left – is a day which is not spent promoting a clear Brexit plan and neutralising the one issue (economic concerns) which is preventing this decision from being a landslide 65-35 in favour of leaving the EU.

In other words, fighting this referendum with Vote Leave hogging the limelight on the Brexit side is like – well, Geoffrey Howe (of all people) said it best in his 1990 resignation speech in the House of Commons:

It is rather like sending your opening batsmen to the crease only for them to find, the moment the first balls are bowled, that their bats have been broken before the game by the team captain.

With a captain like Boris Johnson and the hotshots at Vote Leave, all bizarrely exhorting us to leave the European Union in order to Save Our NHS, who needs a Remain campaign anyway?

More on the attempts by both sides to weaponise the NHS for the coming EU referendum here and here.