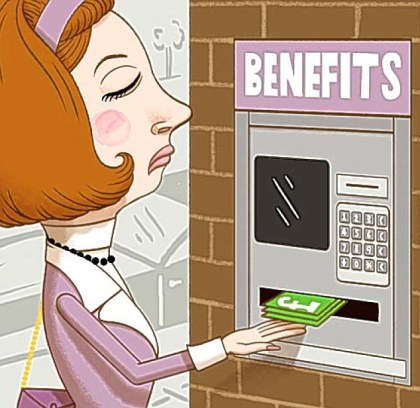 Are we all in this together, as George Osborne insists, or are we not?

The Labour Party and their sympathisers in the media have been asking this question non-stop since the coalition government came to power in 2010, shrieking with outrage every time a new policy was announced which failed to forcibly grab enough from the rich and scatter the proceeds over the heads of the deserving poor. And throughout this time we have been treated to some wildly over-the-top rhetoric and mischaracterisations, such as Polly Toynbee’s insistence that “people feel in their pockets … that the middle and lower half are deliberately made to pay the price, while Osborne gifts the richest the most.”

(How could it be otherwise, one might well ask. Labour spent thirteen years in government making even middle-class families reliant on benefits, tax credits and public services, so there was no way that government spending could then be cut in times of austerity without causing more pain and human suffering than should otherwise have been the case. And yet still we look wistfully at Gordon Brown as he saunters off into the sunset, and glare sullenly at David Cameron and George Osborne as they deal with Brown’s toxic legacy).

We may still be stumbling out of the crater left by the Great Recession and the dubious economic recovery, but that doesn’t mean that every tax rise or spending decision has to be, or even can be, progressive. To behave in such a way would be foolish – we would end up in a situation where we forcibly “spread the wealth around” in good times because there is more cash to be expropriated from the successful in an economic boom, and then spread the wealth around some more in lean times because that’s the “compassionate” thing to do. Meanwhile, we would have created such a universal disincentive to work hard, invest and succeed that anyone with wealth to expropriate will have dialled back their efforts or fled the country altogether.