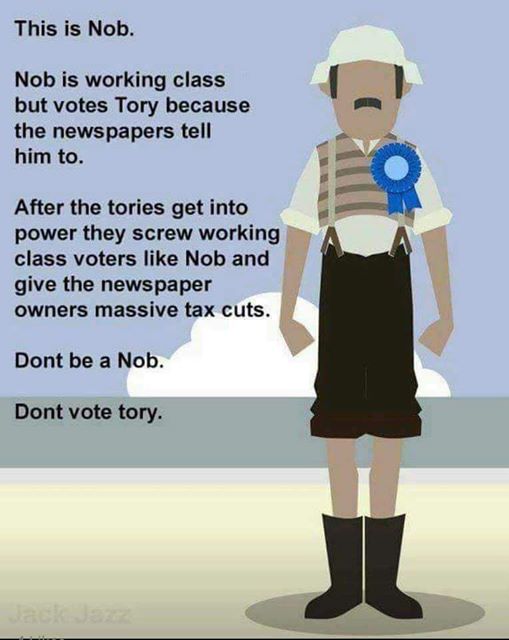 How can the British Left appeal to working class voters turned off by socialist paternalism and attracted by conservative messages of patriotism, freedom and self-sufficiency? Maybe a really sanctimonious internet meme will do the trick.

This internet meme – currently being widely circulated on Facebook and other social media by self-satisfied young lefties who think that twenty minutes spent reading HuffPost on the tube every day makes them a political guru – really does have it all.

First it has the crude pictorial stereotype of a “typical working class person” (but actually something far more akin to a Monty Python character), standing there in his workman’s garb all ready for an honest day’s labour ploughing the fields, making widgets in a factory or going down the mines – you know, the kind of jobs that people who work for creative agencies in Shoreditch think that people in Harlow or Stoke perform when they are not claiming their much-deserved benefits.

Then we have the arrogant, sanctimonious assertion that the poor fellow votes Tory only because the “newspapers tell him to”. This, of course, is in direct contrast to the enlightened sharers of the meme, who are naturally very highly intelligent, quizzical yet cynical souls who patiently weigh up every data source and review every policy position, judging every argument based on its merits before miraculously finding themselves in total agreement with whatever the Guardian, the Huffington Post or so-called comedian Marcus Brigstock happens to be telling them.

Next, we get the assertion that the Evil Tor-ees “screw working class voters” once they get into government, simply because they dare to treat the British public like autonomous human beings who might prefer it if the government got out of their way and treated them like capable adults rather than perpetual lifelong victims to be coddled and cared for by the state from cradle to grave.

And finally, of course, we get the culmination of the hilarious “word play” by which such working class voters who dare to shun their rightful masters and defenders (the parties of the Left) are labelled “Nobs”.

Honestly, it is hard to believe how a meme like this could possibly fail to deliver 100 percent of the working class vote to Jeremy Corbyn’s harmonious and very in-touch Labour Party, Tim Farron’s pinch-faced “Citizen of the World” LibDems, Caroline Lucas’s human progress-hating Greens and Nicola Sturgeon’s authoritarian, incompetent SNP.

But just for some fun, below is a more honest version of the meme, describing the kind of person who proudly shares it on their Facebook timeline – presumably in the hope of persuading the kind of working class person whose intellect they scorn, whose political viewpoints they despise and whose company they would never keep in a million years:

This is Pretentious, Virtue-Signalling Douchewad. Douchewad shares glib and overwrought anti-conservative memes on social media because their unquestioning discipleship of the Guardian and HuffPost has convinced them that anybody from the “working class” who doesn’t buy into the Left’s collectivist, non-contributory welfare supporting, NHS-worshipping, success-punishing agenda must have been brainwashed by the Evil Murdoch Press into voting against their own interests for the Evil Tor-ees.

It never occurs to Douchewad that said working classes might value self-sufficiency, personal resilience and individual opportunity (with a welfare state that acts as a safety net rather than a comfort blanket) over the chance to be the lifelong, helpless and perpetually dependent sympathy project for some Social Studies or PPE-educated leftist who prances around acting like the champion of the striving classes right up until until such people dare to offer political opinions of their own (cough, Brexit).

Actually, go for it. Be a Douchewad. Vote Labour, Green, SNP or LibDem while broadcasting to the world about what an enlightened, compassionate, woke person you are, unlike those monstrous Tories. At this point you are literally doing Theresa May’s job for her. 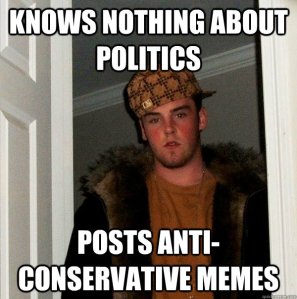