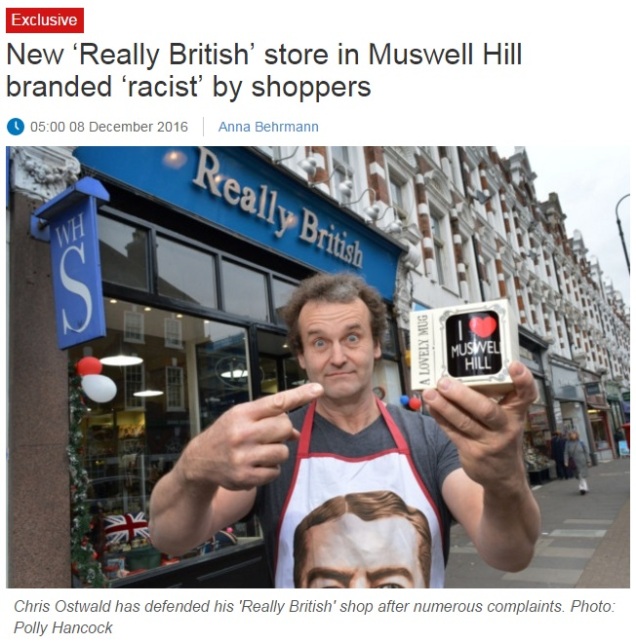 Another day, another painful reminder that London voted strongly against Brexit and is, in many ways, a different country within a country.

A shopkeeper has defended his novelty gift shop after it has been boycotted by shoppers who branded it ‘pro-Brexit’ and ‘racist’.

The shop in Muswell Hill caused a storm on social media with owner Chris Ostwald, 54, forced to remove his British flags on the opening day on November 26 because he received so many complaints.

One of the shop assistants, who is Spanish, left after just one day because of all the snide remarks she received.

The shop sells British-themed gifts and homeware. Their products include condiments, such as brown sauce, London underground tea towels and “Muswell Hillbillies” mugs, which references the Kinks album. There are also suffragette aprons and stocking fillers such as old fashioned compasses.

Mr Otswald, 54, told the Ham&High: “The shop is in no way meant to be ‘political’ or ‘pro Brexit’, but we have had a lot of complaints saying it is or we are ‘racist!”

Mr Ostwald added: “People have been coming in and just tutting and walking out.”

There have been other comments on Facebook, with one person arguing that the name is not inclusive.

One man wrote on public Facebook group Muswell Hill and Friends: “Chris, while I applaud you setting up a business in Muswell Hill and employing local people I’m curious as to why you decided to call your shop ‘Really British’ (besides the obvious point that you will sell British made goods)?

“Like many people I live in London because of its international nature, and for me personally having a big sign on the Broadway saying ‘Really British’ makes me feel you’re implying that other local businesses in the area are therefore somehow ‘not really British’.

“Some will no doubt say I’m over-sensitive but I can’t help thinking that given the recent divisive referendum and the current political climate you might have chosen a more inclusive name in 2016.”

This invidious disease of proud anti-patriotism is particularly British. In America, whether you are on New York’s Fifth Avenue or Main Street in some small Mid-Western town, a shop which celebrates Americana and American heritage would be celebrated and universally popular. In France, shops which sell traditional French produce and goods are happily frequented by tourists and locals alike.

Only in Britain are we cursed with a sub-population of pinch-faced killjoys who have been bred to believe that any expression of pride in Britain is “scary” and somehow tantamount to racism. Only in the fashionable and gentrifying parts of London and Britain’s other major cities does one find this pitiful tribe of people who are allergic to their own flag.

Only in places like London’s Muswell Hill do people hold the country which gives them life and liberty in such horrified, sneering contempt.