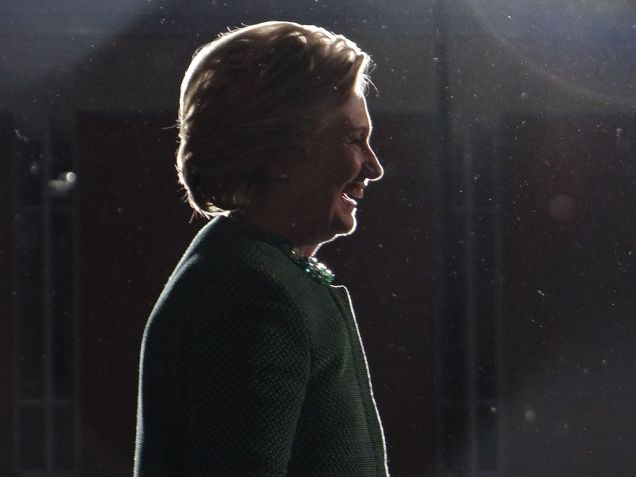 Conservatives who feel forced to vote for Hillary Clinton are not “With Her”. They are putting country before party, and ahead of their own political preferences

I don’t always agree with David Frum, but his latest piece in The Atlantic, advancing the conservative case for choosing Hillary Clinton over Donald Trump in this most depressing of presidential elections, is well worth a read.

Frum is under no illusions that a Clinton presidency will do anything to promote or further conservative ideals. He is wide eyed in his acknowledgement of Clinton’s character flaws and ethical shortcomings. But he recognises that by voting for Hillary Clinton in 2016, we stand the best chance of ensuring that the Republic does not become immeasurably worse off before conservatives have an opportunity to regain the White House in 2020. In other words, he believes that Clinton will do little good, but Trump could do existential harm.

Frum’s conclusion is worth quoting at length:

I have no illusions about Hillary Clinton. I expect policies that will seem to me at best counter-productive, at worst actively harmful. America needs more private-market competition in healthcare, not less; lighter regulation of enterprise, not heavier; reduced immigration, not expanded; lower taxes, not higher. On almost every domestic issue, I stand on one side; she stands on the other. I do not imagine that she will meet me, or those who think like me, anywhere within a country mile of half-way.

But she is a patriot. She will uphold the sovereignty and independence of the United States. She will defend allies. She will execute the laws with reasonable impartiality. She may bend some rules for her own and her supporters’ advantage. She will not outright defy legality altogether. Above all, she can govern herself; the first indispensable qualification for governing others.

So I will vote for the candidate who rejects my preferences and offends my opinions. (In fact, I already have voted for her.) Previous generations accepted infinitely heavier sacrifices and more dangerous duties to defend democracy. I’ll miss the tax cut I’d get from united Republican government. But there will be other elections, other chances to vote for what I regard as more sensible policies. My party will recover to counter her agenda in Congress, moderate her nominations to the courts, and defeat her bid for re-election in 2020. I look forward to supporting Republican recovery and renewal.

This November, however, I am voting not to advance my wish-list on taxes, entitlements, regulation, and judicial appointments. I am voting to defend Americans’ profoundest shared commitment: a commitment to norms and rules that today protect my rights under a president I don’t favor, and that will tomorrow do the same service for you.

Vote the wrong way in November, and those norms and rules will shudder and shake in a way unequaled since the Union won the Civil War.

I appreciate that Donald Trump is too slovenly and incompetent to qualify as a true dictator. This country is not so broken as to allow a President Trump to arrest opponents or silence the media. Trump is a man without political ideas. Trump’s main interest has been and will continue to be self-enrichment by any means, no matter how crooked. His next interest after that is never to be criticized by anybody for any reason, no matter how justified—maybe most especially when justified. Yet Trump does not need to achieve a dictatorship to subvert democracy. This is the age of “illiberal democracy,” as Fareed Zakaria calls it, and across the world we’ve seen formally elected leaders corrode democratic systems from within. Surely the American system of government is more robust than the Turkish or Hungarian or Polish or Malaysian or Italian systems. But that is not automatically true. It is true because of the active vigilance of freedom-loving citizens who put country first, party second. Not in many decades has that vigilance been required as it is required now.

Your hand may hesitate to put a mark beside the name, Hillary Clinton. You’re not doing it for her. The vote you cast is for the republic and the Constitution.

That is precisely where I find myself (though not quite yet a US citizen, so spared from the pain of having to personally make that call – roll on 2020). I don’t believe that Hillary Clinton stands for any real, fixed political values and I have grave concerns about aspects of her judgement and ethical compass – and so did many Democrats, until the DNC furtively helped to push Clinton over the line in her unnecessarily tough primary battle.

But these concerns pale in comparison to the danger presented by Donald Trump, whose supposed miraculous Damascene conversion to conservatism I do not believe for one moment, whose appalling personal behaviour is the subject of hard evidence rather than partly-conspiratorial conjecture (as it is with Clinton) and whose temperament makes him the absolute worst person to assume the role of Commander in Chief and Chief National Voodoo Doll, a focus for the endless complaints of an entire nation.

Like him or not, Barack Obama has served his terms of office with grace and dignity, even when under withering personal attack. This will not be so under Trump. As comedian Louis CK said in his endorsement of Clinton on the Conan O’Brien show, when Donald Trump is personally attacked everything stops so that Trump can punch back. That is simply not a luxury which the President can afford.

The lesson Trump has taught is not only that certain Republican dogmas have passed out of date, but that American democracy itself is much more vulnerable than anyone would have believed only 24 months ago. Incredibly, a country that—through wars and depression—so magnificently resisted the authoritarian temptations of the mid-20th century has half-yielded to a more farcical version of that same threat without any of the same excuse. The hungry and houseless Americans of the Great Depression sustained a constitutional republic. How shameful that the Americans of today—so vastly better off in so many ways, despite their undoubted problems—have done so much less well.

How true this is. Now, this blog has every sympathy for many of Donald Trump’s supporters, who feel utterly let down by an American political class which has alternately pandered to them before betraying them, ignored them or held them in open contempt. And while this blog is very much pro free trade and managed immigration, the fact that Americans have not even had a choice when it comes to these issues based on the position of the two main parties is sufficient reason alone for the rise of a populist like Trump, albeit not necessarily a candidate with Donald Trump’s gargantuan personal flaws.

So yes, things are bad, and yes, the political class has not been responsive. But America managed to survive world war and economic depression in the twentieth century without coming this close to electing a dangerous authoritarian. Whatever afflictions the struggling “left behind” class said to make up much of Trump’s support may now be experiencing is nothing compared to the suffering of, say, the Dust Bowl. To react to these present circumstances by reaching for Donald Trump when their ancestors typically bore their tribulations far more stoically is in some way a reflection of American moral decline, which is very worrying indeed.

This blog would have loved to have seen a radical right-wing candidate willing to question failing old mantras about immigration and trade deals and other issues. I may be a #NeverTrump person, but I acknowledge that Trump often raises valid problems which have received scant attention from other politicians. The only miracle is that Trump manages to betray those causes by somehow managing to be an even more imperfect vehicle for his policies than Hillary Clinton is for hers.

There is no sugar-coating that the next four years are going to be depressing and barren of achievements for American conservatives. But as Frum rightly points out, sometimes there are more important things than getting one’s own way in a traditional left-right political dispute. Sometimes the cost of letting the nation drift a little further to the left is less than the cost of handing it over to somebody as unstable as Donald Trump.

After all, Republicans screamed for eight years that President Obama would turn America into a socialist hellhole and usher in the end of the Republic, and it didn’t happen. Hillary Clinton is no more left-wing than Obama, though a cannier and more ruthless political operator, but if America didn’t turn into North Korea on Obama’s watch it is unlikely to do so in four years of a Hillary Clinton presidency.

The people who will vote for Donald Trump on November 8th deserve to have their political views represented by someone better than the thin-skinned egomaniac who gets into Twitter wars with D-list celebrities in the early hours of the morning. Even if one agreed with all of Trump’s policies – many of which are actually profoundly un-conservative and much closer to being nakedly authoritarian – that would be no excuse for electing a man with such huge and concerning personality flaws.

David Frum did the right thing. This most eye-catching of elections has been the most depressing presidential campaign in my lifetime, but at least if Clinton wins we will have a shot at making 2020’s campaign a bit more inspiring, substantive, policy-based and (hopefully) less existentially threatening.

4 thoughts on “Reluctant Conservatives For Hillary”