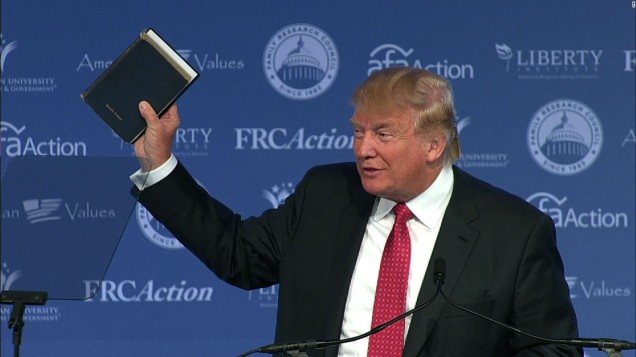 If you seriously believe that Donald Trump understands the Christian faith, has read the Bible or would choose the defence of religious values and freedom over some other passing whim while serving as president, then I have a bridge across the River Thames to sell you

Eric Zorn has a great column in the Chicago Tribune in which he systematically takes apart Donald Trump’s pretence that he is a Serious Christian and the default choice for those voting with their Christian faith foremost in their minds.

Nothing illustrates what a flim-flam man Donald Trump is better than his frequent and oily allusions to the Bible.

It is his favorite book, he tells the credulous masses at his rallies. Nobody reads it more than he does.

But a review of the record suggests he may not have read it at all.

During a televised interview with John Heilemann and Mark Halperin of Bloomberg Politics in August 2015, Halperin noted Trump’s frequent professions of fondness for Judeo-Christian scripture and said, “I’m wondering what one or two of your most favorite Bible verses are and why.”

That unfamiliarity showed up again in April when host Bob Lonsberry of WHAM-AM in Rochester, N.Y., broached the subject in a phone interview: “Is there a favorite Bible verse or Bible story that has informed your thinking or your character through life, sir?”

“Well, I think many,” answered the would-be exegete-in-chief. “I mean, you know, when we get into the Bible, I think many, so many. And I tell people, look, ‘An eye for an eye,’ you can almost say that.”

But not only is “An eye for an eye, a tooth for a tooth” an Old Testament verse that condones barbaric vengeance (“… hand for hand, foot for foot,” it goes on, “burn for burn, wound for wound, bruise for bruise”) it was also expressly repudiated by Jesus in the Sermon on the Mount: “You have heard that it was said, ‘Eye for eye, and tooth for tooth.’ But I tell you, do not resist an evil person. If anyone slaps you on the right cheek, turn to them the other cheek also” (Matthew 5:38-39).

I get it. Actually making time to sit down and read the Bible every day while trying to internalise parts of it is tough. Particularly, I imagine, when you are rich and famous and your free time is largely given over to grabbing women “by the pussy”. Personally, I have only read the entire Bible cover-to-cover once, when I was eighteen and preparing for my adult confirmation into the Roman Catholic church after converting from Anglicanism. More than a decade later I am now finally trying to do so again, with the help of a great online Bible app which comes with a manageable “Bible in a year” reading plan.

The point of which being that it is fairly easy to spot someone who has actually attempted the feat and possesses a genuine (if still somewhat patchy, like mine) familiarity with the Bible, and somebody who is just putting on an act, attempting to fake religious observance as a kind of cultural marker. And Trump clearly falls into the latter category.

No, but he’s the worst at it — the most transparent — that we’ve ever seen on the national stage.

It’s not just that he’s a brazen Bible huckster, it’s that he’s really bad at it.

Those who put their faith in him should prepare to have it shattered.

This is depressing for all those Christians who have been taken in by Donald Trump’s false displays of piety, as well as those resigned Christians who recognise that Trump is a charlatan but feel that Trump represents a better bulwark against attacks on their values and way of life than Hillary Clinton.

But it is also darkly amusing. Because for eight years it has been the habit of more than a few Republican Party politicians to insinuate that President Barack Obama is somehow not a Christian, or even that he is a closet Muslim, despite endless evidence of the Obama family attending church and Obama himself being capable of speaking about his faith without getting completely tongue-tied or reporting to bland banalities. Some Republicans stood up to the “Obama is a Muslim” hysteria – notably John McCain at a town hall meeting during the 2008 presidential campaign. But many others remained cynically silent, allowing prejudice and misinformation to take hold, thinking that it would advantage them politically.

And now it is the GOP’s turn to field a presidential candidate who doesn’t merely “exaggerate his piety” but effectively invents it from thin air to get himself out of a tight spot in a TV interview. Of course, the Democrats are in absolutely no position to take advantage of this fact – Hillary Clinton is a Christian, like Obama, but has chosen to downplay her faith in this election because many of her supporters place more faith in the god of Social Justice and Identity Politics than the God of the Old and New Testaments.

As Ben Wolfgang notes in the Washington Times:

Hillary Clinton’s Christianity, which she wielded as a political weapon in her 2008 Democratic presidential primary campaign, largely has been missing in this year’s election.

She hasn’t hidden her Methodist upbringing, but scholars say it’s not front and center. And where in the past she used it as a window into her character, this year she’s deployed it as a debate tactic to push criminal justice reform and other policy goals.

Church attendance also has been all but absent from Mrs. Clinton’s schedule, except when she’s turned up behind a pulpit to stump for votes, particularly in predominantly black churches, where her appearances focus largely on how she intends to work with religious leaders to accomplish shared political objectives.

Since 2008 she’s also abandoned traditional Christian positions on issues such as same-sex marriage, coming in favor of the practice in 2013 after years of opposing it.

The reason for the shift, analysts say, is twofold. Mrs. Clinton is taking on an opponent, Republican Donald Trump, who is seen as one of the most nonreligious presidential candidates in modern history. Pew polling from earlier this year found that just 30 percent of American voters say they consider Mr. Trump religious, while 48 percent said the same about Mrs. Clinton.

Perhaps more importantly, she now leads a party that, among its white base, if not its core black and Hispanic members, has become an increasingly secular institution. Recent polling shows the Democratic Party includes in its ranks nearly four times as many atheists and agnostics as the GOP.

Ultimately, the “Donald Trump is a better Christian than Hillary Clinton” argument comes to the two candidates’ respective positions on abortion. And if abortion is a deal-breaker for you then yes, Trump’s currently stated position on abortion (which has certainly changed since his liberal days of a few years back, as well as during this campaign, both without satisfactory explanation) is more in line with Church teaching about the sanctity of life.

But as with all of Donald Trump’s other stated policy positions, there is absolutely nothing to give confidence that his current position either represents his true beliefs on the subject, or that he would not flip-flop on the issue without a second thought if he saw political value in doing so.

Christians – particularly Evangelicals – should really be used by now to cynical Republican politicians who have trained themselves to speak the language, say the right things and push all the right buttons on social issues in pursuit of the evangelical vote, only to sell out the movement once safely ensconced in power. George W. Bush won a tough 2004 re-election campaign against John Kerry in spite of his disastrous mismanagement of the Iraq invasion and its aftermath largely by switching the focus to social issues, namely gay marriage, in order to motivate his base. And in nearly every election before and since, evangelicals have been flattered, threatened and otherwise called upon to support the Republican candidate only to have their causes betrayed or ignored after election day once their usefulness was over.

Donald Trump is doing exactly the same thing all over again. But he is so inept and transparent in his attempt to feign Christian piety that a fool should be able to see through his cynical machinations. And yet many bright and decent people are taken in by Trump’s amateur act.

Don’t get me wrong – Hillary Clinton, largely beholden to the Cult of Social Justice and Identity Politics, will be no great defender of religious freedom or interests. But Donald Trump will be little better, as Christians should realise from bitter past experience and Trump’s unique untrustworthiness when it comes to holding true to his stated beliefs on fundamental issues.

Neither candidate, in office, would be a great friend of religion, though Donald Trump would likely continue to pay more lip service to Christian priorities thanks to the composition of the Republican Party. But both options are pretty bleak, and Christians seeking to vote based on their faith would actually be well advised to admit defeat and make their choice based on some other criteria.

Whoever wins this election, it looks quite safe to say that Christianity will lose.