There is no second, deeper layer to Donald Trump. Contrary to what we were promised by Trump’s apologists, what you see is what you get.

It is becoming increasingly apparent that when it comes to Donald Trump’s presidential campaign there is no higher gear after all, and there will be no pivot towards a more serious, substantial candidacy.

As the New York Times reports, this is as good as it gets:

Advisers who once hoped a Pygmalion-like transformation would refashion a crudely effective political showman into a plausible American president now increasingly concede that Mr. Trump may be beyond coaching. He has ignored their pleas and counsel as his poll numbers have dropped, boasting to friends about the size of his crowds and maintaining that he can read surveys better than the professionals.

In private, Mr. Trump’s mood is often sullen and erratic, his associates say. He veers from barking at members of his staff to grumbling about how he was better off following his own instincts during the primaries and suggesting he should not have heeded their calls for change.

He broods about his souring relationship with the news media, calling Mr. Manafort several times a day to talk about specific stories. Occasionally, Mr. Trump blows off steam in bursts of boyish exuberance: At the end of a fund-raiser on Long Island last week, he playfully buzzed the crowd twice with his helicopter.

But in interviews with more than 20 Republicans who are close to Mr. Trump or in communication with his campaign, many of whom insisted on anonymity to avoid clashing with him, they described their nominee as exhausted, frustrated and still bewildered by fine points of the political process and why his incendiary approach seems to be sputtering.

He is routinely preoccupied with perceived slights, for example raging to aides after Senator Marco Rubio of Florida, in his re-election announcement, said he would stand up to the next president regardless of party. In a visit to Capitol Hill in early July, Mr. Trump bickered with two Republican senators who had not endorsed him; he needled Representative Peter T. King of New York for having taken donations from him over the years only to criticize him on television now.

And Mr. Trump has begun to acknowledge to associates and even in public that he might lose. In an interview on CNBC on Thursday, he said he was prepared to face defeat.

“I’ll just keep doing the same thing I’m doing right now,” he said. “And at the end, it’s either going to work, or I’m going to, you know, I’m going to have a very, very nice, long vacation.”

Already the excuses are being made – Trump roars to his supporters that the only way he can possibly lose the election is if Hillary Clinton cheats, thus helping to ensure that the stench of his candidacy will live on in bitterness and distrust even after November when he has flounced back to Mar-a-Lago.

Not that Trump’s advisers are brimming full of their own wisdom:

Charles R. Black Jr., an influential Republican lobbyist supporting Mr. Trump, said the campaign was in a continuing struggle to tame him.

“He has three or four good days and then makes another gaffe,” Mr. Black said. “Hopefully, he can have some more good days.” Of Mr. Trump’s advisers, Mr. Black said, “They think he is making progress in terms of being able to make set speeches and not take the bait on every attack somebody makes on him.”

Mr. Trump’s advisers now hope to steady him by pairing him on the trail with familiar, more seasoned figures — people he views as peers and enjoys spending time with, like former Mayor Rudolph W. Giuliani of New York and former Gov. Mike Huckabee of Arkansas.

Oh good. So lots more pictures of Donald Trump being introduced by an increasingly doddery-looking Rudolph Giuliani, with his frightened shouting about someone taking away his America, played to a soundtrack of Mike Huckabee’s Christian social conservatism. That’ll really persuade wavering Democrats and America’s undecided middle.

But it’s okay – Donald Trump’s family have a hand on the campaign tiller:

Mr. Trump’s reliance on his family has only grown more pronounced. Mr. Kushner, Mr. Trump’s son-in-law, who has no background in politics, has expanded his role: He now has broad oversight over areas including the campaign’s budget, messaging and strategy, with the power to approve spending. Mr. Trump has also continued to seek advice from Corey Lewandowski, the campaign manager whom Mr. Trump ousted in June at his children’s urging.

At this rate it is only a matter of time before Trump announces that Ivanka is his pick for Secretary of Defence. Why not, at this point?

And so the man who recently bragged that he could be “so presidential” that it would make us all bored is proving beyond all doubt that he can do no such thing. Donald Trump does not have a more serious side. The oafish blowhard who takes pride in being simultaneously ignorant and needlessly offensive wasn’t putting on a clever act specifically designed to capture the GOP nomination – that’s just who he is.

It’s not that Trump chooses not to surprise everyone and confound expectations by playing the policy wonk and actually taking the time to read up on issues before running his mouth off on live television – it’s that he is physically incapable of being a mature, intellectually curious potential leader, even if he wanted to be. And even when despairing aides hold their make-or-break “interventions” in an attempt to set him on the straight and narrow, Trump simply smiles and nods, and two days later he is off the Teleprompter again, picking another unwinnable fight or pursuing one of his many personal vendettas.

So more of the same then, from now until November. The Republicans had better hope that there is an entire army of low-information, first time voters willing to put on pants and leave the couch for the first time in 30 years to vote for their man, because otherwise Hillary Clinton will be taking the oath of office on January 20th. 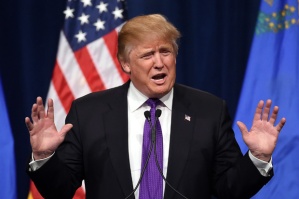 One thought on “Donald Trump: It Doesn’t Get Better”