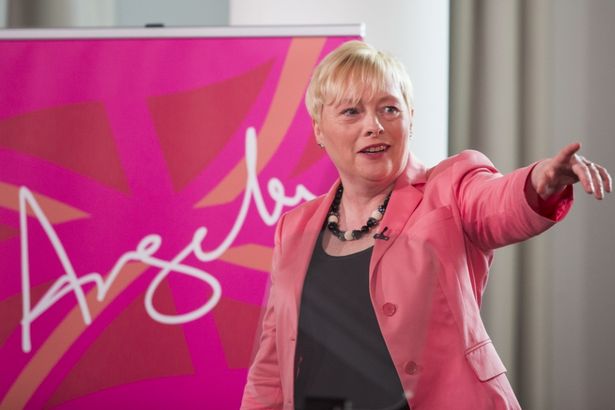 There is a fine line between being genuinely and rightfully offended at a wrong committed against you on the one hand, and going on to burnish and sharpen that grievance into a weapon, cynically deploying it against a political rival on the other.

Angela Eagle is way over that line.

That’s probably not a very popular thing to write, but one sees it over and over again, particularly now with the stultifying rise of identity politics. Weaponised victimhood. It takes a legitimate wrong, a crime or misdeed committed by one person, and uses it to attack the reputation and honour of a third party. And for failed Labour leadership contender Angela Eagle, whose alternative policy platform / vision for Britain struggled to fill half a side of A4 paper, it is apparently the one remaining trick up her sleeve – her last role of the dice in a pathetic attempt to stay relevant.

Labour MP Angela Eagle has criticised Jeremy Corbyn after she was forced to cancel a constituency surgery following police warnings that her safety was at risk just weeks after the murder of Jo Cox.

Ms Eagle, who last week pulled out of the Labour leadership race, said she feared for her staff after a brick was thrown through the window of her constituency office and she was subject to alleged death threats.

She said that in the wake of the abuse police had advised her that her safety would be at risk if she pushed ahead with the public constituency meetings, which were due to be held in a café and a supermarket.

She accused Mr Corbyn of “stirring” hostility in her Wallasey constituency and said he had created a “permissive” environment for the abuse of MPs by his supporters.

Angela Eagle went on to allege:

“I think he has contributed to this. It’s all very well to condemn it but there’s a permissive environment. You can make any number of ritual condemnations as you like but you have got to be judged by your actions not just words.

“He has been stirring, he needs to be held to account. We have contacted the police and they have said we should cancel surgeries for safety reasons.

To be clear: there is no excuse for misogynist or even plain old ignorant verbal, written or physical abuse of anybody at any time, in political life or in the real world. And those people who have sent specific death threats or other threatening communications to Angela Eagle are utterly pathetic, and should be dealt with severely.

But none of those people are Jeremy Corbyn. And the allegation that the leader of the Labour Party is “stirring” the situation is itself an extremely serious charge, one which in any other circumstance might land Eagle in some rather hot legal water.

Precisely what physical actions is Jeremy Corbyn supposed to take to pre-emptively reign in the unhinged, hateful fringe lunatics who can’t keep their politics in perspective and resort to thuggish threats and behaviour? Angela Eagle is suggesting that there is some obvious, specific set of actions which he should take to lower the temperature and calm his wilder supporters, yet she neglects to name a single one.

Eagle says “it’s all very well to condemn it.” What more would she have Corbyn do? Personally monitor the computers of every single one of his supporters simultaneously, 24/7, summarily ejecting them from the Labour Party? It is difficult to know exactly what more she wants, other than for Corbyn to publicly admit to being a terrible human being on live TV, publicly whip himself and promptly withdraw from the Labour leadership contest. Which, of course, is exactly what she wants.

But since we are talking about angry moods being stoked up, let us not forget that the current “crisis” within Labour was precipitated by centrist Labour MPs and shadow cabinet members deciding to use the result of the EU referendum to force out a leader who they never accepted and have been working to undermine since Day 1. These are a group of politicians who, through their utter arrogance and incompetence have totally lost the support of their own activists, and who are held in active contempt by a majority of party supporters. And yet they saw fit to try to achieve through palace intrigue that which they could not achieve through their own charisma or bright political ideas – dislodge Corbyn from the leadership and replace him with another one of their own. If there is anger in the party, who exactly is then to blame?

But back to Angela Eagle and her attempt to shame Jeremy Corbyn with the actions of his most unhinged supporters (something that Eagle and her ilk would be outraged by if we were to do the same thing by, say, condemning all members of a certain religion because of the acts of extremist fundamentalists). For this is what she is doing. Having realised that she cannot win the love or respect of the Labour Party base, she is instead reduced to trying to tear down their hero, putting Corbyn’s name in proximity to the thuggish actions of assorted internet trolls as often as possible in the hope that some of the mud will eventually start to stick.

Now, this blog has no time for Jeremy Corbyn’s left-wing political views. But in an age where politics has been captured by centrism, sanitised and transformed into a dull and largely inconsequential exercise in technocracy, this blog would rather see a party leader with a coherent and sincerely held worldview than yet another telegenic suit with one eye permanently fixed on a focus group report.

Unfortunately, the problem with so-called populist ideas and leaders is that they attract more than their fair share of thugs, losers and carnival barkers. Nobody would have ever called up a rebellious backbencher threatening to kill them unless they backed Ed Miliband’s disastrous leadership of the Labour Party. Miliband, bless his cotton Fabian socks, simply didn’t arouse that kind of passion in people.

But this is not the case for leaders like Jeremy Corbyn or Nigel Farage, people who force (or stumble) their way to national prominence by satisfying some unmet need – or often legitimate grievance – in their many supporters. Does that make Nigel Farage personally responsible for every single act of thuggery ever committed by basement-dwelling losers in the name of UKIP? No. No more than Jeremy Corbyn is responsible for the threats and jabberings of every one of his supporters on the lunatic left-wing fringe.

But time and again we see this soul-sappingly cynical attempt by politicians who have lost the argument against the populists to trick their way back into contention by morally bludgeoning their opponents, holding up the crimes of others to intimidate the innocent into silence. We saw it with the outrageous exploitation of the Jo Cox murder by disgusting people who saw a great opportunity to smear Brexiteers and the cause of euroscepticism in general. And we see it now, with cynical politicians using every nasty piece of correspondence they have ever received to smear Jeremy Corbyn, as though he and Seumas Milne stay up late every night cutting letters out of newspapers to assemble their childish anonymous death threats.

Of course if credible death threats have been made against Angela Eagle then that is truly reprehensible, and is to be condemned loudly and frequently. This blog does so again now. But I am far less disappointed in the basement-dwelling loser who spends his spare time writing rude messages to female MPs than I am with Members of Parliament who seek to take personal threats and seek to make capital out of them at the expense of a political foe.

I expect nothing from the basement-dwelling internet troll. My expectations for the conduct of an elected representative of the people are somewhat higher. And with her latest cynical attempt at weaponised victimhood, Angela Eagle has thoroughly failed to meet those expectations.