Donald Trump is now the Republican Party’s official presidential nominee. And there is plenty of blame to go around.

The theme of Night 2 of the Republican Party convention was “Make America Work Again”. Not that you would have noticed any great difference from Night 1, titled “Make America Safe Again”.

Chris Christie was the highlight of the evening. No matter how much the New Jersey governor may have debased himself since dropping out of the presidential race himself to become Donald Trump’s first and loudest establishment cheerleader, one cannot deny the effectiveness of his prosecutorial convention speech, calling out a litany of Hillary Clinton’s transgressions and inviting delegates to pronounce her guilty or not guilty of each charge (spoiler: the Republican delegates convicted Clinton on all counts).

But that was the prime time agenda, the face that the Republican Party actually wanted to show the country. Before the eyes of America fell on them, the GOP held its state roll-call and officially confirmed Donald Trump as their 2016 presidential nominee.

While some rejoice at the ascendance of a man touting such a populist, anti-establishment agenda – and I can identify with that impulse, in part – there is no denying that this is anything other than a profound defeat for American conservatism, an even lower low than that reached by the Bush-Cheney administration with their fiscal incontinence and calamitous decision to play at nation building in the Middle East.

For Donald Trump is anything but a conservative. He has no respect for the United States Constitution, or for individual liberty – precious things to which the old Republican Party would at least pay lip service. He is an authoritarian, ideologically rootless wannabe strongman who actively scorns policy and loudly insists that all of America’s problems can be solved by simply deciding to start “winning” again. Rather than engage his brain and think about education policy or immigration, or globalisation and free trade, Trump merely promises to hire “the best people” to get the job done.

It should come as no surprise, then, that Trump apparently offered to make Ohio governor John Kasich the “most powerful” vice president in America’s history:

One day this past May, Donald Trump’s eldest son, Donald Trump Jr., reached out to a senior adviser to Gov. John Kasich of Ohio, who left the presidential race just a few weeks before. As a candidate, Kasich declared in March that Trump was “really not prepared to be president of the United States,” and the following month he took the highly unusual step of coordinating with his rival Senator Ted Cruz in an effort to deny Trump the nomination. But according to the Kasich adviser (who spoke only under the condition that he not be named), Donald Jr. wanted to make him an offer nonetheless: Did he have any interest in being the most powerful vice president in history?

When Kasich’s adviser asked how this would be the case, Donald Jr. explained that his father’s vice president would be in charge of domestic and foreign policy.

Then what, the adviser asked, would Trump be in charge of?

In other words, Donald Trump cares so little about actually governing that he was willing to outsource both domestic and foreign policy – that is, the entire US presidency, bar the annual pardoning of the Thanksgiving turkey – to his VP, someone who would deal with all of the boring stuff while Trump jetted around insulting foreign heads of state and acting as America’s global brand ambassador.

This – this – is the depth to which the party of Abraham Lincoln has sunk.

But how? Daniel Larison’s painful evisceration of the rotten Republican Party says it best:

Like Rod Dreher, I see Trump’s success as proof that “the people who run [the GOP] and the institutions surrounding it failed.” They not only failed in their immediate task of preventing the nomination of a candidate that party leaders loathed, but failed repeatedly over at least the last fifteen years to govern well or even to represent the interests and concerns of most Republican voters.

Had the Bush administration not presided over multiple disasters, most of them of their own making, there would have been no opening or occasion for the repudiation of the party’s leaders that we have seen this year. Had the party served the interests of most of its voters instead of catering to the preferences of their donors and corporations, there would have been much less support for someone like Trump. Party leaders spent decades conning Republican voters with promises they knew they wouldn’t or couldn’t fulfill, and then were shocked when most of those voters turned against them. Trump is millions of Republican voters’ judgment against a party that failed them, and the fact that Trump is thoroughly unqualified for the office he seeks makes that judgment all the more damning.

While as Tucker Carlson pointed out back in January (h/t Dreher):

In the case of Trump, though, the GOP shares the blame, and not just because his fellow Republicans misdirected their ad buys or waited so long to criticize him. Trump is in part a reaction to the intellectual corruption of the Republican Party. That ought to be obvious to his critics, yet somehow it isn’t.

Consider the conservative nonprofit establishment, which seems to employ most right-of-center adults in Washington. Over the past 40 years, how much donated money have all those think tanks and foundations consumed? Billions, certainly. (Someone better at math and less prone to melancholy should probably figure out the precise number.) Has America become more conservative over that same period? Come on. Most of that cash went to self-perpetuation: Salaries, bonuses, retirement funds, medical, dental, lunches, car services, leases on high-end office space, retreats in Mexico, more fundraising. Unless you were the direct beneficiary of any of that, you’d have to consider it wasted.

Pretty embarrassing. And yet they’re not embarrassed. Many of those same overpaid, underperforming tax-exempt sinecure-holders are now demanding that Trump be stopped. Why? Because, as his critics have noted in a rising chorus of hysteria, Trump represents “an existential threat to conservatism.”

Let that sink in. Conservative voters are being scolded for supporting a candidate they consider conservative because it would be bad for conservatism? And by the way, the people doing the scolding? They’re the ones who’ve been advocating for open borders, and nation-building in countries whose populations hate us, and trade deals that eliminated jobs while enriching their donors, all while implicitly mocking the base for its worries about abortion and gay marriage and the pace of demographic change. Now they’re telling their voters to shut up and obey, and if they don’t, they’re liberal.

It turns out the GOP wasn’t simply out of touch with its voters; the party had no idea who its voters were or what they believed. For decades, party leaders and intellectuals imagined that most Republicans were broadly libertarian on economics and basically neoconservative on foreign policy. That may sound absurd now, after Trump has attacked nearly the entire Republican catechism (he savaged the Iraq War and hedge fund managers in the same debate) and been greatly rewarded for it, but that was the assumption the GOP brain trust operated under. They had no way of knowing otherwise. The only Republicans they talked to read the Wall Street Journal too.

On immigration policy, party elders were caught completely by surprise. Even canny operators like Ted Cruz didn’t appreciate the depth of voter anger on the subject. And why would they? If you live in an affluent ZIP code, it’s hard to see a downside to mass low-wage immigration. Your kids don’t go to public school. You don’t take the bus or use the emergency room for health care. No immigrant is competing for your job. (The day Hondurans start getting hired as green energy lobbyists is the day my neighbors become nativists.) Plus, you get cheap servants, and get to feel welcoming and virtuous while paying them less per hour than your kids make at a summer job on Nantucket. It’s all good.

This blog agrees: Donald Trump is the fault of every single American conservative who has been in government since the turn of the millennium. It is hard to think of any other political party which so thoroughly alienated its own base through a deliberate campaign of ignoring their interests and showering them with contempt since… since centrist Labour was blown apart by the Jeremy Corbyn revolution in Britain.

The GOP’s corrupt leadership and willingness to con their own voters (particularly by exploiting wedge social issues to little effect while pursuing the same old failed economic policies) is the reason why the Republican base turned en masse against establishment conservatism, preferring even an authoritarian strongman like Trump to another moment of their sanctimonious, self-serving rule.

This is happening. There will be no white knight to swoop in and save the day, snatching the nomination away from Donald Trump. The Republican Party have already bestowed their blessing and their nomination. And everybody who shares the same stage in Cleveland – even the good ones, like Paul Ryan – are now tainted by association with him.

And when the Republican Party is picking through the wreckage on Wednesday 9th November, there will be plenty of blame to go around. 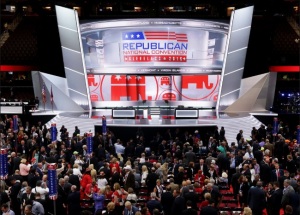