I’m strongly inclined to agree with Archbishop Cranmer’s take on the decision by the major political parties not to contest the Batley and Spen by-election brought about by the despicable murder of Jo Cox, essentially giving Labour a free run at a seat they were almost certain to hold regardless.

The Lib Dems and Ukip have joined the Conservative Party to announce they will not contest the by-election in Batley and Spen resulting from the death of Jo Cox.

Mrs Cox, 41, died yesterday after she was stabbed and shot outside a library in Birstall.

The Labour MP had held her seat in West Yorkshire since the General Election last year, which she won with a majority of 6,057.

No date has yet been set to elect a new representative.

To which Cranmer writes in response:

Whoever Labour chooses to be their candidate will be gifted a seat in Parliament. We honour a murdered democrat by suspending democracy. Our political leaders respect her values – service, community, tolerance – by treating her former constituency as heritable property. There can be no disjunctive voice, no division and no dissent: Jo Cox’s values, her political philosophy and her apprehension of the world order must be perpetuated “as a mark of respect to a much-loved and respected politician”. The Batley and Spen by-election thereby becomes a memorial, and her successor a living monument.

[..] The thing is, there is something odd in not contesting a seat after a sitting MP has been murdered:

So the last uncontested by-election in this tragic circumstance was in 1922 for North Down (which had occasional uncontested elections into the 1950s).

Perhaps things have moved on since the murder of Ian Gow: 26 years is an eternity in politics. Or is it that only murdered Protestants and Tories have to be challenged in the hope of driving their particular brand of hatred, division and intolerance from public life? Whatever, the decision not to contest Batley and Spen permits the Labour Party to put into Parliament anyone they want. Although it is extremely unlikely that the seat would have changed hands, it is an offence against democracy to respond to attack upon democracy with a rigged political appointment. Far better for all the main political parties to put up a full slate of candidates, and then for  those candidates to selflessly exhort the people of Batley and Spen to vote Labour as a mark of respect to a much-loved and respected politician. At least then the people would have been free to honour Jo Cox’s values of service, community and tolerance as they would wish to do, instead of being coerced into a contrived expression of political unity, or hectored into a mellow manifestation of Anglican generosity and integrity.

“A contrived expression of political unity”. And isn’t that all that this would be – like the symbolism of MPs mixing it up in parliament and sitting next to members from opposing parties on one day before calling each other’s motives and morals into question again the next? If so, it hardly seems like a good enough reason for the suspension of democracy in one constituency.

And let’s not pretend that this will not happen. The Labour Party in particular have tremendous form in suggesting that those with conservative leanings are morally defective or singularly lacking in compassion. Is this all to cease now, because of the awful murder of Jo Cox? Will Labour MPs finally accept that it is possible to care about the poor and the vulnerable while believing that conservative policies are best for them and the country? I wouldn’t bet on it.

In fact, while there is an undeniable and odious far right element in British politics at the fringes, in terms of the voices currently heard in parliament and in the mainstream media, I would argue that it is the supposedly morally virtuous Labour Party which is guilty of most of the intemperate and divisive rhetoric heard today. And if we are to be political about it, if one party’s behaviour has been least deserving of being given a free run in a by-election, one could make a strong case that it is the Labour Party.

And yet how things seem to have changed. As Archbishop Cranmer points out, after the brutal assassination of several other MPs during the twentieth century, the idea of suspending competitive by-elections was never even considered. Of course the affected constituents should pick themselves up and avail themselves of their democratic right, was the prevailing thinking. And yet in 2016, in order to show solidarity or respect (or in actual fact, I’m almost hesitant to say, to signal virtue) it is apparently necessary to suspend democracy. To make a nice gesture.

As a society, we are getting very good at making nice, sentimental gestures in the face of tragedy. In the West, we have become particularly adept at lighting up our national landmarks to mourn terrorist attacks in one country or another. And there is obviously an important place for vigils, and grieving, and ritualised mourning. But it rather seems that this is now all that we can do. We can make the public gesture but not change the behaviours which makes the gesture necessary in the first place.

Just as one can predict with fearful certainty that the London Eye, Eiffel Tower and Brandenburg Gate will soon be lit up in the national colours of the next country to face a major terror attack while our politicians remain unable even to properly articulate the nature of the Islamist terror threat which we face, so it seem we are now about to celebrate democracy by effectively suspending it. In a twisted homage to Jo Cox, we are about to allow the Labour Party, through whatever opaque selection process they choose, to parachute a new MP into parliament without giving the people a real choice.

There are many appropriate ways to pay tribute to the late Jo Cox, a universally liked MP and the cruel victim of presumed far-right terrorism (for we should call it what it is). But the spectacle of an uncontested by-election, or a by-election fought only by a handful of ugly fringe candidates, is not one of them.

And for once, it would be gratifying if our commitment to democracy could trump the desire to make ourselves feel good with showy but ultimately counterproductive demonstrations of virtue. 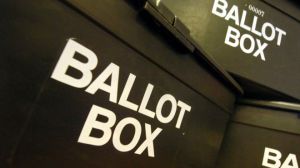