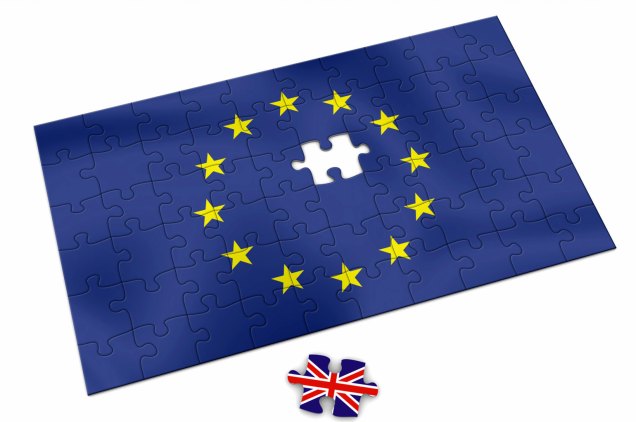 An explosive new poll has showed overwhelming support for a staged EFTA/EEA (Norway Option) Brexit approach in the event of a Leave vote in the EU referendum, extricating us from political union while maintaining the all-important short term economic stability. All serious Brexiteers must now coalesce around this plan

The Brexit blogosphere is reporting early warning of a new dynamite poll – far more interesting, I think, than the Independent poll showing Leave implausibly ahead by 10 points – which shows significant public support for Britain leaving the EU via a staged process maintaining access to the EEA (single market) in the same way as Norway.

The poll was commissioned by the Adam Smith Institute, who helped to shift the debate onto this ground by adopting the “Flexcit” plan developed by Dr. Richard North and readers of the eureferendum.com blog, promoting it in an essay “The Liberal Case For Leave” (authored by Roland Smith).

The purpose of the poll is quite clear – to show  that these is an as yet unmet public appetite for a staged approach to Brexit which extricates Britain from undemocratic and unwanted political union while also minimising risk.

As Tony Edwards of The Brexit Door blog reminds us:

Norway’s position is that it is in EFTA, and is a participant in the single market via the EEA agreement. It retains freedom of movement for workers, and enacts single market law (not all EU law, but about 25% of the total number of legislative measures in the EU acquis). It is not subject to the ECJ, or party to the CAP/CFP policies. It does not apply the common EU position on global bodies, it has sole competence for trade negotiations (despite making joint agreements with EFTA partners), and is not subject Justice of Home Affairs policies or collective foreign policy.

It has been the view of Flexcit advocates and The Leave Alliance that this is not only by far the most attractive approach in terms of allaying public fears and winning the referendum (without which any other differences between Brexiteers are rather academic), but that it is also the most practical and responsible way to extricate Britain from a complex political union at a minimum of risk. This poll would now seem to strongly vindicate that belief.

The key question posed by the poll was the following:

And thinking just about the shorter term, the five or ten years immediately following Britain leaving the EU, would you support or oppose Britain having a relationship like Norway has, allowing citizens of other EU countries to live and work in Britain in exchange for keeping full access to the single market?

And the headline results are overwhelmingly in favour of just such an approach: 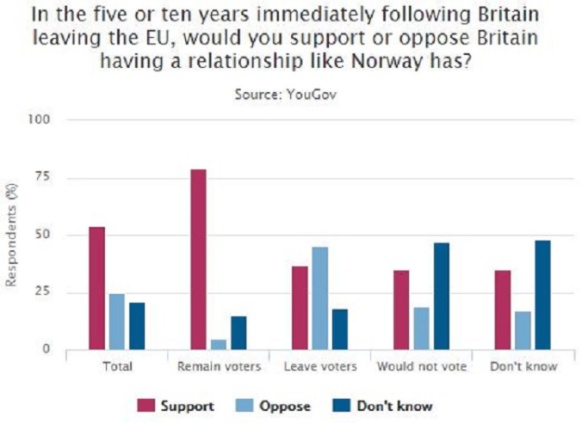 This shows overall support for the interim EFTA/EEA (Norway) Option of 54 percent, against just 25 percent opposed, with 21 percent unsure. And among those currently intending to vote Remain, 79 percent are in favour of such a staged Brexit approach, while only 5 percent are opposed.

Ben Kelly of The Sceptic Isle blog breaks it down:

The YouGov poll, commissioned by the Adam Smith Institute, shows that British voters would overwhelmingly support the “Norway option” in the event of a vote to leave. Support for this arrangement outweighs opposition by two-to-one. This poll destroys the arguments of extremist Brexiteers and those stubborn remainers who believe a market based solution would be unacceptable to the public.

Reality is sinking in; if there is a vote to leave we will commence leaving political and judicial union but remain in the Single Market.

This is the one subject on which extremist Brexiteers and ardent remainers have agreed on. Both have made exactly the same dubious counter argument; that if the British government were to remain in the Single Market it would be un-democratic and the public would simply not accept it. They have long maintained that a “leave the European Union” vote must also mean leaving the Single Market. Both have regrettably attempted to frame this referendum as a vote on immigration which it clearly is not. Both make ridiculous assertions that the public will “revolt” against a market based solution.

We have said for some time that this was nonsense; that the economy is the number one concern and the public would support an economically safe exit. Now we have the data to prove it.

Since the Norway Option (and the incredibly thorough and detailed Brexit plan resting behind it) have become more prominent in the national debate, its opponents – Remainers and a stubborn but vocal subset of Brexiteers – have been doing everything in their power to mock, discredit and otherwise slander the plan.

The Remainers’ motivation is obvious – if it can be shown that Britain can leave the unloved political union of the EU while maintaining full access to the single market, nearly all of their apocalyptic fearmongering arguments about economic ruin are immediately blown apart, leaving the Remain campaign entirely without a case.

(Even now, some Remainers are attempting to cause mischief and cast doubt on the interim EFTA/EEA route wherever they can – because Britain’s continued participation in the single market is the Achilles heel of their case for Britain to stay locked in political union.)

The Norway Option’s opponents among Brexiteers tend to be the ignorant (including those who do not understand that it is an interim step designed to ensure economic stability while 40 years of political union are unpicked) and those who want to campaign on a platform of vastly slashing immigration and doing it yesterday, even if it means losing the referendum because moderate voters recoil.

However, this new poll suggests that the interim EFTA/EEA approach to Brexit is an idea whose time has come. With so much garbage being spewed by the official campaigns on both sides of the debate, more and more people are turning in desperation to alternative news sources and alternative scenarios not being discussed by Boris Johnson or the establishment pin-ups of the Remain campaign.

With less than two weeks to go until Referendum Day, we are finally arriving at a consensus – and we have done so despite, rather than because of the official Vote Leave campaign which has been barking about immigration and the NHS to the extent that people are tuning it out.

There is a hunger out there for somebody to present a more grown-up plan for Brexit, one which acknowledges political realities and constraints that even low-information voters perceive to exist. And now we have that plan. What’s more, as the ASI/YouGov poll shows, when the outline of the plan is explained to voters they respond very favourably.

This poll is dynamite. It shows that the scaremongering, falsehoods and outright dismissals poured on the Norway Option by Remainers and short-sighted Brexiteers have had no effect. It shows that a majority of Britons are sensible enough to realise that undoing 40 years’ worth of political integration with the EU may not be advisable to attempt in one short sharp burst, and that a plan which gets us out of the political union (and free from any future attempts at further integration) while maintaining economic stability – the top issue for voters – is potentially very popular.

The only ones who now do not accept this are the blinkered leaders of the official Leave campaign. But the EFTA/EEA route has momentum now – it will not go away just because its existence is inconvenient for Boris Johnson or the other big names of Vote Leave.

At last, Britain is starting to coalesce around a politically viable (and physically deliberable) Brexit plan. The single

This is no time for triumphalism, as Tony Edwards warns (his emphasis):

For those who have seen the polls of the last week and think that Leave has this referendum in the bag, I suggest a moment of reflection. Even if they are correct, there is every chance that the government will be able to scare people in the coming days, that there will be a resurgence for Remain. Polls are never the whole story.

But polls can help to suggest to us in broad strokes what we think the public will accept, and we should begin by offering that option to them, explicitly and clearly, before the Referendum. When the margins are as large as the ones that You Gov have reported in this particular survey, I think it is safe to say that the Staged Brexit approach via EEA/EFTA, is the only option that is likely to receive sufficient support in the country and in Parliament to be able to bring together the opposing sides if we vote to leave.

But with many moderates still undecided as to how they vote, there are clearly a significant number of Britons who may be very receptive to this new information. And hopefully the Adam Smith Institute / YouGov poll will inspire more influential pro-Brexit voices to begin making that pitch to voters.

We could yet win this thing.