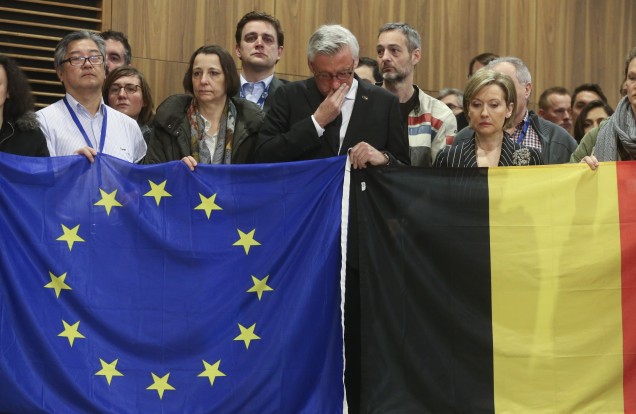 There is a welcome glimmer of realisation in today’s New York Times that repeated attempts to artificially force political union on the disparate peoples of Europe (alternately by threat and by stealth) is leading to increasingly suboptimal outcomes.

Official Europe has worked hard to move past nationalism, so that there is no German or French Dream. But there’s no European Dream, either, not yet. So new migrants have no spirit to tap into, as they do in the United States. Instead, some Muslims find it more attractive to give their loyalty to Allah, their fellow believers or the Islamic State.

Intelligence services estimate that up to 6,000 jihadists from Western Europe have traveled to join the Islamic State. This enormous figure does not illustrate merely the failures of integration policy. It also shows the failure of mainstream European Muslims to keep their youth immune from extremism.

A result of this mutual apathy is too many Islamists, and too few police and intelligence officers — particularly in Belgium, but not just there. We may have a common European currency, but we still do not have a common European terrorism database. Islamists in Western Europe seem better coordinated than the European authorities hunting them.

There is a creeping awareness too that the head-in-the-sand insistence by many Western leaders that Islamist terror has “nothing to do with Islam” has been a textbook case of wishful thinking overriding political judgement, even common sense:

For the sake of social peace, after the Sept. 11 attacks, and later after the Madrid and London bombings, we told ourselves that Islam and Islamism had nothing to do with each other. But sadly, they do. The peaceful religion can sometimes serve as a slope into a militant anti-Western ideology, especially when this ideology offers a strong sense of belonging amid the mental discomfort of our postmodern societies.

That’s not to say that the article is right about everything. At one point it lapses back into the lazy, unthinking assertion that the European Union is solely responsible for keeping the peace since the Second World War:

So are Germany’s critics right? Is it reasonable to pull up the drawbridge?

In a way, the very question shows the disproportionality of the thought — unless you think it’s worth sacrificing 60 years of peace and international cooperation to the depredations of terrorists. It’s what they want; European disunity, confusion and extremism put them a step closer to the all-out war between Muslims and non-Muslims they so desperately seek.

The notion that the leaders of Islamic State – or radical jihadists in general – could give a hoot whether the Western European countries they so fervently loathe are grouped together under a single political umbrella or under their own auspices is ludicrous beyond words.

The home-grown radical Islamist terrorists from Belgium, Britain and France do not feel any allegiance to Europe or to their own particular country. Their only allegiance is to their warped strain of Islam, which teaches them to loathe anything and everything which does not conform to a very fundamentalist, conservative and specific worldview.

If anything, the European Union’s insistence on subordinating the national identities of individual member states in a thousand ways large and small, and attempting to shoehorn in an artificial new European identity which consistently fails to take root is primarily responsible for allowing a radical Islamist identity to creep in between the cracks.

If the European Union is the vehicle for international collaboration that its cheerleaders consistently claim, then it would focus on intergovernmental co-operation – for that is what will do the most good thwarting future terror attacks. But the EU doesn’t particularly care about co-operation between security services. Such matters are exquisitely boring to the architects and drivers of European political integration, who care only about creating a single European state.

Consider: if the European Union is a benign and non-threatening group of countries coming together to trade and solve common problems (like the threat of Islamist terrorism), why is such a tiny fraction of its budget – and an even smaller percentage of officials’ time – spent on enhancing intergovernmental co-operation so that agencies and forces work seamlessly together when they most need to?

No, the European Union has a flag, anthem and parliament for a reason – because those are the things that matter to them, the building blocks of political union. Sure, the EU’s leaders are happy to take advantage of the Brussels terror attacks – as they do with every other crisis – to declare that the only solution is “more Europe”. But the more Europe they have in mind won’t do a damn thing to thwart future terror attacks. It will only make them more likely.

Building a politically unified European state involves first dissolving existing national identities, and then replacing them with a new European identity commanding the loyalty and affection of the people. The EU has been moderately successful at the former, but absolutely hopeless at the latter. Staggeringly few people see themselves as European first and foremost – nearly all retain primary loyalty to their country, or in some cases to a region – like Scotland or the Basque region.

And as the nation state is undermined on one side while the vaunted new European identity consistently fails to materialise, this creates an ever widening gap which can be filled by Islamist extremist recruiters and terrorists. When there is no healthy sense of national identity, first and second generation immigrants may struggle to assimilate, and sometimes they will find meaning and belonging in undesirable places.

None of this should be shocking. Much of it was entirely predictable. But the European Union – who are now sickeningly claiming that they were the true victims of the attack, as though a self-important bureaucratic talking shop even registers on the Islamic State’s radar – refused to take the threat seriously, because it was too busy building up the appearance and trappings of a state.

Proper co-operation and coordination between national intelligence services does not require a European Parliament, a European Council, a flag, an anthem or pretensions on the world stage. If the EU really cared about keeping its citizens safe first and foremost, it could immediately deprioritise all further steps toward political integration, roll back its outsized role in supranational governance and focus on facilitating the kind of basic inter-governmental cooperation that might have feasibly prevented the Paris and Belgium attacks.

But of course the European Union will never do this in a million years. Because the EU has some other objective, far more important than trifling concerns over national security, on its agenda.

Now what could those other priorities possibly be?