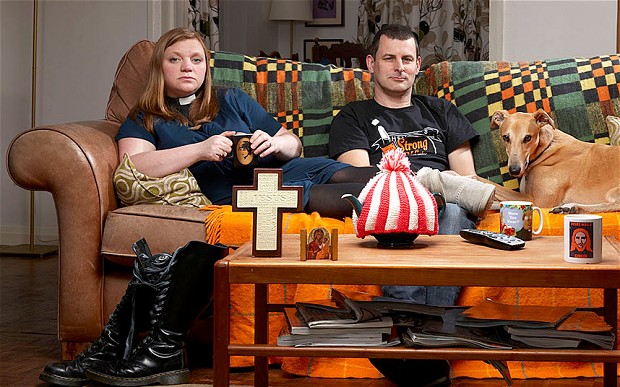 What to do when the established church makes no attempt to hide its hatred for conservatives?

Those who watch Gogglebox are no doubt familiar with the Reverend Kate Bottley, whose ambassadorship for the Church of England probably reaches many millions more people than most bishops.

Should we be concerned, then, that one of the established church’s most high profile characters holds a seething contempt and hatred for one of our country’s two main political parties?

Archbishop Cranmer lays down the charge, based on Bottley’s recent on-air admission that “I hate it when I agree with a Tory”:

She wasn’t wearing her dog collar this week, but she doesn’t need to: the whole country knows (and so do Channel 4 editors and producers) that she is a Church of England vicar and a minister of the Word. And she is very well liked and respected: there is no hint of moral or doctrinal delinquency, but national admiration for her personal spirituality and great teaching capacity. She is a manifestly gifted, active communicator who is dedicated to serving her parish.

But ministry isn’t simply service, for that is the whole of Christian life. Her task as a vicar is distinctively liturgical, catechetical and pastoral, principally for the needs of the whole Christian community, including Tories. As an ordained priest, she is both servant and shepherd among the people to whom she has been sent, and that includes Tories. Her task is to proclaim the Word of the Lord and to watch for signs of God’s new creation, including in Tories. Her vocation is to teach, admonish, feed and provide for her flock, which includes Tories.

The majority of England is instinctively conservative: it appears to be a natural disposition; an affinity with the natural order; part of the psyche of essential Englishness. The Rev’d Kate Bottley is by no means obliged to approve of that: indeed, she is free to repudiate its consoling power and turn her religious fervour to more meaningful transcendent bonds. But you’d think there might be some sensitivity to the political-philosophical implications for mission praxis. Why should those Tories who attend her church bother to listen to her tell the story of God’s love, if all the time she is pinching her nose at their spiritual halitosis? Why should all those Tories who watch Gogglebox even consider walking with her in the way of Christ, hoping to be nurtured and encouraged in their faith? Why should they gather round the Lord’s Table if their vicar deems them to be unworthy or unable to resist the evil philosophies of men?

Bottley is far from an isolated case. Seething anti-Tory sentiment clearly exists much higher up in the church hierarchy, too, judging by the Bishop of Manchester’s decision to play host to Jeremy Corbyn and a left-wing rally coinciding with the Conservative Party conference taking place in the city.

Long gone, it seems, are the days when the Church of England was commonly known as the Tory party at prayer. And with church personalities using their pulpits to inveigh against right-wing policies and pontificate on the supposed dangers of Brexit, the time has come to urgently look again at the privileged position which the partisan established church holds in our constitution.