Earlier this month I had the privilege of attending an event organised by Spiked, entitled “A New Intolerance On Campus”.

The final panel of the day focused on the question “Is hate speech free speech?”, and while it was a little unbalanced (Dan Hodges was due to provide the counterpoint opinion but was unfortunately unable to attend) there were eloquent arguments in favour of unrestricted free speech from Brendan O’Neill, Maryam Namazie and particularly Douglas Murray.

While the arguments expressed here will be familiar to anyone who closely follows the debate on free speech and the climate of censorship on university campuses – particularly those who have read Mick Hume’s worthwhile book “Trigger Warning: Is The Fear Of Being Offensive Killing Free Speech” – the video is still worth a watch. 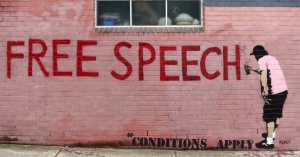