Jeremy Corbyn’s yellow submarine proposal is nothing but a white elephant, with all the cost and none of the benefits of nuclear deterrence

Spare a thought for those in peril on the Labour Party’s Trident renewal commission. As they seek to square their leader’s avowed nuclear disarmament stance with the parliamentary party’s broad support for Trident renewal, they are being forced to consider – and publicly discuss – ever more ridiculous potential compromises.

Jeremy Corbyn’s latest proposal is particularly bad, and would involve spending billions of pounds designing and building the next generation Trident submarines, but – crucially – not arming them with any new weapons.

Jeremy Corbyn has suggested the UK could have Trident submarines without nuclear weapons, a move that would mean disarmament while protecting defence jobs in Scotland and Cumbria.

The Labour leader raised the idea on the BBC’s Andrew Marr Show as a possible compromise between his opposition to nuclear weapons and the position of the trade unions, which want to protect the jobs of workers who will build replacement Trident submarines.

In an interview over the weekend, the Labour leader argued it was not a binary decision on whether to replace Trident submarines, suggesting a possible compromise. Pressed on the Marr Show as to what this meant for Trident, Corbyn said: “They don’t have to have nuclear warheads on them.”

[..] Asked again whether he was suggesting that new submarines could be built to be used without nuclear warheads, Corbyn said: “There are options there. The paper that Emily Thornberry has put forward is very interesting and deserves study of it. I hope there will be a serious and mature response.” He also stressed that he would want to maintain employment for people in the defence industry, who would be involved in building Trident submarines, as a “first priority”.

Thornberry told the BBC’s Sunday Politics: “The way that it works is that the Japanese have got a capability to build a nuclear bomb…[but] you can then put them on to, or you can use them, in various delivery forms. So that’s a possibility, that is an option.” She said she would not speculate on what the review would recommend but she added that Corbyn “said there’s a number of options, and I said the Japanese already have this as the way that they use theirs”.

Nuclear-powered submarines capable of carrying and launching Trident nuclear warheads are very expensive, as you would expect from high-tech stealth technology designed to last for a generation. Their only value is the fact that they provide a near-undetectable, continuous at-sea presence, so that any would-be aggressor knows that whatever attack they may launch at Britain, a retaliatory response always remains possible.

But at least this ludicrous defensive gap of the Conservative government’s making is only temporary. The aircraft to complement the Queen Elizabeth class carriers will follow the commissioning of the ships, albeit an embarrassing couple of years late.

Not so the Trident missiles to supply the next generation of submarines. Under Jeremy Corbyn’s proposal, Britain’s four (or three? Two?) new Vanguard replacement submarines will dart around under the ocean carrying no weapons and providing no deterrence of any kind. In fact, they may not launch at all, since Jeremy Corbyn probably sees little value in keeping a Navy. So in theory, Britain could end up spending over £20 billion designing and building four new ICBM-carrying submarines, only to sit back and watch them grow cobwebs in dry dock.

Jeremy Corbyn would counter – and indeed his ministerial colleague Emily Thornberry has already pointed out – that Britain would retain the ability to produce nuclear weapons under Labour’s latest plan. But this is extraordinarily misleading. By their nature, the kind of potential nuclear crises that Trident protects us from every day are impossible to anticipate and come about suddenly or with no warning. And in such cases, having the ability to one day rebuild a nuclear deterrent capability is very far indeed from having a system already live and operational.

In cases of nuclear blackmail or brinkmanship, it is not enough to say to our enemy “just you wait 12 months while we build our own nuclear weapon to destroy you, then you’ll be sorry!”. When you need the credible threat of nuclear weapons, you need it now, not after a lengthy lead time during which our design and construction facilities would be vulnerable to sabotage from within or attack from without. But this is precisely what Jeremy Corbyn proposes.

This is socialist pacifism at its most absurd. When people criticise Corbynite policies, their defenders retort that we misrepresent them by taking their publicly expressed ideas to illogical extremes. But in this case, Jeremy Corbyn himself has stated that the illogical extreme is his preferred option.

Jeremy Corbyn’s Britain would be a country which builds things not to use them or gain any utility from them at all (in this case the valuable insurance policy of nuclear deterrence), but rather just to give the people with a vested interest in their construction something to do. In this perverse worldview, keeping union chiefs happy and workers employed is a worthy national objective, but guaranteeing Britain’s national security and promoting our interests by ensuring that we are taken seriously as a military power is of no importance.

But never let it be said that the Corbynites don’t do compromise. Jeremy Corbyn may find the idea of nuclear weapons – or any military spending at all, really – to be morally repugnant and utterly indefensible, but because the trades union like the jobs which come from submarine construction and maintenance, he is willing to tolerate Britain’s continued construction of the things – just so long as we don’t ever use them.

What next? Why not have the armed forces spend all their time rolling massive boulders up hills in the Peak District, sending them tumbling down and pushing them back up again, in order to give the military something to do which doesn’t involve handling weapons? Why not extend the same principle to the British people at large, and pay everyone currently on JSA thirty grand a year to do the same?

A nation of people industriously labouring away to build complex, expensive machines whose purpose they fail to understand, and which they neither appreciate nor value. Just so that people have something to do besides watching Jeremy Kyle on daytime TV. 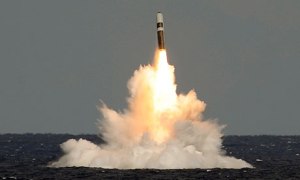