Being heckled and pilloried by obnoxious online trolls is a regrettable part of the job description for any 21st century MP. But the right answer is to ignore the idiots and move on, not to impose draconian codes of conduct or prison sentences for insulting speech

When Britain is in the midst of debating great issues of war and peace, it is frankly astounding that much of the media seems more concerned with the hurt feelings of Labour MPs threatened with deselection by angry constituents than the consequences of British military action in Syria.

In the aftermath of the Syria vote in parliament, I saw one newspaper headline in particular that represented such an unhinged piece of self-aggrandising hyperbole that it made me do a double-take:

Apparently, by failing to assume direct control of the hearts and minds of every single one of his supporters – and physically preventing them from blowing off steam in the aftermath of the Syria air strikes vote in Parliament – Jeremy Corbyn is personally responsible for endangering the lives of those MPs who voted with the government for military action:

Jeremy Corbyn has made his MPs targets for home-grown jihadists in the wake of the vote to back Syrian air strikes, a shadow cabinet minister has warned.

The accusation that MPs are being left open to revenge attacks came as a backbencher made a formal complaint to Labour’s chief whip over Mr Corbyn’s “despicable and deliberate” threats over the Syria vote which he said will lead to “personal violence” against MPs.

In the immediate aftermath of the vote, which saw 66 MPs defy Mr Corbyn to back David Cameron’s plans for military action, Labour Unity, a hard-left organisation linked to the party leader, released a “traitor list” of backbenchers who should be targeted for de-selection.

Mr Corbyn and his allies have been directly accused of “aiding and abetting” the intimidation of Labour MPs by leaking the names of MPs preparing to back the Government in recent days.

This is not a joke. A member of the Labour Party shadow cabinet – a fully grown adult with an important constitutional role to play in our democracy – serious believes that by expressing his scepticism about air strikes on Syria, Jeremy Corbyn has made dissenting MPs vulnerable to terrorist attack. They believed it strongly enough – or hated Corbyn enough – to give these quotes to a national newspaper.

First of all, Jeremy Corbyn needs to identify who this self-aggrandising crybaby is, and kick them so hard out of his shadow cabinet that they end up back in local government debating bin collections and street lighting. Such brazen disrespect of the leader is absolutely intolerable in a serious political party.

Jeremy Corbyn, of course, tolerates self-important asides from whiny, self-entitled members of his own shadow cabinet every single day, which suggests that he has the patience of a saint, whatever his many other flaws. But no leader should expect to be confronted with daily leaks and insubordination of this kind from their own shadow cabinet, particularly scurrilous juvenile fantasies that he is somehow endangering the lives of his colleagues simply by disagreeing with them.

This blog agrees with almost none of Jeremy Corbyn’s socialist platform, but this open defiance of the leader has to stop if the Labour Party ever hope to be taken seriously as a cohesive force in British politics. Right now, the only hope for the Labour centrists is that Corbyn proves himself to be so unelectable in the London mayoral, local and devolved assembly elections that real momentum builds for him to be replaced.

By constantly snarking and running to their media sources in the media every time Corbyn’s leadership style hurts their pwecious wittle feewings, Corbyn will be able to point to all of this insubordination later on, when he is on the ropes, and say that he is failing not due to a popular rejection of his policies but thanks to disloyalty from his own shadow cabinet. This is the last thing that the centrists should want, but in typical myopic fashion they are totally incapable of looking more than one step ahead. 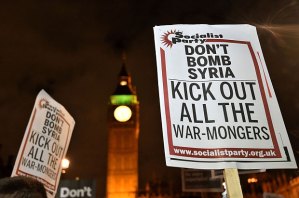 But it’s not just the fifth column within Jeremy Corbyn’s shadow cabinet who are at fault. An increasing number of MPs from all parties (but particularly Labour) are speaking out, claiming that robust and sometimes distasteful criticism of their political views and voting records is somehow tantamount to “bullying”.

This has now reached the point where even expressing the view that your MP is doing a bad job and should be deselected as their party’s candidate at the next general election is also being described as “bullying” by some self-entitled and wobbly-lipped MPs.

Ann Coffey, who has represented Stockport since 1992 was told: “Get behind the leader or kindly go.”

In response, she said she will “await the assassins to come out of the shadows”.

Assassins? What Ann Coffey is referring to is the great fear now stalking the Parliamentary Labour Party – deselection.

While the Metro reports on the party establishment’s hurt response:

Shadow home secretary Andy Burnham, who voted against air strikes, called on Mr Corbyn to show ‘no tolerance’ of abusive behaviour within the party and said a code of conduct was needed for members’ use of social media.

He was particularly disappointed with the treatment colleague Ann Coffey had received after voting for the strikes.

‘She has served Stockport, her constituents and our party for many years with distinction, and people need to have a look at themselves before they go around throwing threats at people like that,’ he told BBC2’s Victoria Derbyshire Show.

Whether Ann Coffey has served her constituents and her party well or not is beside the point – it is not for Andy Burnham, a fellow MP, to decide on behalf of Coffey’s constituents whether or not she should continue to be their Labour Party candidate, nor to shield her from public criticism.

This is a ludicrous state of affairs. MPs are grown adults, serious people who should be capable of participating in the rough and tumble of democratic debate without needing some higher authority to step in and moderate the debate to spare their delicate sensitivities.

Let’s get a few things straight. First of all, if you’re over 16 – let alone a prominent politician – you’ve got no right to claim you’re being bullied. Bullying is what happens in the playground. And most kids put up with far worse than a few nasty emails. It’s pathetic. Secondly, being called a ‘baby killer’ isn’t nice, but it’s not abuse or intimidation. It’s political critique – asinine, sixth-formerish, idiotic political critique, but it’s political critique nonetheless. And as for those who have claimed to have received death threats, they’re just not credible. Neil Coyle MP contacted the police, all because someone tweeted three knife emojis to him. Jesus wept.

[..] This is bad news for politics. The war on trolling, we were told, was all about protecting poor, vulnerable people from being hounded out of the public square. Now, 40-plus politicians are using the same language to protect themselves from criticism. In these strange political times, we need more conflict, more argument and, yes, more abuse-hurling. Politicians crying foul when someone disagrees with them – that’s what the ‘kinder, gentler’ politics looks like.

It is bad enough that our universities – supposedly places of intellectual rigour and ‘no holds barred’ debate – are turning into soft cornered safe spaces where delicate snowflake students insist on being protected from ever having to encounter a dissenting or provocative opinion. But apparently the disease has not been contained and has spilled over the borders of academia into the very heart of our democracy, the political sphere.

This is exceedingly dangerous. Angry, safe space-dwelling students are proving themselves more than capable of stifling debate, changing whole curricula and agitating for decent staff to be fired, despite having almost no formal power in the university hierarchy system. How much more damage, then, can elected MPs do to our already-weakened free speech rights when they are the ones setting the political agenda and making the laws that we must follow?

Enough is enough. Being told that one has blood on one’s hands because of a vote for military action may be jarring, unsettling and nasty. But MPs should be able to separate the wheat from the chaff, and engage with those constituents who engage with them respectfully, whilst either ignoring or belittling those who are rude or aggressive.

In fact, Labour MP Stella Creasy herself – usually leading the charge to criminalise Twitter abuse – inadvertently demonstrated how best to handle mean Twitter insults in the aftermath of the Syria vote when she responded to a member of the public who swore at her and called her a witch:

Highlight the idiocy, publicly smack it down and move on. Or simply ignore the haters altogether. That’s all an MP has to do.

This should be the model which all MPs follow, all the time. Engage with the genuine constituents, especially when they are legitimately angry. Ignore those who are gratuitously mean, insulting or belligerent. But only report to the police those who make serious and credible threats of physical harm.

This is how anyone who has ever worked in a private sector customer service job would handle their interactions with the public every single day. Ask any London bus driver if they call the police every time they are demeaned, insulted or “bullied” while at work, and they would laugh in your face. When you work in a tough job like that, you grow a thick skin.

We should expect no less maturity (in the face of occasional public immaturity) from our elected representatives in Parliament. 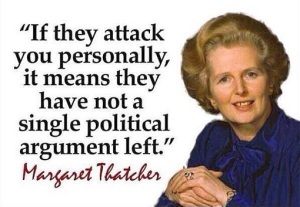