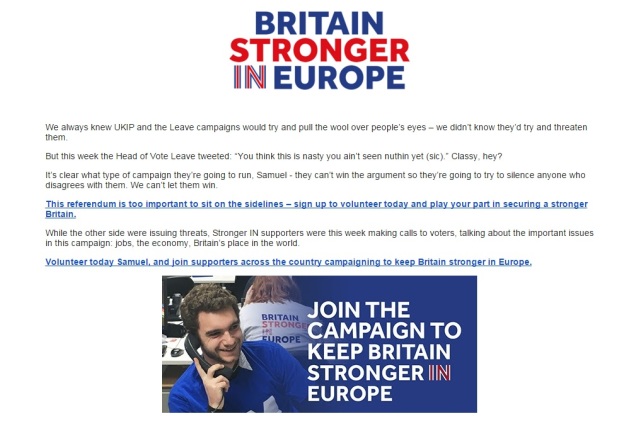 The Britain Stronger in Europe campaign group sent this victimhood-wallowing missive to their supporters today:

We always knew UKIP and the Leave campaigns would try and pull the wool over people’s eyes – we didn’t know they’d try and threaten them.

But this week the Head of Vote Leave tweeted: “You think this is nasty you ain’t seen nuthin yet (sic).” Classy, hey?

The “threat” that so upset BSE was a couple of young Vote Leave activists who stood up in the middle of a speech the Prime Minister was giving to the CBI and started shouting “CBI, voice of Brussels!” over and over again.

While it’s a documented fact that the CBI grossly misrepresented a survey of their membership to falsely claim that a majority of British firms back staying in the EU, these two first-time hecklers were hardly political heavies sent to intimidate the opposition. In fact, they were pretty poor even by modern dumbed-down heckling standards – the prime minister came off looking simultaneously wittier and more serious by the time the Vote Leave duo were escorted from the hall.

Watch this video of the encounter, and judge for yourself who comes across as calmer and more intelligent:

Hilariously, BSE are now parading the incident to their supporters as evidence of some dastardly eurosceptic plot to threaten all those sweet, innocent europhiles.

And now failed Labour leadership candidate Chuka Umunna is getting in on the act too, writing in the Telegraph:

Rather than seeking to promote debate, however, the leave campaigns are now desperately trying to shut it down and muzzle those who take a different view. They are behaving like gangsters, trying to close down the debate with behaviour that has no place in public life.

In their repeated attacks on the Confederation of British Industry (CBI), trying to force the organisation’s hand and sit out of this debate, Vote Leave’s is making a concerted attempt to stifle the views of some of the country’s largest businesses. Protests outside the CBI conference, disrupting speeches, aggressive letters – these bully boy tactics are a sign they are losing the argument rather than embracing it.

Well excuse me, but I can’t find a violin small enough to play in mournful solidarity with the mighty CBI, let alone the Prime Minister of the United Kingdom – who has the bully pulpit of his high office and the entire machinery of government with which to campaign against Brexit. It is frankly ludicrous to suggest that eurosceptics possess the official, financial or physical muscle to drown out the europhile message in the way that BSE pretend.

But what we lack in a bully pulpit, we eurosceptics more than compensate for by the simple virtue of being right. Right on the facts, and on the right side of history, too.

The pro-EU campaigns will inevitably get away with a lot of lies and distortions during this referendum campaign, simply because it will not be possible for us Brexiteers to refute each and every single one of them. But one thing that BSE and other europhile campaigns absolutely must not be allowed to get away with is successfully portraying themselves as the plucky underdog, fighting an uphill struggle against the mighty forces of euroscepticism.

I don’t think that there is currently a great chance of that happening, but we should take care to slap down any attempts to portray the pro-EU juggernaut as some kind of rough-and-ready insurgency. Nothing could be further from the truth.

But I do hope that someone remembers Chuka Umunna’s impassioned defence of the CBI – and how he came out swinging in support of downtrodden multinational corporations in their battle to be heard over the little guy – the next time he runs for the Labour leadership.