Acting Labour Leader Harriet Harman gave a very revealing interview to the Guardian this weekend, looking back on her career as she prepares to return to the backbenches after serving in the party leadership since 2007.

Whilst one can – and should – strenuously disagree with Harman’s politics, no one can deny her role in the feminist movement or the trail she blazed by standing up to the horrifically sexist club that Parliament was when she was first elected in 1982. Given these accomplishments, it is a shame that she now ends her frontbench career presiding over a farcical leadership contest and the potential splitting of her party.

But the most memorable part was when Harman spoke about how terrified she was of then Prime Minister Margaret Thatcher that she actually hid round a corner in the Houses of Parliament in order to prevent the approaching prime minister meeting her newborn baby:

Couldn’t the then prime minister Margaret Thatcher have taken her [to the Strangers’ Bar in Parliament]? Harman recoils. She wouldn’t have dreamed of socialising with her, she says.

“Very early on, I brought in one of the babies to the Commons and I saw her at the other end of the corridor. She was bearing down on me with two adoring parliamentary private secretaries trotting at her side, and she looked as if she was going to come and admire the baby. I had this terrible feeling of thinking, ‘I don’t want her to look at the baby’, almost like one of those cartoons where the witch looks at the baby and the baby shrivels. I didn’t want my perfect baby to have Thatcher’s eyes upon him.” Did she hide her baby from Thatcher? “No, I just shot off down a side corridor. It was very visceral, very heartfelt.”

I’m not sure quite what Harriet Harman intended this little vignette to reveal about herself, but it speaks volumes about the way many in the Labour Party see themselves and view their conservative opponents.

The future Labour deputy leader imagining Thatcher as a “wicked witch” figure so evil that her mere glance could cause harm to a newborn baby reveals the seed of something which has long germinated in the left-wing movement, nourished by misunderstanding and the Left’s misplaced but implacable sense of moral superiority.

The impulse that leads some people to scrawl “Tory Scum” on a war memorial is not new. Though it has reached a fevered crescendo in the age of social media and virtue signalling, the dogged belief that conservatives are inherently bad or evil people has been around since long before today’s generation of anti-austerity protesters were born. Indeed, the most senior woman in the Labour Party has held this toxic view for over thirty years.

Try reversing the scenario. Imagine that a newly elected female Conservative MP was walking through the halls of Westminster with her child when she came upon Harold Wilson, Jim Callaghan or Tony Blair. The Tory MP would likely have been opposed to nearly everything that these men stood for – particularly Wilson and Callaghan – but would never have considered running away as an appropriate course of action. Even the genuinely frightening Gordon Brown would not have provoked such a response. Cowering in the face of principled non-violent political opposition, as Harman proudly confesses, is about the least feminist thing she could possibly have done.

Harman goes on to accuse Margaret Thatcher of being unsupportive of other women:

So isn’t it embarrassing that there has still not been a female Labour leader 40 years after Thatcher first led the Tories? Yes, she says, but she regards Thatcher as an aberration. “There was a woman leader who was not supportive of other women, and, when she went, it was basically a men-only cabinet. She was beating the men at their own game. In Labour, we’ve got 50-50 in the shadow cabinet, and nearly 50% in the PLP.”

But all this really reveals is the gulf between the conservative and the Labour mindset. Margaret Thatcher believed in rigourous self-improvement, beating the competition and building a level playing field based on meritocracy. Harriet Harman believes in using quotas and coercive techniques to achieve a superficial equality based on targets and the gnawing desire to look outwardly virtuous and progressive.

This warped mindset makes it possible for Harriet Harman to be A-OK with the fact that the Labour Party still has not produced a female leader, and to negate the Tories accomplishment in doing so half a lifetime ago. The Conservative Party’s woman leader achieved her success through hard graft and an iron-willed desire to succeed (bad) rather than being helped into Parliament via an all-woman shortlist, and moved onto the front benches in order to present a better visual and check the Equality box (good).

So far, so Labour. But what’s really bad is that these sentiments about Margaret Thatcher were not uttered by some starry-eyed student activist or hardcore leftist zealot with a flair for hyperbole. They were uttered by a grown woman, an elected MP, and future Deputy Prime Minister in all but name. And they were uttered as she gave a valedictory interview looking back on her political career, in which she (presumably) thought she was showing herself in the best light possible.

Harriet Harman, the acting leader of the Labour Party, actually thinks that her place in feminist history will be enhanced by re-telling a story about how she thought that Britain’s first female prime minister was so dangerously evil that she recoiled even from letting Margaret Thatcher’s gaze alight on her newborn baby.

That tells you pretty much everything you need to know about the modern Labour Party. 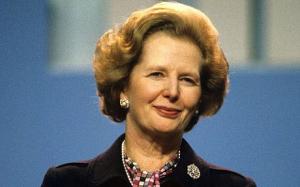