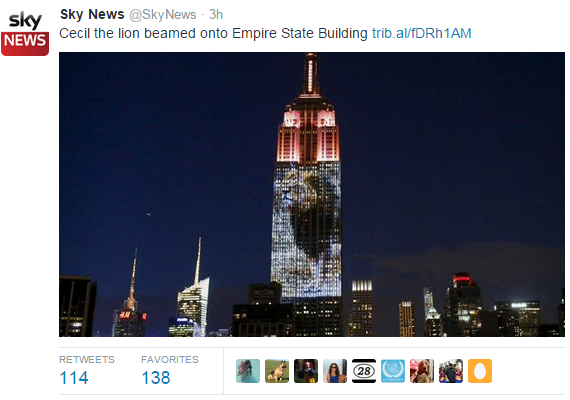 The killing of Cecil the lion has been a virtue-signaller’s dream, a golden opportunity for people to flaunt their enlightened and compassionate credentials without doing any of the hard work required to stop it from happening again

Riding home on the night bus this weekend, Jeremy Corbyn-style, I found myself sitting behind a young couple sharing a convivial meal of Kentucky Fried Chicken. Between chicken wings and mouthfuls of fries, one of them opined to the other about how terrible it was that a human being could do anything so beastly as murder Cecil the Lion, an innocent animal.

“It’s awful, the man who did it should be shot” wailed the companion, as a piece of popcorn chicken slipped from his greasy fingers, rolled past me down the aisle and pinballed down the stairs to the lower deck. Casually imagining the execution of a man for the inhumane treatment of an animal, while devouring the factory farm-raised contents of a KFC bargain bucket. Sure, okay.

Now, I have no time for people who jet off to Africa to shoot unsuspecting endangered animals in order to mount their heads on a wall. It’s not real hunting, for a start, in reality being much closer to shooting fish in a barrel. Quite what such people are compensating for, I won’t begin to speculate. And of course it is sad when any great and noble creature like a lion is unnaturally killed, especially a creature known and loved by so many tourists and safari enthusiasts from around the world.

But some of us are starting to lose perspective over Cecil the lion, and could perhaps do with a quick reality-check. Take the people who decided to beam Cecil the lion’s face onto the side of the Empire State Building in New York:

Cecil the lion has been projected onto the Empire State building to raise awareness about the plight of endangered animals.

The lion, whose death at the hands of a US dentist last month sparked international outcry, was among a number of animals beamed onto the New York landmark as part of the event.

It was organised to promote a Discovery Channel documentary on mass extinction.

You know whose faces were not projected onto the wall of an urban skyscraper, in New York or anywhere else? Trayvon Martin. Eric Garner. Michael Brown. Thaddeus McCarroll. Or any of the mounting number of people shot and killed by American police officers for the high crime of being black, or mentally ill, or – God forbid – both.

(The Empire State Building did see fit to turn itself red, white and blue in honour and memory of Rafael Ramos and Wenjian Liu, two NYPD officers shot and killed in the line of duty – a touching and entirely proper act).

It should be noted that Cecil the lion’s appearance high above Fifth Avenue and 34th Street was part of a wider promotion by the Oceanic Preservation Society, and not in itself evidence of an entire city taking leave of its senses over the death of a big cat in Zimbabwe.

But it is also almost certainly true that one year from now, despite the global furore that Walter Palmer’s slaying of Cecil the lion is causing – including the redecoration of a world landmark 8,000 miles away – very little will have changed. A year from now, it is depressingly likely that other Cecils will still be trophy hunted by poachers and wealthy tourists, both legally and illegally. 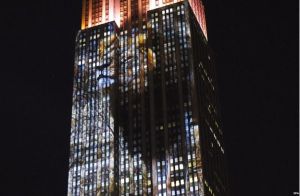 This isn’t intended to be one of those finger-wagging, preening, contrarian pieces written to make the author seem smart and morally superior. I was very upset by Cecil the lion’s death, and I’m also an unapologetic carnivore. Yes, there is probably a degree of hypocrisy in that.

Nor is it intended to suggest that we shouldn’t care about conserving the natural world until the human race has finished perfecting itself, in the way that some argue we shouldn’t have gone to the moon while so many people still suffered on earth.

The point is that when it comes to Cecil the lion or whatever the favoured cause du jour happens to be, it’s very easy to signal your own virtue by  clapping along to stunts like this, by adopting the “right” opinions, liking the “right” status updates or sharing the “right” articles. With social media, it’s easier than ever to do so. But this also makes it easier to absolve ourselves of any responsibility for taking the next step, for actually taking a concrete real-world action to help change the thing we are protesting, or to advance the cause that we profess to support.

But more than this, with so much ostentatious virtue signalling swirling all around us, we are increasingly coming to judge people more for the things they say and the opinions they profess than the way they actually live and the extent to which they live up to the standards they set for others.

How many times have today’s PC campaigners accused a hapless politician for being ‘misogynistic‘ because of an awkwardly phrased remark or a policy which coincidentally happens to impact differently on men and women, while happily sharing a platform with someone on their third or fourth wife? In some circles, how you actually treat the women in your life now matters less than whether you sufficiently wrap yourself in the language and colours of feminism. And so it goes, from issue to issue.

I happen to have certain strongly-held political beliefs. I believe in smaller, smarter government and tackling the overbearing, paternalistic state that seeks to manage every aspect of our lives. I believe in maximum individual liberty, and that society does exist but that it is not the same thing as the state.

I believe that a strong nation state is the best defender and guarantor of our freedoms, and that we should stop undermining the nation state until we decide what kind of world we want our children to live in, and how we intend to maintain democracy in an age of supranational institutions. And I believe that our politics and current constitutional settlement are broken, and that we need to revive ideological debate in Britain under a new, federal constitution.

When I see other people advocating these ideas, I’ll “like” them on social media, and share them where I think they are worth repeating. But I also do something more. I run this blog, which I have maintained for over three years now, in order to develop my ideas, and hopefully reach and persuade some other people along the way. That’s my “next step”, my action beyond simply nodding along when I agree with what other people are saying. But maybe this is not enough. Maybe I should become more involved in activism and overt campaigning. Increasingly, I believe that I should.

Raising awareness is a start, but it is of no help to anyone if we are all so busy raising each others’ awareness of our pet causes and issues that we fail to actually take real-world steps to address them. We can beam distressing pictures onto the wall of the Empire State Building every hour of every day, but if we spend too much of our limited time and resources engaging in these stunts to the detriment of our own activism, then we can become a liability to the very causes we care about.

Mad as hell about Cecil the lion? Then get out your wallet and make a charitable donation. Examine your own relationship to animals in the food chain, and consider changing your behaviour if what you see makes you feel uneasy. Write a letter to your MP. Start a blog. And yes, “like” a few supportive things on Facebook too.

But if you really care about something, make sure you take the next step. That’s the only way change happens. That’s what Cecil would have wanted. 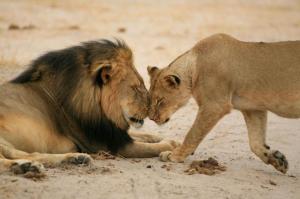