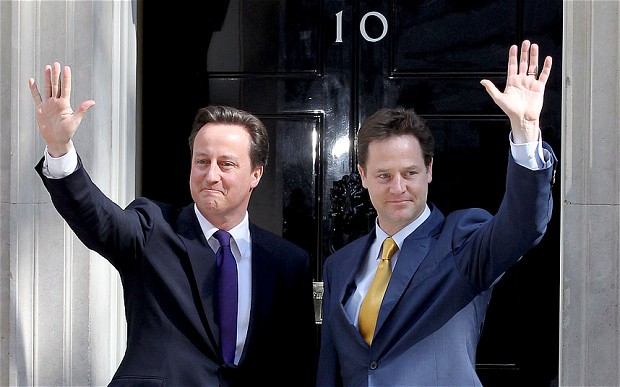 As the 2015 general election campaign grinds past the halfway point with none of the main party leaders doing or saying anything remotely interesting or inspiring – choosing only to shriek about the chaos and carnage that their opponents would do in government – people are starting to ask: where is the passion?

The Spectator’s Fraser Nelson and James Forsyth pick up on this supposed lack of “passion” in politics in their recent interview with David Cameron, conducted as the Prime Minister hurtles around Britain failing to electrify voters with talk of his Long Term Economic Plan and doomsday scenarios about a Labour-SNP government.

Interestingly, Cameron appears totally bemused that his coalition government’s technocratic, risk-averse management of the country from 2010-2015 has failed to win him legions of adoring fans:

The Prime Minister is aware of the criticism and finds it ‘frustrating’. ‘I feel I have worked my socks off for the last ten years to get to this point,’ he says. ‘I feel we are on the brink of something amazing in our country. If I don’t succeed on 7 May I will be furious more for my country — but furious for myself.’ He says this quietly, not crossly, as if he has been confronting his own political mortality. ‘We have done so much to get so far — I do not want to pull back now.’ And then, a promise to do better: ‘If I need to do more to communicate that I will.’

What he is trying to communicate in the final fortnight of the campaign is that Britain’s recovery has been extraordinary, but that it didn’t happen by accident. And that if people want the recovery to continue, they’ll have to vote Conservative. He is writing the speech he’ll give that day, with ‘jobs’ scribbled as the first bullet point. He has created them at a faster rate than any prime minister in history, which he puts down to tax cuts and welfare reform. So he is travelling to Yorkshire to sell ‘an extremely positive plan to transform the education of young people in our country, to keep going with this welfare revolution’.

He accepts that the revolutionary character of his government is not widely appreciated. ‘I think it is very undersold in many ways,’ he says. He doesn’t say by whom. He later refers to the government’s ‘quiet revolution: pro-work, pro-saving, pro-enterprise’.

Revolutionary character? The coalition government came into power promising an economic recovery and the elimination of Britain’s vast budget deficit. It achieved the former but failed spectacularly to eliminate the deficit, reducing it only by a third (now changed to a “half”, thanks to the disingenuous use of different metrics). The Labour Party would have likely done far worse, but this is beside the point – a stable economy should be a hygiene factor, the absolute base in terms of expectations of a “revolutionary” government.

For a conservative-led government to preside over a country where the state is still far too big, where people are still naturally suspicious of personal success and achievement, and where too many people expect government to solve their every problem is hardly revolutionary.

“Working [your] socks off”, as Cameron no doubt rightly claims he has done, is not the same as working quietly and effectively in the right direction. In some areas, Conservative policy has pushed Britain – albeit kicking and screaming – in the right direction. There is no longer a top rate of 50% income tax, a huge banner flying over Britain telling risk-takers, entrepreneurs and the most skilled professionals that their success is unearned and should be a source of shame, for example.

School exam standards are higher, reversing years of grade inflation which rendered school leavers’ qualifications worthless. And low corporate taxation and a regulatory environment that is as pro-growth as possible (within the stultifying embrace of the European Union) has seen Britain create more jobs than the rest of Europe put together.

These are all real accomplishments. But they are hardly radical. And politicians who govern first and foremost as risk-avoiding technocrats and custodians of Britain’s unreformed cradle-to-grave welfare state cannot expect people to whip themselves into ecstasies of passion when considering their relative merits. As this blog noted on Monday:

If the United Kingdom is to survive even another decade, politicians need to lead and talk about the big picture – not just scaremonger about deficits and public services, turning the supreme expression of our democracy into the equivalent of leaving a customer comment card at the GP’s reception desk.

When we treat our country like a business, only caring whether we get the level of service we want at a price that we like, we lose any notion of what it really means to be a citizen.

This is not all the Prime Minister’s fault. When it comes to evincing passion about the Conservative Party’s desire to help the poor and the vulnerable, David Cameron – with his lack of real world experience, his patrician air and whiff of privilege – is particularly ill-equipped to be the messenger.

Not so former Prime Minister John Major, who used his recent campaign intervention to highlight the fact that he is a conservative because of his own humble start in life, not in spite of it. From the Telegraph:

In a deeply personal speech, Sir John said he grew up with Labour but found that the party “divides to rule” by turning the “rich against poor, North against South, workers against boss”. “We need to bring people together, not create chasms to prise us apart,” he said.

The former Prime Minister also warned that the SNP represents a “real and present danger” and under a Labour government will “demand the impossible” and create “merry hell” when its demands aren’t met. He warned that the parties ultimate purpose is to create “drive a wedge between Scotland and England” and break up the Union.

Sir John, who grew up on a council estate in Brixton, said in the West Midlands: “We will never all be born equal. Life isn’t like that. But it is the Conservative mission to make opportunities in life equal.

That is what first drew me to the Party nearly six decades ago. While Labour was offering me a hand “out”, the Conservatives offered me a hand “up”.”

John Major’s speech was hardly “we choose to go to the moon” stuff, but at least it did what a conservative stump speech should do, and made reference to the importance of personal responsibility and striving for equality of opportunity, not enforced equality of outcome. That it took the the last Conservative Prime Minister to win a House of Commons majority to make this case rather than the incumbent – whose manifesto promises a rather sinister “plan for every stage of your life” – inspires little confidence in the current trajectory of the Conservative Party.

So why do the party leaders spend so much time talking about their “passion” for politics when their natural risk aversion is the very antithesis of passion? They do so because they sense the deep public yearning for real political conviction and British national ambition to make a comeback, but lack either the vision (Cameron) or vocabulary (Miliband and Cameron) to adopt a bolder, more radical course. And unless something drastic changes over the course of the next two weeks, David Cameron and Ed Miliband will continue to shout loudly about how passionate they are, while the British people look on with sullen resentment, jealously guarding their taxpayer-funded perks and benefits.

To date, this tedious election campaign has been all about eliminating as much risk and uncertainty as possible from the lives of the British people, promising stability and predictability at the cost of lowering our belief in the possible. A strong economy, not for our individual prosperity but for the sole purpose of funding the precious public services. £8bn more public money to keep a healthcare system from 1948 limping along. More perks for wealthy pensioners, paid for by the young.

This is what happens when you crank up the size of the state and simultaneously ratchet down the promotion of individual achievement or national ambition. This is what passes for politics in modern, security-seeking, risk-averse Britain. Talk about passion all you want, but there can be no passion without ambition, and no ambition without the acceptance of risk – political risk and personal risk.

The parties are deadlocked precisely because because no one is currently willing to take that risk. But as the saying goes: Who dares, wins.

4 thoughts on “General Election 2015: There Will Be No Passion Until We Rediscover Our National Ambition”