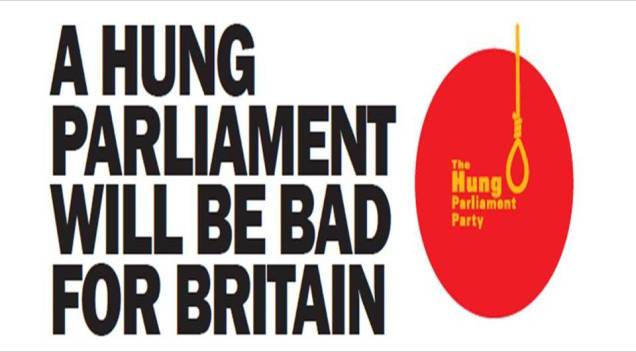 As the official 2015 general election campaign gets underway, all of the polls and indicators point not just to a hung parliament, but to a precariously balanced and dangerously weak government ultimately stumbling from the wreckage.

If there is no majority government, then the opposition parties could vote against the government in a no-confidence motion. However the new Fixed-Term Parliaments Act would then trigger a fresh general election if no government can be formed within two weeks. It’s hard to predict how the fresh result would be different. The Conservatives might benefit if people felt that Labour and the SNP had been obstructive, but it would be an uncertain and speculative venture for all parties.

This meltdown scenario is unlikely, but it has a real chance of happening. Perhaps it would be the natural end for a campaign without a clear winner.

This could truly be the nightmare scenario for Britain: the election results may leave both Labour and the Tories feeling bruised, the LibDems nearly wiped out and not in a position to give either party a majority in coalition, UKIP and the Greens furious that their substantial national support failed to translate into many Westminster seats, and the SNP strutting around in triumph as Scotland effectively becomes a one-party nation.

If David Cameron attempts to soldier on as Prime Minister in these circumstances  he will be assailed for clinging to his post despite having presided over a retrenchment in Tory fortunes, much as Gordon Brown would have been had he succeeded in his efforts to cling on back in 2010. If Ed Miliband tries to weasle his way into 10 Downing Street on the back of SNP and maybe LibDem support, the other half of the country will be livid that so unpopular a leader dares to claim authority to reverse the current coalition government’s policies.

Whether it is a squabbling coalition or vulnerable minority government that eventually limps out of the gates, they will have almost no authority, little mandate and no margin for error. Everyone in Britain will feel aggrieved with those who voted differently for precipitating the chaos, and another, equally indecisive election could soon follow.

But how could we expect a clear winner, when there is no clear difference between the main political parties? When even the Tories wax on about the importance of a strong economy not for its own sake, but as a requirement to feed Britain’s ravenous and sacred “public services”? And when even the Labour Party starts flogging coffee mugs advertising their pledge to “control immigration”? Neither party even attempts to offer a positive vision for Britain, or challenges us to reach our own potential.

Labour, the Conservatives and the Liberal Democrats are all symptomatic of the vast and unhealthy degree of consensus in British politics today – a lumpen mass of follow-the-herd groupthink which operates on the assumption that the greatness of Britain can be measured by its public services, which tells Britain’s wealthy pensioners that they alone are exempt from having to make any sacrifices for the good of the country, and which sees Britain’s membership of the EU as a good (if not essential) thing.

This blog has no left-wing sympathies at all, but can appreciate that it must be hugely frustrating for traditional Labour supporters, those who passionately believe in socialism, to witness their party fight an election campaign on what must seem like a “Tory Lite” manifesto.

Left-wingers should know that it is equally dispiriting for people on the right, those of us who believe in small government and admire the reforms of Margaret Thatcher, to watch David Cameron pitch to the British electorate by suggesting that conservative policies are an unfortunate necessity rather than a positive end in themselves. Even spurred on by the hideous thought of Ed Miliband occupying 10 Downing Street, it is very difficult to get motivated by an electoral product that can be described as Coke Zero Conservatism masquerading as Diet Labour.

The end result is that the excitement, ideological commitment and campaigning zeal has been drained from the two main parties, and taken up refuge in the Green Party, the SNP and most of all, UKIP. But thanks to geographic constraints and the First Past The Post voting system, none of these parties can ever expect to be more than a fringe presence in Westminster.

British politics as it stands essentially encourages anyone with radical ideas or a desire for real change to embrace one of the smaller parties, and then smothers and kills their spirit by ensuring that their efforts amount to nothing in terms of Westminster representation.

It could be otherwise.

Nowhere is it written (not least because we foolishly fail to prioritise the adoption of a written constitution) that the two main political parties have to fight each other for the overcrowded centre ground, at the expense of their very soul and identity. The idea that both Labour and the Conservatives have to stick to some established script when it comes to Europe, immigration or “our NHS” is not cast in stone. There could be more than a cigarette paper width between the two main options of British politics once again, if only there was more courage in Westminster, more leadership from Downing Street and more engagement from the British people.

But this will not happen in 2015. There is too little time left, and the political parties are now firmly committed to their chosen election strategies – the Tories to their ‘long term economic plan’ and Labour to their asinine ‘five pledges’.

So there will be a choice to be made on 8 May. Labour and the Conservatives can continue with their dull centrism, fighting tooth and nail for the “undecided” swing voter – typically disengaged, politically illiterate blobs who were too busy watching reality TV the past five years to stop and think for five minutes about the kind of country they want to live in. Or they can finally take a stand against boredom and sameness, dare to be different and reverse this decline in political engagement which will (at best) only see two thirds of us bother to vote.

Governing isn’t everything. It is in the campaigning that you can make a difference and change minds, too. So at what point would it actually be preferable for Labour or the Tories to go down to principled defeat in order to set the stage for a future revival, and the much needed return of conviction politics?