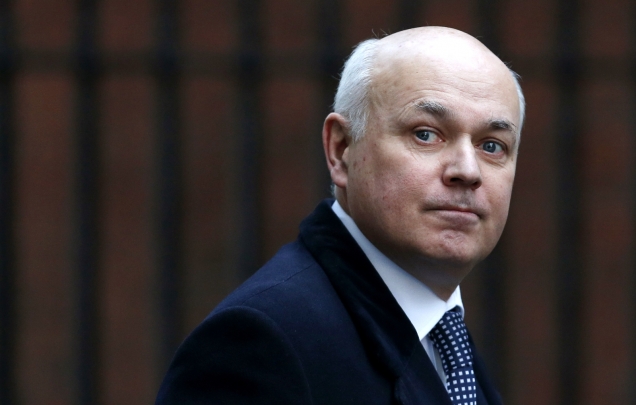 Four years of painstaking research have finally revealed the gaping black hole in Britain’s finances, the reason why the British state has grown so large and expensive yet manages to achieve such mediocre outcomes in so many areas.

No, it wasn’t throwing ever larger sums of money at the same inefficient education and healthcare delivery models. Nothing to do with a rigid retirement age at a time of ever increasing life expectancy. It turns out that the problem was providing multilingual access to benefit claim forms, and translating services to immigrants who lack fluent English. Armed with this knowledge, Iain Duncan Smith, the Work and Pensions secretary, has drafted a clever scheme to fix everything.

The Daily Mail, for whose readers this policy was so transparently and cravenly crafted, summarises it thus:

The move – which would also hit British residents who cannot speak English – was due to be announced tomorrow, but has been delayed following a row with Nick Clegg.

Tories hope that axeing foreign-language versions of documents explaining how to claim benefits would make it harder for immigrants such as newly arrived Romanians and Bulgarians to cash in on the UK’s benefits system, encourage others already here to learn English – and save money spent on translators.

Anyone who thinks that taking this action will slash Britain’s annual welfare bill needs to go away, look at the figures and then maintain a long period of dignified silence. Social security spending (pensions and benefits) will cost Britain £256 billion in 2014. How much of that vast sum do people really think goes toward printing forms in multiple language and hiring translators? Who, exactly, is the Work and Pensions secretary trying to fool?

If you want to do the things that IDS proposes to save some money around the edges then that’s one thing, but to enact them and claim that it will “slash the welfare bill” is misleading and disingenuous. Iain Duncan Smith is a talented minister with otherwise good ideas, and it is discouraging to see him wasting his efforts proposing ideas such as this when he knows full well that they will go nowhere towards solving our fiscal problems.

Of course, there are doubtless some lazy immigrants who are perfectly capable of learning English sufficiently well to be able to function independently, and yet who choose not to do so for one reason or another. Where this refusal is rooted in a stubborn unwillingness to integrate into British society and desire to remain part of an insular and closed community, this is a particular cause for concern, because integrating new immigrants effectively into our country is vital for social, law and order and national security reasons. But threatening to cut benefits from immigrant claimants is highly unlikely to either solve the problem of people persistently failing to learn English or dramatically cut the welfare bill.

If the Tories’ concern about new immigrants struggling to integrate into British society is genuine, then they should propose some positive ideas to help promote inclusion and cohesion, and suggest ways to make it easier for new arrivals to learn their new native language. There should be some carrot (even if the incentive is of the cheapest kind, such as pointing people in the direction of existing English courses at local colleges and institutions) as well as the stick of cutting off access to benefits. If they are not seen to tackle the problem from both ends, many people (myself included) will suspect them of cynical motives.

And cynical they are. This is a proposal designed entirely to grab headlines, but more worryingly than that, it is a proposal designed to win the approval of the Daily Mail. If the Conservative party is really gearing up for 2015 general election mode by pandering to the prejudices of their base rather than reaching out to those whose instincts are to vote Labour or Liberal Democrat (who are likely to roll their eyes at policy announcements such as this) then there is grave cause for concern at their electoral prospects.

All is not yet lost – the Conservative Party has recently shown some signs of attempting to reach out beyond their core supporters. But, as so often, we see these small steps forward immediately neutralised by the two steps back of the let’s-bash-the-immigrants rhetoric. Shedding the label of the “nasty party” is not helped by policy proposals such as this.

The sardonic response from the Liberal Democrats puts it best:

“These are proposals from the Tories which haven’t been agreed in Government,” [the LibDem source] said.

“We’ve already taken significant steps to make sure we all enjoy the right to move and to work, but not a freedom to claim.

“We will look at these proposals, but would prefer the Tories to agree policies in Government rather than chase Ukip’s tail via the Sunday papers.”

The Conservatives would do well to heed this particular pearl of wisdom from their inexperienced junior coalition partners.