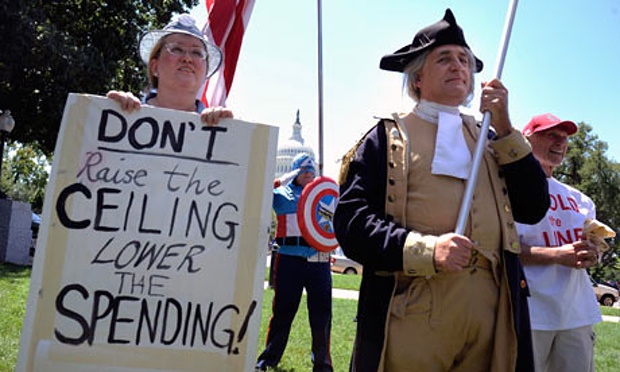 It is hard to disagree with this assessment of recent GOP obstructionism from Jamelle Bouie at The American Prospect:

The crux of the matter:

If I sound frustrated—and I am—it’s because we’re in the middle of an absolutely ludicrous scenario. Under a Republican president, the United States endured eight years of disastrous economic stewardship—arguably the worst of the post-war era—that nearly led to a second Great Depression. In response, voters elected a Democratic president and gave him huge majorities in both chambers of Congress. Rather than work with the new president, Republicans ran to the right and promised to defeat this president by any means necessary. They abused institutional rules to block nominees, and imposed a de-facto super-majority requirement on all legislation. Republicans rejected stimulus, the automobile rescue, a climate bill built from their ideas, a health care bill built from their ideas, and a reform bill designed to keep the Great Recession from happening again.

This was an amazingly successful strategy. It destroyed Democratic standing with the public, energized the right-wing fringe, and led to a historic victory in the House of Representatives. Once in command of the House, Republicans pushed hugely draconian budgets, risked a government shutdown, and nearly caused a second economic collapse by threatening to default on the nation’s debt. This reckless behavior depressed the economy, prolonged the recovery, and destroyed trust in the nation’s political institutions. The Speaker of the House has even promised to do this again, if Democrats don’t bow to his demands for greater spending cuts.

The Republican party of today has drifted so far – not just to the right, but into the realm of crazy, where the eight years of disastrous Bush economic stewardship apparently never happened, and the economic malaise is entirely Obama’s fault – that it’s hard for me to see how I could ever bring myself to vote for them. I have joined firmly with those who are hoping for a complete electoral landslide in the upcoming presidential elections, to perhaps convince the GOP to tack back toward a reasonable, pragmatic conservatism.

Of course, this would have been easier if one of the crazies had managed to wrest the nomination away from Mitt Romney. As it is, we will probably have to wait until Romney’s likely defeat in 2012, and then a further tack to the right and an even bigger defeat in 2016 before we might finally have a viable choice between two parties again.