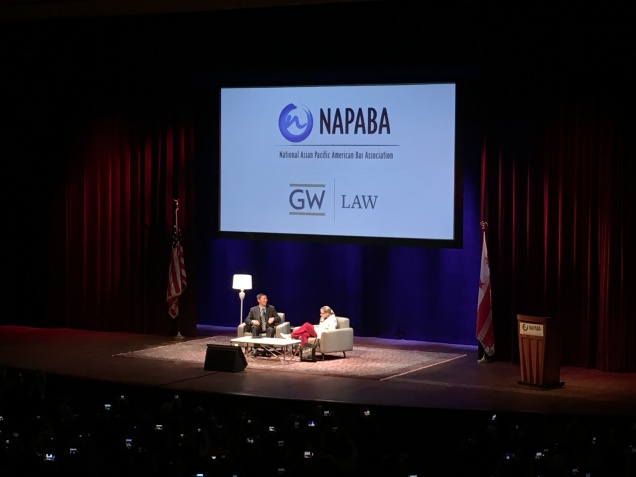 Justice Ruth Bader Ginsburg deserves to be celebrated for her trailblazing career and for her jurisprudence, not simply reduced to a pop culture meme and uncritically worshipped for supporting the progressive political agenda

Today, the famed Justice Ruth Bader Ginsburg, Associate Justice of the Supreme Court – now better known as the Notorious RBG – came to speak at my law school. As well she should, perhaps, since she only lives about six blocks away…

It was good to hear the justice and see her firsthand, though if you have watched any of her other recent appearances or speeches (as I have) you would not have learned anything new today, besides a few interesting factoids about the various films and documentaries being made about her life and career.

I have become rather wary of the “cult of personality” which builds up around some jurists, most notably in recent years Antonin Scalia and Ruth Bader Ginsburg – not because either are at all undeserving of the praise and respect they receive(d), but because treating a justice of the Supreme Court first and foremost as a warrior fighting for one’s own pet political issues contributes significantly to the politicization of the court. Especially now, when many American institutions – from the presidency to Congress to the media – face a corrosive crisis of legitimacy, doing anything which makes the Supreme Court even more of the extended political battlefield that it already is seems reckless.

Already we have a president who has vowed to only nominate candidates with preset positions on hot-button issues like abortion, and leftists who call for adding seats to the court to dilute the “conservative” voting bloc – we don’t need to go any further in those unseemly directions.

"Yes, ladies and gentlemen, we have the Notorious RBG in the house." #RBGatGW pic.twitter.com/9PiDA3koV5

Also from a political perspective, it does not go unnoticed that the first woman to serve on the United States Supreme Court conspicuously fails to enjoy the same acclaim and cult of personality reserved for Justice Ginsburg, the second. Sandra Day O’Connor, nominated by Ronald Reagan and who served on the court from 1981 to 2006, was every bit the trailblazer as Ginsburg. O’Connor, too, had to contend with endemic sexism in her career and achieved a level of success which sets a shining example for aspiring male and female lawyers everywhere. But of course O’Connor, nominated by a Republican president and with a voting record to the court’s ideological right, does not make such compelling Hollywood fodder in a culture which often only celebrates women to the extent they espouse mandatory progressive values. This is a real shame, because O’Connor’s story is very inspiring in its own right. Overlooking O’Connor in order to bestow all of our adulation upon “The Notorious RBG” is akin to ignoring Neil Armstrong and venerating Buzz Aldrin as the only hero of Apollo 11.

As it happens, both Scalia and Ginsburg have written opinions and dissents which I admire (with my still largely-unformed legal brain). I am generally of the opinion that it should be for the state and federal legislatures to explicitly expand enumerated rights by statute or Constitutional amendment rather than continue the charade of having the Supreme Court “discover” new rights which were apparently lurking all along undetected in the words of the founding document. The latter seems like a disingenuous approach, albeit one pursued by both Left and Right on different occasions.

And as Ginsburg pointed out in her remarks this evening, explaining her own equivocation on Roe v. Wade, it can actually be counterproductive for an overly activist court to overstep its bounds and create sweeping new rights at the vanguard of social change. Why? Because this can lead to a political backlash and give opponents a single case law target on which to focus their fire, rather than having to “fight in the trenches” to oppose change in the fifty individual states. How much more secure would Roe supporters now feel in the Age of Trump if the rights they seek to preserve rested upon something more than one solitary Supreme Court decision?

Regardless, there is nothing like looking at Justice Ginsburg’s biography and accomplishments to make one feel inadequate. Here is someone who attended both Harvard and Columbia law schools, served on law review, came up through the ranks of the legal profession when there was real overt hostility to women lawyers, and served a quarter century and counting on the United States Supreme Court. Meanwhile, I plod through my Civil Procedure casebook and try in vain for the third time to understand what the blazes I am supposed to take away from Pennoyer v. Neff.

But I certainly return to my casebooks this evening with an injection of fresh motivation and inspiration. I do not agree with every last one of Justice Ginsburg’s opinions or share her overall judicial philosophy, but I still come away full of admiration, having briefly been in the presence of a real giant of the law. If, at the end of my own legal career I can look back and claim to have made one hundredth of the contribution to law and American life accomplished by Justice Ginsburg then I shall consider my decision to pursue this new calling vindicated one hundred times over.