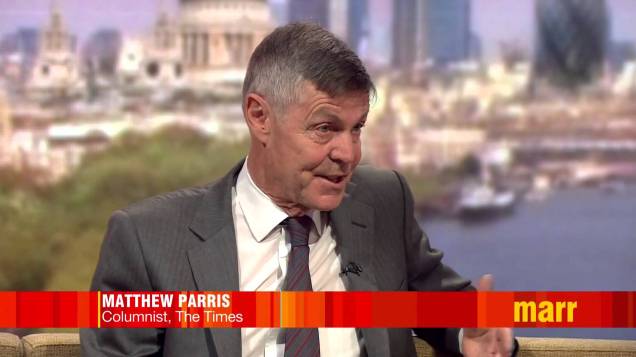 The outcome of a democratic election in the greatest democracy on earth has caused Matthew Parris to lose faith in democracy itself. Go figure.

Self-confessed elitist Parris has a piece in The Spectator today in which he makes it clear just how very disappointed he is in We the People (now apparently downgraded in his estimation from being a “crowd” to a “mob”) following the EU referendum result in Britain and now the election of Donald Trump in America:

The election of Donald Trump as president of the United States may have signalled the death of the closest thing we have to a religion in politics. On both sides of the Atlantic, democracy risks being knocked from the high altar as an unmitigated and unquestioned good.

The man’s obviously a fool and a nasty fool too. The contest should have been a walkover for Hillary Clinton. But it wasn’t. What happened? Can we be sure any longer that democracy works? Is it really the reliable bulwark against political madness that we always supposed?

Without hesitation I plead guilty to the obvious charge: Trump supporters could level it at me, enthusiasts for Brexit do. Spanish enthusiasts for the left-wing populist party of protest, Podemos, and French supporters of Marine Le Pen would tell me the same and they’d be right. The reason I am beginning to question democracy is that it is producing results I profoundly dislike.

Already it should be clear that this is leading nowhere good. More:

But why now? When Richard Nixon was re-elected, did we who had preferred George McGovern despair of democracy? When British Conservative governments fell and socialist governments were elected, did Liberal or Tory democrats develop doubts about democracy itself? Why did we trust the people then, even though they had given the ‘wrong’ answer — but not now? What was it that people like me did believe, when we said we believed in democracy?

Someone urgently needs to introduce Matthew Parris to the concept of the Overton Window.

The reason nobody much cared when “conservative” British governments were voted out and replaced by “socialist” ones in the 50s, 60s and 70s is that they were actually all largely socialist anyway. Party labels at that time were more or less a nostalgic and almost entirely cosmetic sticker slapped on to differentiate two political parties which had both equally swallowed the dogmas of the post-war consensus and the supposed need for a planned, “mixed” economy (in reality an economy in which the government owned and ran vast swathes of industry, from mining, utilities, transport, telecoms and even restaurants and betting shops).

The reason that nobody in Britain “lost faith in democracy” when either shade of socialist Red got itself elected is because it hardly made a difference to their lives. The all-important (and foolish) decision to embrace rather than oppose socialism had been made in smoky back rooms by dusty, frightened old men (and some callow but zealous younger ones). Giving socialism the heave-ho was never on the ballot paper. The only question was whether one preferred Labour or the Conservatives to preside over our national decline.

When the Overton Window of a country’s politics – the range of political viewpoints considered mainstream, acceptable or permissible – is as desperately narrow as it was in Britain until Thatcher came and rescued us from self-inflicted socialist suicide, people like Matthew Parris would have no cause to lose faith in democracy because it continually serves up the kind of muddled, un-ambitious centre-leftism that they like (whether they admit it or not), and because elections therefore essentially do not matter.

The reason that Matthew Parris is now so upset, first with the Brexit vote in the EU referendum and now with Trump’s victory over Hillary Clinton in the US presidential election, is that both of these plebiscites actually mattered – because two markedly different potential outcomes were riding on the result. Or to put it even more bluntly: because the Overton Window has been expanded, and people like Matthew Parris are losing the ability to fix the policy outcome regardless of who wins an election.

The kind of “democracy” that Matthew Parris likes is one in which he and other people like him get together beforehand and decide the future direction of the country in advance, hashing out a deal between themselves before allowing the political parties to tinker around the edges and squabble over branding. Parris doesn’t trust the people to weigh up the important decisions themselves because he can barely tolerate most of the country, as he has himself previously admitted.

So spare a thought for poor Matthew Parris today. Soon Britain will be leaving the European Union, and the range of possible choices – on taxation, social matters, foreign policy, trade and more – over which the British government has greater or total autonomy will increase beyond the ideological guard rails currently imposed by our EU membership.

Worse, with the rise of Jeremy Corbyn, the British public have a real choice between Corbynite post-war consensus socialism and vaguely enthusiastic capitalism for the first time since 1983. And now, with the election of Donald Trump in America, the Overton Window of American politics has expanded so that the old (and often failed) consensus position on a whole range of issues is no longer the only choice available.