No, not really. But his campaign have sent out a survey to supporters, asking them a series of leading questions about what subjects Donald Trump should raise in the first presidential debate on Monday, as well as precisely which insults and zingers he should hurl at Hillary Clinton.

Naturally, the landing page once you complete the survey is a donation form in favour of the Trump Make America Great Again committee (the real reason for the mailshot).

But even though the survey is utterly pointless and will have zero bearing on what Donald Trump decides to do on stage at Hofstra University, some of the questions are quite amusing: 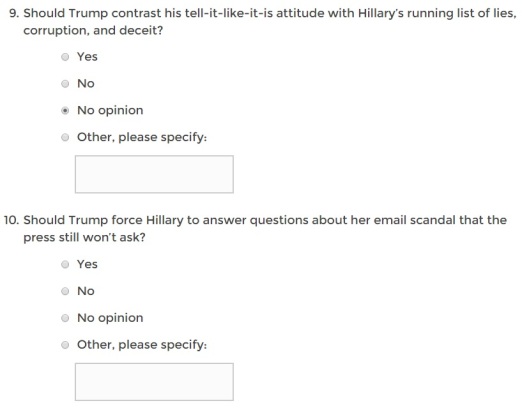 What self-respecting Trump supporter is ever going to select “No” to Question 9?

Meanwhile, other questions just cry out for an honest answer:

But the most amusing part has to be the introductory email: 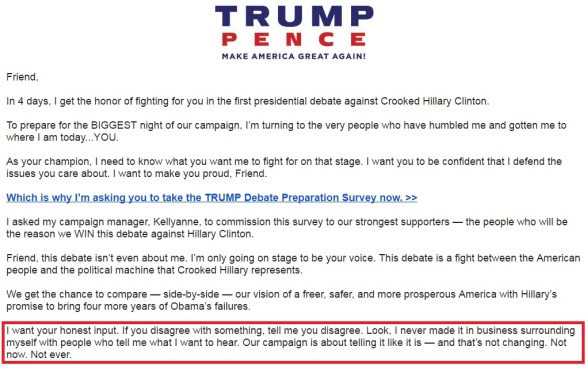 I want your honest input. If you disagree with something, tell me you disagree. Look, I never made it in business surrounding myself with people who tell me what I want to hear. Our campaign is about telling it like it is — and that’s not changing. Not now. Not ever.

Because that’s the Donald Trump we all know and love – the humble and collaborative team player who actively solicits constructive criticism and goes to great pains to respond to just criticism.

Of course there is nothing new about surveys like this – the Hillary Clinton campaign sends out its fair share, too. But it is interesting to see how formulaic and transactional the online campaign still is – fill in this fake survey which nobody will ever read so that we can get our hands on your credit card details too.

And with the emergence of one stop shop political organising software like Nationbuilder, and those incessant, overly personal emails which overuse your name in every sentence (or substitute it with “Friend” if your name can’t be found in their database) in a desperate bid for familiarity, the online campaigns have perhaps never been as divorced from the individual candidacies and personalities of the candidates. There is certainly none of the “authenticity” of the Howard Dean online campaign, or even the Obama ’08 campaign.

The question of authenticity is one that many Dean alums mull. Dean for America was a genuine, organic grass-roots movement that used Internet tools to empower volunteers and supporters to take ownership of the effort, but today’s campaigns use the Web to collect data and control the message.

It rather makes one pine for the pioneering 1996 Bill Clinton / Al Gore campaign website, in all its dial-up, Windows 3.1 glory – if for no other reason than it offers definitive proof that contrary to his own claims, Bill Clinton does use email.

At least once, anyway.