Could mainstream television, radio, print and internet journalism outlets have done more to prevent the rise of Donald Trump? And should they have done more?

Actually, many people are alarmed [by the rise of Trump], but it is difficult to know that by observing media coverage, where little journalistic alarm over Trump is expressed. That’s because the rules of large media outlets — venerating faux objectivity over truth along with every other civic value — prohibit the sounding of any alarms. Under this framework of corporate journalism, to denounce Trump, or even to sound alarms about the dark forces he’s exploiting and unleashing, would not constitute journalism. To the contrary, such behavior is regarded as a violation of journalism. Such denunciations are scorned as opinion, activism, and bias: all the values that large media-owning corporations have posited as the antithesis of journalism in order to defang and neuter it as an adversarial force.

[..] This abdication of the journalistic duty inevitably engendered by corporate “neutrality” rules is not new. We saw it repeatedly during the Bush years, when most large media outlets suppressed journalistic criticism of things like torture and grotesque war crimes carried out by the U.S. as part of the war on terror, and even changed their language by adopting government euphemisms to obscure what was being done. Outlets such as the New York Times, the Washington Post, and NPR refused to use the word “torture” to describe techniques long universally recognized as such — which were always called torture by those same media outlets when used by countries adversarial to the U.S. — because to do so would evince “bias,” lack “neutrality,” and “take sides” in the torture debate.

Contrary to what U.S. media corporations have succeeded in convincing people, these journalistic neutrality rules are not remotely traditional. They are newly invented concepts that coincided with the acquisition of the nation’s most important media outlets by large, controversy-averse corporations for which “media” was just one of many businesses.

While Greenwald is absolutely right to chastise mainstream media outlets for clinging desperately to an “appearance of objectivity at all costs” dogma which routinely sees them humiliate themselves by speaking and writing about the utterly ridiculous as though it were merely an equal and opposing side to an argument, the idea that prestige nightly news anchors could have killed Trump’s candidacy in the crib either by initially declaring it ridiculous and mocking it, or by waging an Edward Murrow or Walter Cronkite crusade against him, seems to be wishful thinking.

It’s wrong because it underestimates the anti-establishment surge now underway in America (and in Britain too, as we saw with the rise of UKIP and the SNP). Suppose that mainstream news outlets like the New York Times, NBC, NPR and others had come out strongly to argue that Donald Trump’s ideas were outside the Overton window of “acceptable” political thought in America, and that he should henceforth be ignored by the media regardless of how many people were attending his rallies or how high he climbed in the opinion polls. What difference would it have made?

Political journalism is scorned by the public as much as Washington politics itself, and often for quite valid reasons – the incestuous, back-scratching relationship between the two is often entirely self serving and actively prevents the holding of government to proper account. Trump’s candidacy is fuelled in significant part by the opposition of those opinion columnists and TV talking heads who have come out to criticise him. If they were joined by everyone else, including news anchors and print journalists whose material does not appear in the opinion section of their television shows or newspapers, it is hard to see it doing anything other than confirming the suspicion of Trump fans that the “establishment” is out to get them, thus driving his poll ratings even higher.

This is important. Trump is riding high partly because of a small group of “let it burn” conservatives who believe that Washington is so corrupt that an authoritarian outsider beholden to no one is as good a choice as any to sweep out the garbage, but mostly because Trump supporters feel ignored and patronised by almost everybody else. And frankly, the opposition to Trump in the media has not helped, tending toward hand-wringing “ooh, isn’t he evil” editorials and one-sided accounts of violence at his campaign rallies rather than granular deconstructions of his policy proposals (such as his policies exist). Increasing the frequency and volume of the existing anti-Trump media coverage will not fix the problem, because it does little to tackle the sentiments and ideas which drive his support.

But more to the point, if we are to set arbitrary limits on our political discourse, beyond which any candidate promoting “unacceptable” ideas is rounded on by the corporate media as it is currently comprised, who gets to set the limits? Who gets to decide which ideas are okay to debate, and which are traps which will bring the entire media establishment crashing down on the person who dares to raise them?

There is almost nothing as infuriating as watching high profile journalists discuss an issue where one side obviously has the moral and intellectual high ground in terms that suggest that it is a finely balanced debate – witness the debates on torture, climate change, Brexit (UK secession from the European Union)  and more. But even worse than this would be a collusion between media outlets to freeze out certain ideas or candidates from being mentioned altogether because they are “evil” or contradict prevailing orthodoxies.

I’m sure that this is not what Greenwald has in mind. As a consistent advocate of free speech, I’m sure that he would prefer a brash and lively media landscape of much more fractured ownership, in which a multitude of independent news outlets are free to carry out the kind of unabashedly partisan campaigning journalism that Greenwald (and to some extent this blog) advocates. Greenwald would likely be fine if some outlets produced coverage very supportive of Trump, so long as other outlets were equally free to oppose him.

But we do not have such a media landscape right now, and moving in this direction would be a process taking years, not months – certainly too long of a timescale to have any impact on the rise of Donald Trump. The difficult truth is that given the hysterical, rabble-rousing behaviour of the Republican Party over the course of the Obama presidency – in which they chose hyperbolic, apocalyptic scaremongering over principled opposition to bigger government – there was nothing that could have prevented the monster they created from coming to life, breaking free of its chains and devouring them, as Trump is now doing.

It may feel good to imagine an American media landscape filled with luminaries like Edward Morrow and Walter Cronkite, journalists who would have taken one look at Donald Trump back when he launched his presidential bid, and masterfully snuffed it out in the course of one withering nightly news broadcast or newspaper column. But that is not the world we live in. Any attempt by major media outlets to scrutinise or inveigh against Trump in these anti-establishment times would only have fuelled his campaign even more than his many critics already have.

“Compelled journalistic neutrality” is not to blame for the rise of Donald Trump. Though corporate media has many faults – witness CBS chairman Les Moonves enthusing about the ratings Donald Trump’s presidential campaign is bringing to his network – they did not create the Trumpian monster, and nor can they stop it.

Far more deserving of blame are the Republican Party establishment, who shamelessly and hypocritically rode the anti-establishment, anti-Obama tiger for seven years before finally it turned on them. And also at fault is an entire remote and self-serving political establishment which in many ways thoroughly deserves the kicking it is now receiving – just not by Donald Trump, the opportunistic and undeserving current beneficiary.

Would it be a cathartic experience to witness more mainstream media types casting objectivity aside and coming out against Trump? Quite possibly. But would it have done anything to stop his rise? Let’s not kid ourselves.

Postscript – The following is an excerpt from Edward R. Murrow’s famous report on Senator Joseph McCarthy:

Earlier, the Senator asked, “Upon what meat does this, our Caesar, feed?” Had he looked three lines earlier in Shakespeare’s Caesar, he would have found this line, which is not altogether inappropriate: “The fault, dear Brutus, is not in our stars, but in ourselves.”

No one familiar with the history of this country can deny that congressional committees are useful. It is necessary to investigate before legislating, but the line between investigating and persecuting is a very fine one and the junior Senator from Wisconsin has stepped over it repeatedly. His primary achievement has been in confusing the public mind, as between the internal and the external threats of Communism. We must not confuse dissent with disloyalty. We must remember always that accusation is not proof and that conviction depends upon evidence and due process of law. We will not walk in fear, one of another. We will not be driven by fear into an age of unreason, if we dig deep in our history and our doctrine, and remember that we are not descended from fearful men — not from men who feared to write, to speak, to associate and to defend causes that were, for the moment, unpopular.

This is no time for men who oppose Senator McCarthy’s methods to keep silent, or for those who approve. We can deny our heritage and our history, but we cannot escape responsibility for the result. There is no way for a citizen of a republic to abdicate his responsibilities. As a nation we have come into our full inheritance at a tender age. We proclaim ourselves, as indeed we are, the defenders of freedom, wherever it continues to exist in the world, but we cannot defend freedom abroad by deserting it at home.

The actions of the junior Senator from Wisconsin have caused alarm and dismay amongst our allies abroad, and given considerable comfort to our enemies. And whose fault is that? Not really his. He didn’t create this situation of fear; he merely exploited it — and rather successfully. Cassius was right. “The fault, dear Brutus, is not in our stars, but in ourselves.” 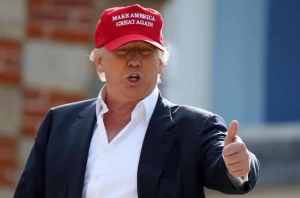 One thought on “Could The Media Have Prevented The Rise Of Donald Trump?”