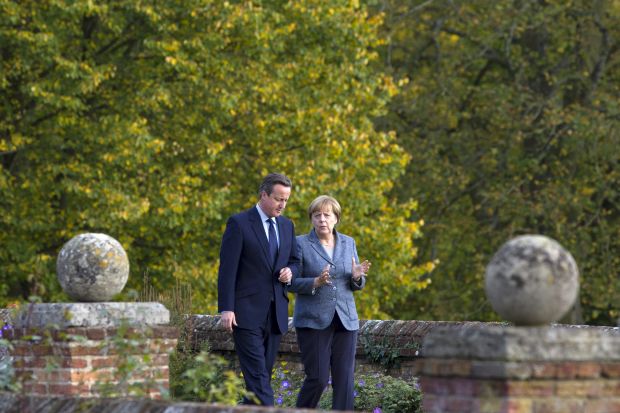 David Cameron’s EU renegotiation is less a firm-handed assertion of Britain’s national interest, and more a collusion with fellow EU leaders to dupe the electorate into believing that real reform is possible

The fact that David Cameron’s key demands and red lines for the EU renegotiation now underway are wilfully vague and almost comically detached from the concerns of British voters is hardly news. But this depressing truth is hammered home even more forcefully today with the leaking of the prime minister’s four-point plan to win concessions from Brussels.

Cabinet sources have told the Telegraph they are confident they can find a way to keep Britain inside the EU with better terms of membership. Their plan involves:

Of these, only one point (the final one) comes anywhere close to defending Britain’s national interest and reflecting the concerns of the electorate. Of the others, the first two points are completely irrelevant, while the third is guaranteed to meet stiff resistance from other EU leaders and will likely require so many other concessions from the government that securing it would be the ultimate Pyrrhic victory.

Take the first point, begging Brussels to make a formal statement excusing Britain from any deeper political integration. First of all, this is completely unnecessary. All that has to happen for Britain to avoid being sucked any deeper into an unwanted political union is for the British government to refuse to sign or ratify any treaty which seeks to create one. We do not need a strongly worded statement from the EU giving Britain “permission” to stay out of a future EU superstate – the Prime Minister simply has to avoid tripping and accidentally signing his name at the bottom of a future treaty signing away further sovereignty.

This is precisely the kind of superfluous and unnecessary law – like the Conservative’s bright idea to pass a law making it illegal for the government to raise taxes prior to the general election – which gives politics a bad name. If politicians kept their word in the first place, they would not need to posture by dramatically making pledges and laws to do the things they have already committed to do.

Besides which, seeking a specific Britain-only opt-out from the EU’s goal of ever-closer union instantly relegates Britain to a second-tier member role, an associate member with the reduced influence and bargaining power that would inevitably accompany such a semi-detached role. This would truly be the worst of both worlds – still part of the EU, still on the hook for EU budget contributions, but even less influence in the 28-member federation than we currently “enjoy”.

Similarly with the second point: for some reason David Cameron is eager to waste important and limited British political capital by fussing over the description of the euro currency in official documents. I doubt there are enough British citizens to fill a London bus who care two figs whether the EU continues to describe the euro as its “official” currency, or worry that doing so might make the pound look inferior by comparison. All that matters here is that the current and future British governments avoid tripping, falling and accidentally signing their names to a pledge to abolish the pound and adopt the euro. So long as this unlikely scenario can be avoided, the EU can declare the euro to be the official food of Europe for all the difference it will make.

So far, David Cameron will have expended enormous energy and political capital seeking agreement from the EU that Britain will never be forced to do two things (agree to further political integration and abolish the pound) which nobody can force us to do anyway. He will have called in favours, leaned on allies and bullied opponents just to receive formal written notification of the status quo. Does this sound like the behaviour of a master political negotiator?

And that’s before we even get to the third point. The proposed “red card” system is purposefully vague, and no explanation is offered as to how national parliaments could wield red cards to halt any unwanted legislation without bringing the entire machinery of the European Union grinding to an immediate halt. How exactly is this supposed to work? Will each member state be given three chances a year to black-ball future legislation that they dislike? Would this veto be possible for all bills? If so, it becomes impossible to see how the EU will ever again agree a budget or come up with a coherent foreign policy position.

Eurosceptics would be delighted at this eventuality as it would effectively neuter the EU, which is why this proposal will never see the light of day. At best, David Cameron will emerge bloodied and weakened from a tough negotiation having secured a cosmetic veto applying only to peripheral issues which nobody cares about anyway.

Only the fourth and final renegotiation point has any real merit, but even this – safeguarding the non eurozone countries from being outvoted on key areas, and protecting the City of London – is unlikely to generate much passion among the electorate. If anything, the strong likelihood of future EU regulations harming and undermining Britain’s important financial sector rightly makes Brexit the safer, low-risk option, precisely the opposite of what Cameron no doubt intends.

But put aside for a moment these obvious critiques of David Cameron’s four-pronged negotiation strategy, and note what is missing from the list – nothing on welfare eligibility for EU migrants in Britain, and absolutely nothing on freedom of movement and immigration.

Whether this is right or wrong, strategically smart or craven capitulation before the renegotiation even begins, it is astonishing that the prime minister of the United Kingdom is apparently preparing to discuss the terms of our EU membership without raising the two most hot-button issues which swelled support for an in/out referendum in the first place.

Unfortunately, it is also completely within character for David Cameron to behave in this high-handed manner. At no point has Mr. Cameron shown the slightest interest in understanding peoples’ concerns about the EU or sought to allay those reasonable fears. This whole renegotiation exercise is a sham, a superficial exercise whereby the prime minister both decides our priorities for the renegotiation for us, and then gives himself carte blanche to determine for himself whether he has met those self-set goals.

If your house was threatened by wildfire and the local fire chief promised to take tough action by drafting a strongly-worded statement condemning the flames for their destructive behaviour, you would rightly be outraged that the remedy proposed comes nowhere close to addressing the burning issue (as it were). What’s needed in that situation are fire engines and lots of water, not vague and unenforceable statements of intent.

And so it is with Britain’s EU renegotiation. At stake are pressing and fundamental issues of national sovereignty and self-determination, yet David Cameron is taking to Brussels a list of concerns and grievances designed to make life easy for his EU partners, allowing them to pretend that they have made great and painful concessions to Britain while in reality giving up almost nothing of their federalist ambitions.

Which in turn raises the worrying question: whose side is David Cameron actually on in these negotiations?