Beguiled by the irresistible prospect of overturning Brexit before it even happens, many Remainers are even more oblivious to the consequences of forcing and winning a second referendum than Brexiteers were to the fallout from victory in the first

What would actually happen in the event that there was a second EU referendum? Unforgiving timescales mean that the prospect of a second vote may be more remote than ever before, despite much salivating on the Left and in the media, but the question is still worth asking because it reveals a pathology within the Remain side which not only mirrors but now exceeds that of the most unlettered Brexit Ultras.

Whether any future second referendum offered voters a choice between accepting the government’s secession deal or remaining in the EU on current terms, or if it posed a choice between the government deal and having to apply for re-entry on likely punitive terms, the argument put forward by establishment Remainers like Chukka Umunna is that “new facts” which “we could not know at the time” would inevitably swing the vote the other way.

Why do they think this? Because the intellectual leaders (though such a term may be too grand) of the Remain movement still refuse – either on principle or through basic incompetence – to empathise with the Brexit case. They live in a world of tenuous economic forecasts and financial charts designed to portray immediate economic ruin but refuse to acknowledge, let alone properly engage with, the democratic or self-deterministic case for leaving the European Union.

Even now, the idea that someone might reasonably vote for a cause which does not personally line their pockets or send perks and opportunities flowing their way is unfathomable to many Remainers (though of course there are Remainers of good conscience who do “get” the democratic argument while disagreeing with it). So on the whole, Remainers are no better equipped to fight any putative Referendum Take Two than they were the first time round.

But it gets worse. At the same time as they failed to update their overall case for Remain (for example by finally producing a forthright and unassailable case for European political union as a valid or exclusive solution to the problems we face), there has also metastasised within the Remain camp a very ugly and shrill Cultural Remain narrative which is openly hostile to Brexiteers as people, not just because of their vote.

This much is evident in that the cultural figureheads of Brexit are people like AC Grayling, Ian Dunt, Gina Miller and other polarising types who make no visible effort to see the argument from the other side (the first rule of persuasion), as to thus engage with “evil” would offend their delicate sensibilities.

Rather than outreach and understanding, there has been a constant hum of outraged, self-entitled contempt emanating from Camp Remain, and a seething hatred of Brexit voters which does not even attempt to mask itself. This is most clearly shown in the way that some Remainers publicly console one another at the prospect of elderly Leave voters dying, while others actively salivate at the prospect:

Wondering how many Brexit voters are no longer with us. And what a bad winter might mean for for the wall of gammon 🤔

(The “wall of gammon” is a derogatory reference to white men of middle age and upwards, for whose deaths it is now perfectly acceptable to openly pine on social media and be blessed by the imprimatur of a Twitter verified tick).

So when the starting gun is fired on any second EU referendum, the pent-up cultural anger from this angry subgroup of Remainers will produce a banshee-type wail of fury and hatred toward the 52% that all but guarantees they alienate more swing voters than they are able to win over.

But we must also consider the dynamics of the public backlash. I wrote immediately following the June 2016 referendum how unprepared I was for the extent of the anti-Brexit backlash – partly because I fully expected the Leave side to lose the referendum and so had not mentally prepared for victory, but also because Brexiteers were so used to being the instigators of populist revolt that we neither saw the Remain backlash coming nor had any experience in defending against such a wave.

What should have been obvious to us then is that given the Remain side consists of the vast majority of politicians, academia and the cultural scene, their capacity to generate and sustain a backlash (or huge public tantrum) was always infinitely greater than a disorganised, squabbling band of Brexiteers who had wanting to leave the EU (in one form or another) in common with one another, but little else.

If Nigel Farage and UKIP were able to create a lot of noise and help dictate the UK political agenda in the years leading up to the referendum – and do so on a shoestring budget while riven with factional infighting, dogged by unforced errors and PR disasters – how much louder and more persuasive would the screams of self-entitled outrage be when they emanated from nearly every artist, celebrity, teacher, professor, public sector worker and a phalanx of journalists and commentators? Most Brexiteers, myself included, completely underestimated that part.

But if the establishment’s ongoing howl of outrage about Brexit is deafening, it would be nothing at all compared to the reaction of Brexiteers to having their decision called into question and the vote re-run in the hopes of getting a different answer. Rightly or wrongly, the resulting social and political conflagration would make AC Grayling’s Twitter feed look like a mellifluous, level-headed stream of soothing wisdom.

I say “rightly or wrongly” because I have no personal hostility toward a second referendum on principle, only that we only seem to be having this discussion because the Remain side lost. Ideally, guided by a written constitution rather than machinations behind closed doors, the terms EU referendum and the consequences of each result would have been more carefully considered, and the potential need for public ratification of any secession deal built into the process. But this did not happen.

On the contrary, the expensive pro-EU government propaganda inflicted on every British household made it absolutely plain that the UK government would implement whatever result was decided in the first and only referendum, despite their strong preference for keeping the status quo. And given the uncharitable way with which they would doubtless be dealing with Leave voters had the result gone the other way, their case is not a tremendously strong one, logically or morally.

Remainers should, however, learn from the harsh experience of Leave voters following our unexpected victory in 2016. Back then, Brexiteers were so keen on winning a “Leave” vote that we didn’t think through the extent of cultural opposition we would face between the referendum and secession day. And now many Remainers are so fixated on overturning Brexit they can’t think past the daydream of a “Remain” vote in a Referendum Take Two.

We hear much wailing about how Brexit has supposedly “divided our country”. This is mostly nonsense – the country was always divided over the EU, it’s just that the side who were used to having their way for 40 years suddenly find themselves unable to call all the shots, often for the first time in their living memory. The balance of divisiveness now tilts the other way.

But the divisiveness of a second EU referendum would make the first seem like good-natured banter between best friends – and having forced a replay, the Remain side would emerge neither victorious nor with their reputation intact. They would be responsible, in the worst case, for a rending of our social and democratic fabric which would likely prove impossible to repair. And even in the very best case scenario, the price of overturning the referendum would be millions of British citizens, half the country, effectively giving up on democracy and returning to a state of resigned indifference, a toxic and self-fulfilling belief that they have neither the right nor the ability to influence national events according to their values.

Remainers, who often consider themselves enlightened and progressive, would ordinarily recoil in horror from any course of action which threatened such toxic side-effects. They just can’t think clearly right now because the (unattainable) prize of scrapping Brexit and rendering the past two years little more than a centrist’s bad dream is so desperately shiny and alluring. 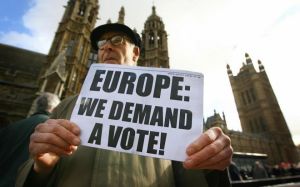 8 thoughts on “The False Allure Of A Second EU Referendum”