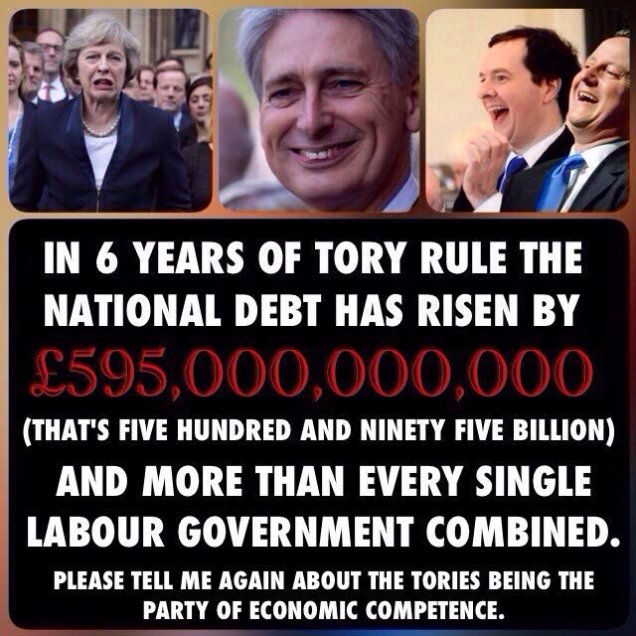 You’ve probably already seen them countless times over the course of this general election campaign – the smug, sanctimonious internet memes bandied about by Labour supporters and other left-wing activists excoriating the Conservatives for having presided over a massive increase in the national debt since taking office in coalition back in 2010.

And of course this is factually correct. The only thing missing from these outraged little infographics is an admission of what would have happened to the budget deficit and national debt under fiscally incontinent left-wing economic policies – and the answer, of course, is that the situation would be even worse.

Yet even “serious” publications have been pushing the same disingenuous message, with Alison McGovern recently writing a piece for the New Statesman, demanding “The Tories used the budget deficit to attack Labour – so why haven’t they fixed it yet?”:

Spot the pattern? Tory Chancellors who loudly proclaim the virtues of having a budget surplus, have, in the end, presided only ever over deficits.

But it gets worse. The deficit, as the gap between money coming into the Treasury and money spent, has to be paid for by borrowing. And quite rightly, the Tories’ deficit target was matched by a debt goal. Borrowing to invest in structural improvements to our economy is clearly the right thing to do. But that is very different from permanent borrowing to prop up day-to-day spending.

This “goal” looks like one that will always be swerved as the Tory mismanagement rolls on.

The budget deficit was used repeatedly by Osborne as an attack on Labour’s record in office.

It’s time we moved on from a debate about the Labour past, and looked at what the Tories are doing today. We should show the leadership the country badly needs, and take this fight on.

Yes, how rude of the homeowner not to instantly repair all of the damage caused by the arsonist.

The bare-faced gall of these people is astonishing. Heading into the Great Recession, the Labour Party under Tony Blair and Gordon Brown consistently ran budget deficits, despite the fact that the economy was growing and boom and bust had apparently been “abolished”. And so when the downturn hit, there was almost zero room for fiscal manoeuvre by the government. Sure, we printed lots of money and nationalised failing banks – didn’t the Left used to angrily call that “privatising the profits and nationalising the losses?” – but we were in no position to undertake the kind of stimulus spending that America unleashed and which Keynesian economics dictates is the correct way to deal with a recession.

The budget deficit naturally exploded and reached a peak just as the Conservative / Liberal Democrat coalition government came into office, reaching a peak of around £160 billion when Labour left office. This means that the national debt was being added to every year at the fastest rate in modern history. To their partial credit, the Conservatives have succeeded in at least reducing the budget deficit every year (thereby slowing the rate of increase in the national debt) though they have consistently relaxed and missed their own targets for doing so, with the budget deficit now not due to be eliminated until the year 2026. And so we now have the spectacle of  smarmy left-wing internet meme-sharers lambasting the Tories for having failed to eliminate the deficit and significantly lower the national debt.

Well, what would they have had the Evil Tories do? The Left squealed like self-entitled pigs when George Osborne made even modest efforts to trim the deficit, repeatedly relaxing the timetable by which he planned to return Britain to a budget surplus. Are the Left now saying that they would rather have had deeper budget cuts? Abolishing the Army, perhaps? Surely not reducing funding for Our Blessed NHS (genuflect)? Or perhaps they secretly intended to eliminate the budget deficit by dramatically hiking income tax and national insurance on all tax bands, in angry defiance of the Laffer Curve? But what when this only suppressed economic activity even further?

Let’s be clear – the Conservative Party, under chancellors George Osborne and Philip Hammond, has been depressingly unambitious when it comes to eliminating the budget deficit. The party of David Cameron and Theresa May has not been the party of fiscal responsibility, and their constant lying about “fixing the roof while the sun is shining” and “paying down Britain’s debts” when in fact they have done no such thing only makes matters worse.

But the only thing more ludicrous than a Conservative Party which struts around pretending to be the guardians of fiscal responsibility is a Labour Party which ran budget deficits in the good years, leaving Britain particularly vulnerable to the loss of tax revenue accompanying a recession, attacking the Tories for having failed to enact measures which they would never have enacted themselves, and which in fact they repeatedly criticised the Tories for even attempting to do. It is simply mind-boggling that the Labour Party dares to attack the Tories on the question of deficit reduction and the national debt when their “anti-austerity” policies would have increased the deficit even further and made the national debt even larger.

I actually can’t take it anymore. It is economically illiterate and it is self-defeating and it has to stop. It is like someone lighting a fire, which is an inferno when the fire brigade arrives, and then the person who starts it runs around replacing the brigade’s water with oil, and fanning the flames, whilst screaming at the fire bridgade that they can’t believe the fire isn’t out. Yes, Labour’s repeated taunts about the national debt really are that preposterous. Self-defeating too, as it brings attention back onto how the fire got started in the first place.

And then launches into this glorious tirade:

So, having left a deficit of £160bn, and a national debt (cumulative deficits added together), of just under a trillion, Labour have noted that the debt is bigger. Well, duh! Were the Tories supposed to have eliminated the deficit in their first year in Government? Impossible. In fact, what the Tories chose to do is to cut spending, added to a few tax rises, and slowly eliminated that deficit. Very slowly, slower than they originally hoped. But at every turn, every cut, Labour opposed them. Every single one. So yes, every year a lot of deficit (decreasing every time) got added to the national debt, but that is because Labour left such a massive deficit.

Now, yes, they left that deficit mostly because of the action they took to save the banking system and to try and stimulate the economy to stave off depression during the financial crisis. A financial crisis that wasn’t caused by Labour.

But look at the seven years between 2001 and the start of the crisis in 2008. Those were times of economic growth. During times of economic growth that deficit should have been a surplus (tax revenue greater than government spending). But it wasn’t, as Tony Blair and Gordon Brown chose to spend and maintained a deficit of around £40 billion a year. This means there was no financial room to manoeuvre when the inevitable recession came. Of course, Brown had boasted that he might have abolished boom and bust, so may not have been ready for that recession. But when it came, a huge amount of public money was thrown at it, which meant the Conservatives inherited a massive deficit.

Here’s my point, every time Labour mention the addition to the debt under the Conservatives, the Conservatives can just point to what they were left with. Best summed up by the note left by the last Labour Chief Secretary to the Treasury, Liam Byrne, to the first Coalition replacement, David Laws: “I’m afraid there is no money.”

It’s funny. Transport these same leftists to the United States, where beloved Barack Obama ruled from 2009 to 2017 in the aftermath of the same global recession, and they would doubtless shriek with outrage at similarly cynical efforts recently made by the Republican Party to pin the blame for American budget deficits and increasing national debt squarely on the Democrats. They would rightly point out that President Obama inherited a mess, an economy in freefall and public spending jacked up artificially high by his fiscally incontinent predecessor George W. Bush. They would correctly point out that nobody can work economic miracles like making a large structural budget deficit and cumulative national debt disappear in an instant.

But the sanctimonious meme-sharers do not live in America where an admired left-wing president ruled for the past eight years. They live in Britain, where the callous, heartless Evil Tor-ees (they’re lower than vermin, don’t you know!) have been in charge since 2010, and so all of the leeway and understanding that they would demand for themselves is stubbornly withheld from the other side under identical conditions.

As is so often the case, Labour Party propaganda relies on voter ignorance and lack of medium or even short-term memory in order to make an impact. With these lowbrow memes and the highbrow articles which underpin them, Labour Party activists and sympathetic commentators are counting on the British people being too stupid to ask what Labour would have done differently to have achieved a budget surplus and reduced national debt given the same circumstances faced by the Tories.

That’s certainly one way to go about trying to win an election, but there is nothing to be proud of in this tawdry, disingenuous approach.