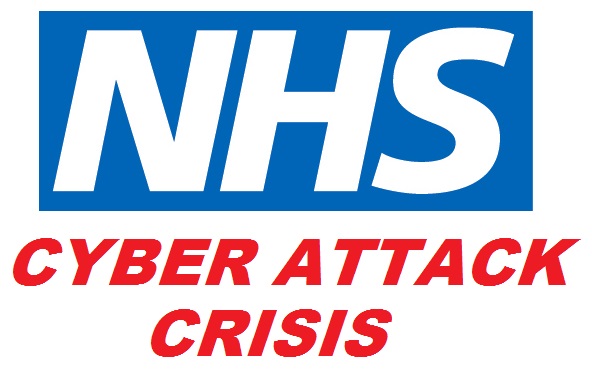 Our NHS is under attack – and not by the Evil Tories, for once!

Newspaper and television news networks are now reporting a major cyber attack targeting NHS England hospitals – apparently all systems are down and an emergency has been declared to initiate backup/recovery processes.

A number of hospitals have been hit by a large scale cyber attack, NHS England has confirmed.

Hospitals across the country appear to have been simultaneously hit by a bug in their IT systems, leading to many diverting emergency patients. NHS England said it was aware of the problem and would release more details soon.

Meanwhile doctors have been posting on Twitter about what has been happening to their systems.

A screen grab of a instant message conversation circulated by one doctor says: “So our hospital is down … We got a message saying your computers are now under their control and pay a certain amount of money. And now everything is gone.”

This is obviously potentially very serious, with possible impacts on patient care – apparently local NHS hospitals are reverting to pen and paper, while tweeting that patients should avoid going to A&E.

Was this a coordinated attack by a foreign power, or is it simply the case of a dozy NHS office admin clicking a dodgy link in an email and falling prey to a traditional money-grubbing scam?

(The answer is almost certainly the latter – this time. NHS Digital itself has confirmed that the generic ransomware attack was not specifically targeted at the health service, as a number of other organisations in multiple regions and sectors are affected; so the outraged NHS priests and priestesses on Twitter calling for the execution or maiming of these hackers can probably stand down now).

But since politicians and armchair pundits have been quick to blame Russia for everything else that hasn’t gone their way lately, I’m sure that Vladimir Putin’s name will be put forward as the man behind this craven attack on Our Blessed NHS.

But Putin should be careful – while Britain and the international community will apparently sit on our hands and dither while he invades Ukraine and drags his country ever further backward toward nationalist authoritarianism, provoking a fight with the NHS might be a step too far.

Even Jeremy Corbyn’s Labour Party election manifesto reserves the right to use nuclear weapons, with great caution, in extremis. Well, since the National Health Service is the closest thing we now have to a religion in secular Britain, attacking Our Blessed NHS may be the one hostile act by a foreign power that could still rouse half the country to press the red “launch” button and fire off some Trident missiles.

But when the dust settles, it may be worth considering that yet another drawback of having a monolithic national healthcare system serving all 65 million people in Britain is that it represents a singular target for mischief-makers and hostile foreign powers alike.

Presumably GCHQ and other agencies are constantly on the case protecting Britain’s national energy grid and other core infrastructure. But as a country have we been so busy singing endless hymns of praise to “Our NHS” that we neglected to realise that it has also potentially become our national security Achilles heel?

At this grave time, let us all repeat the Pledge of Allegiance to Aneurin Bevan’s glorious creation, our country’s pride and joy:

I pledge allegiance to the logo of Our #NHS
The envy of the world
One health system, indivisible
With increasingly poor healthcare outcomes for all

And when NHS England has fixed the problem and we have all made ourselves feel good by cheering on the saintly people who work in the world’s fifth largest bureaucracy, maybe we can have a sensible conversation about breaking up the NHS monopoly – for the good of all patients and, apparently, our national security too.

12 thoughts on “Did The Russians Just Hack Our NHS?”