Donald Trump’s reputation as a brave warrior against political correctness is a big fat lie – he has always been happy to use free speech-busting, SJW tactics to attack and silence his critics

In a move which perfectly illustrates the yawning chasm between the “two Americas”, the cast of hit Broadway musical “Hamilton” saw fit to deliver a rather patronising end-of-show lecture on equality, diversity and tolerance to vice president-elect Mike Pence, who was sitting in the audience.

Telling the audience that there was “nothing to boo” (many of them seemed to disagree, and heartily booed Mike Pence when he first took his seat in the theatre and again when the cast addressed him as he was leaving), cast member Brandon Victor Dixon said:

Vice-president elect Pence, we welcome you and we truly thank you for joining us at Hamilton: An American Musical. We really do.

We, sir, are the diverse America who are alarmed and anxious that your new administration will not protect us, our planet, our children, our parents — or defend us and uphold our inalienable rights, sir.

But we truly hope that this show has inspired you to uphold our American values and work on behalf of all of us. All of us.

We truly thank you for sharing this show — this wonderful American story told by a diverse group of men, women of different colors, creeds, and orientations.

It is actually not a bad speech, and was certainly delivered with an eloquence and dignity which has been largely missing from both sides of this dismal presidential election.

One can take issue with the idea that people need to be constantly nurtured by successive presidential administrations and “protected” by government, but Donald Trump has said enough inflammatory and offensive things on his path to the White House that nobody can say that all of the trepidation is unjustified, or that some people are not in legitimate need of reassurance – either because of things that the president-elect himself has said, or by irresponsible scaremongering by those opposed to Donald Trump.

And yes, one could also rightly point out that it doesn’t say much for America’s social cohesion and inclusivity when the producer of Hamilton: An American Musical could authorise such a speech in the sure knowledge that the words addressed to Mike Pence would speak for every single one of the cast and crew (as they almost certainly did). How many Trump voters or conservatives in general work in musical theatre, or dare to admit their political preferences if they do?

Tonight, VP-Elect Mike Pence attended #HamiltonBway. After the show, @BrandonVDixon delivered the following statement on behalf of the show. pic.twitter.com/Jsg9Q1pMZs

But of more interest than the cast’s speech itself, though, is the response it provoked from president-elect Donald Trump, who now seems to have been given back full control of his Twitter account after anxious aides confiscated his devices in the closing days of the campaign to prevent any final day gaffes or Twitter wars.

Trump clearly did not take kindly to seeing his future vice president lectured on American values by a cast of musical theatre actors, and fired off this angry tweet:

Our wonderful future V.P. Mike Pence was harassed last night at the theater by the cast of Hamilton, cameras blazing.This should not happen!

And then this one, when the rage had still not subsided eight minutes later:

The Theater must always be a safe and special place.The cast of Hamilton was very rude last night to a very good man, Mike Pence. Apologize!

The theatre must always be a safe and special place? Really? I can think of at least one American president in history who had a decidedly unpleasant experience in a theatre, 151 years ago. And during his pivotal and historic presidency, Abraham Lincoln withstood insults and diatribes far worse than anything ever levelled at Donald Trump, and did so with infinitely more grace.

But mark what we are witnessing here: Donald Trump, slayer of political correctness, fighter of censorship, champion of free speech and supposed scourge of the Identity Politics Left, now using exactly the same language of grievance and victimhood to portray himself as a victim in a bid for the moral high ground.

Jonah Goldberg warned months ago that while Donald Trump is quite happy to profit from being seen as an anti-PC warrior, he is also ruthless in using PC tactics himself when he feels under attack:

During the primaries when Jeb Bush had a completely understandable and forgivable gaffe about women’s health issues, for weeks Donald Trump was talking about how horrible Jeb Bush was on women’s issues, playing these politically correct cards. He’s a nearest weapon to hand arguer in all things because he does have no philosophy, he has no intellectual grounding whatsoever.

Nor is he the enemy of political correctness they make him out to be. Trump is perfectly happy to invoke and deploy PC arguments and standards against his opponents, he just wants to be immune from their sting himself.

And now, perhaps, people will start to realise that the man they just elected to the White House is not actually for free speech and against censorship and thin-skinned intolerance in principle, but only when those behaviours stand in his way or threaten to make him look foolish.

In this way and so many others (like the laughable idea that he is a conservative, and that his miraculous Damascene conversion from being a stereotypical wealthy New York liberal is in any way sincere), Donald Trump has conned his way to the White House. And as we have seen, his impulsive nature means that President Trump will inevitably react to events before his aides can restrain him or urge him to rise above minor slights and insults to portray a presidential calmness. Therefore, it will not be long until Trump is exposed as the thin-skinned, criticism averse, dissent silencing authoritarian that he is.

Inauguration Day itself will be one of the first big challenges – there are plans afoot for millions of protesters to descend on Washington D.C. and numerous other cities to voice their opposition to the supposed Trump agenda. Will Trump be seen tweeting responses and insults to the protesters from the presidential platform now being built on the steps of the Capitol, as he watches the inauguration festivities taking place? Will he demand that the National Mall be made a “safe space” free of political dissent as he and Melania take the limousine drive down to the inauguration site?

For those who have so far been willing to overlook them, Donald Trump’s grave character defects were always going to be exposed by events. And now it seems that we didn’t even have to wait until he placed his hand on the Bible and gave the oath before the portrayal of Trump as a happy warrior against censorship was exposed as a sham.

This probably will not bother Donald Trump’s most ardent supporters just now. While the president-elect demands safe spaces for himself, he at least continues to throw rhetorical bombs at all of the “right” people to keep his base happy. But one day that will change.

In a couple of years, when Donald Trump’s political agenda is quite possibly mired in gridlock and the Republican Party faces a difficult set of midterm elections, some of those Trump supporters, unhappy with the slow delivery of Trump’s promised land of milk and honey, may wish to register their anger at the president. And if they do so, the president will attack them too, just as he attacked the hated SJWs and college snowflakes and identity politics zealots during the campaign. But it will not feel so good when the president is demanding a safe space free from the criticism of his own one-time supporters.

Funny. I wonder how many Trump voters realised that they were electing the biggest and most precious snowflake of them all to the most powerful job in the world. 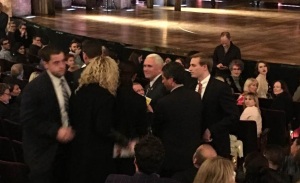