This charming missive from the Camden Momentum NHS Working Group pinged its way into my mailbox this afternoon, and in an idle moment I thought I would point out all of the things that are wrong with it, and which actively undermine the vital cause of healthcare reform and thwart necessary moves to improve healthcare outcomes for ordinary Britons, all for the sake of rigid adherence to failed socialist dogma.

The email reads in part:

Our NHS is in crisis and under attack, we must stand up and fight for it!

The junior doctors strike has alerted us all that our NHS is being stolen from us. It can only be saved by a massive public campaign. Since Jeremy Corbyn was elected leader of the Labour Party by a landslide, we have parliamentary backing to stop and reverse privatisation. Come and hear about:

The Seven Deadly Sins of Momentum and assorted other NHS-worshippers that I have identified are as follows:

1. Catastrophisation. Perpetually suggesting that the NHS is on the brink of destruction. Leftists have been making these breathless allegations during Tory administrations going back to the 1950s, including some long spells of Conservative rule, and yet miraculously the NHS survives – and with it, our unthinking devotion to government-provided healthcare. The hysterical alarmism card is really starting to get quite tiresome at this point. The NHS is far more likely to bury all of us (after quite possibly hastening us toward an early demise) than we are to bury the NHS.

2. Identity Politics. There is always time for identity politics now. If NHS acolytes can find an ethnic, gender or sexuality angle to support their argument they will inevitably do so, because they know just how fatal an allegation of institutional racism or sexism can be.

3. NIMBYism. A monolithic, socialised government healthcare delivery organisation must ration and allocate resources across the country in the most efficient way possible if it is to stand a chance of functioning correctly. Yet at every opportunity, NHS worshippers protest reorganisations that would close small and failing departments in favour of building regional centres of excellence because despite living in the age of the car and the air ambulance, these people come out in hives if they are not within five minute’s walk an NHS building at all times.

4. Militant Trade Unionism. Leaked emails revealed months ago that the junior doctors’ strike was nothing more than a tawdry, grubby pay dispute, with BMA chiefs and key junior doctor agitators deliberately hoodwinking the public by pretending that it was a high-minded dispute about public safety or indeed the very future of the NHS. Of course, every grubby public sector strike in history has been defended on the grounds that participants are engaged in a selfless stand for public safety, and in 2016 we really should be capable of seeing through these left-wing political antics.

5. Supporting the NHS Industrial Complex. The UK’s National Health Service is the fifth biggest employer on the face of the Earth, employing nearly as many people as global fast food giant McDonald’s and many more than the Indian railways, all to service a country of just 65 million people. When nearly the entirety of Britain’s healthcare sector is nationalised, there is inevitably a vast ecosystem of suppliers, support businesses, lobbyists and vested interests with every incentive to maintain the status quo so that they can continue milking the system. But such is the reflexive, unquestioning love that many have for the NHS that we never really stop to consider whether it is run for our benefit, or for the benefit of those vested interests. Just as the military-industrial complex has been a very real phenomenon in the United States of America following World War 2, so the NHS-industrial complex is a real phenomenon in modern Britain. We should be less credulous and recognise this fact.

6. Ideological echo chamber. As the UK general election, Brexit and the election of Donald Trump as US president have shown, by living in an hermetically sealed ideological bubble in which people talk only to others of the same political viewpoint, consume only news sources which validate their existing biases and mistake social media “clicktivism” with real activism and change, leftists end up talking to themselves while ignoring the wider country. The NHS cultists can continue to share social media memes and infographics all they like, but they are only preserving the failing status quo and making it impossible for reformers to be heard.

7. Socialist fundamentalism. Nothing reveals the NHS cultists’ devotion to socialist ideology over and above actual healthcare outcomes more than their blind, hysterical insistence that all privatisation must be eliminated and every NHS service brought back in-house as a matter of ideological purity rather than clinical value. These people will only be happy when the government (through our tax pounds) funds and delivers every single aspect of healthcare, from support functions like laundry, catering, cleaning, construction, marketing, staffing and management through to the front-line clinical work. Never mind the fact that no other advanced country in the world successfully operates a healthcare system as completely nationalised as the one which they favour. Forget learning from best practice around the world, or (heaven forbid) trying something new and bold. No, NHS cultists insist that Britain is to be a socialist beacon to the world, and if you or I have to die because of substandard care in order to glorify their vision of socialised healthcare then so be it.

What do you think? Would you change any of these Seven Deadly Sins, or add any others? 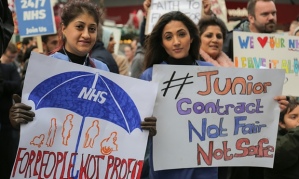 One thought on “The Seven Deadly Sins Of Momentum – NHS Edition”