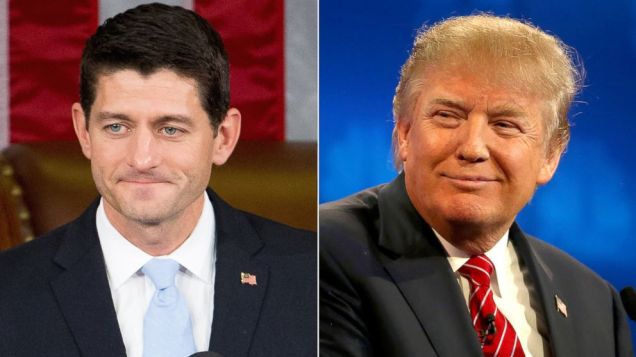 Apparently Paul Ryan, feeling understandably spurned by Donald Trump’s haughty refusal to endorse his primary re-election campaign and pushed to despair by the GOP nominee’s decision to get into an unwinnable mud fight with grieving gold star parents, is now trying to create some distance between himself and his party’s emotionally unstable nominee.

House Speaker Paul Ryan (R-Wis.) on Thursday warned that his endorsement of Donald Trump shouldn’t be seen as a blank check.

“If I hear things that I think are wrong, I’m not going to sit by and say nothing, because I think I have a duty as a Republican leader to defend Republican principles and our party’s brand if I think they’re being distorted,” Ryan told Green Bay’s WTAQ radio.

Asked whether there are situations that could cause him to withdraw his support of Trump for president, Ryan responded, “of course there are.”

“I’m not going to get into the speculation or hypotheticals. None of these things are ever blank checks. That goes with any situation in any kind of race. But right now, he won the thing fair and square,” Ryan said.

One can understand the impulse within Paul Ryan to engage in these dignity-saving manoeuvrings. But he should not be allowed to get away with them. Any Republican who threw their arms around Donald Trump or who spoke in his favour at the at the Republican National Convention has inextricably yoked their political souls to that most profoundly unconservative of candidates. And having made their bed with Trump they must now be lashed to it, even as that bed careens down a hill and over the edge of a cliff.

I like Paul Ryan. His blend of ideological zeal (he used to make his interns read Atlas Shrugged) and governing pragmatism appeals to this blog. He isn’t perfect, but he makes the statist, Coke Zero Conservatives in charge of Britain look like Vladimir Lenin.

But you don’t mess around with a systemic threat like Donald Trump. This blog is not against populists in general – heck, I even voted UKIP in the 2015 general election in despair at the socialist Conservatives and in grudging admiration of Nigel Farage’s political courage (if not his more offensive statements). But Donald Trump is no Nigel Farage. Trump has no history (or interest) in public service. Trump is supremely indifferent about policy matters. And if you thought that UKIP’s stubborn belief that leaving the EU would make everything wonderful was simplistic, it becomes the very picture of nuance compared to Donald Trump’s one-dimensional plan to Make America Great Again.

Unfortunately, Paul Ryan decided to hitch his wagon to the Trump train. True, he did not create Donald Trump, Presidential Candidate Edition – that dubious honour lies with Republicans like Mitch McConnell who helped set the Republicans’ implacable tone of opposition to President Obama, and to the crazier/birther element of the Tea Party who legitimised the hysterical conspiracy theorising in which Donald Trump specialises. But faced with a victorious Trump in the GOP primaries, Paul Ryan bestowed the Republican Party’s official seal of honour on Trump, bestowing on him the imprimatur which allows Trump to claim with a straight face to speak for American conservatives.

The Washington Post’s Jennifer Rubin is having none of Paul Ryan’s evasions either:

1. If he has to constantly step forward protect the GOP “brand,” Trump is therefore a threat to it. Ryan acknowledges Trump has been distorting the party’s principles. Ryan’s ongoing support thus contradicts his stated intent to protect the GOP.

2. If attacking a Gold Star family, inviting Russia to meddle in our election and launching a racist attack on a federal judge are not grounds for pulling support, it is fair to ask if Ryan has any “red line.” It’s not a hypothetical; it’s a statement of his current principles.

3. Winning “fair and square” has nothing to do with Ryan’s continued support. As he said, things can change, and Trump surely has gotten worse since he sewed up the nomination. Moreover, it is Ryan’s obligation to provide voters with his own, independent judgment. That’s what all elected officials should do, but it seems a basic requirement for leaders.

4. Ryan’s continued support for Trump in order to provide cover for his members (“defend Republicans”), which one can surmise is one reason he continues this excruciating contortionist act, is deeply misguided. Trump is losing nationally by a lot. He’s losing in critical states where there are at-risk members of Congress. Rather than tying their fate and the fate of his majority to Trump, Ryan should be telling every member that we are in extraordinary times, when endorsing the presidential candidate is not a requirement of being a Republican in good standing.

It’s very likely Ryan and other Republicans thought they’d tepidly nominate Trump, keep the election close and thereby save some GOP seats. It has turned out differently, as Trump has repeatedly embarrassed the party and attempted to humiliate Ryan and other leaders. You cannot fine-tune the electorate such that you can bank on losing but not by too much. In the case of Trump, once the American people get a look behind the curtain and recognize what they are dealing with, a runaway election becomes entirely possible. Support for Trump then becomes an anchor around the ankles of Republicans — not to mention a source of nonstop intellectual and ethical stress for Ryan. Perhaps in the weeks to come, he will see that.

Paul Ryan’s dilemma is a microcosm of the entire establishment Republican Party’s dilemma. Do they denounce their own presidential candidate and squander whatever slim chance they have of winning the White House (assuming they actually want to put Donald Trump in the Oval Office)? Or do they squander what intellectual and moral credibility they have left and stand by their man?

In these unprecedented times, this blog believes that Republican politicians should have absolutely no compunction about abandoning a presidential candidate who offers at best a grotesque pastiche of conservatism, and disassociating themselves from Donald Trump. If it leads to a grassroots backlash and future GOP primary battles, so be it. The poison coursing through the Republican Party must be drawn one way or another. Best do it now. And assuming a Clinton victory in November, they will have every chance of a Republican landslide in the 2018 midterms and retaking the White House in 2020.

At present, however, most Republicans seem to be operating under the assumption that Trump is a nightmarish aberration, and that things will simply go back to normal once he has left the scene. This is not so. Trumpism will require defeating, not by condescending attacks on his supporters or with barrels of Koch money, but rather by the patient and charismatic advancing of the small government principles which represent the GOP at its best.

Here’s the rub, though: only those Republicans untainted by association with Donald Trump’s experiment in angry, illiterate populism will have the credibility to do the rebuilding. Paul Ryan should have been one of the rebuilders. He may just still qualify, if – and it is a big “if” – he puts his responsibility to the country ahead of his responsibility to guide the GOP’s short term electoral success.

But right now, the Speaker of the House is awkwardly straddling two sides, displeasing both the loyal Trumpists and the principled conservatives-in-exile. If Paul Ryan is to fulfil his potential he needs to stop being arbitrator-in-chief between the Republican Party’s warring factions, pick a side and become a belated profile in courage instead.