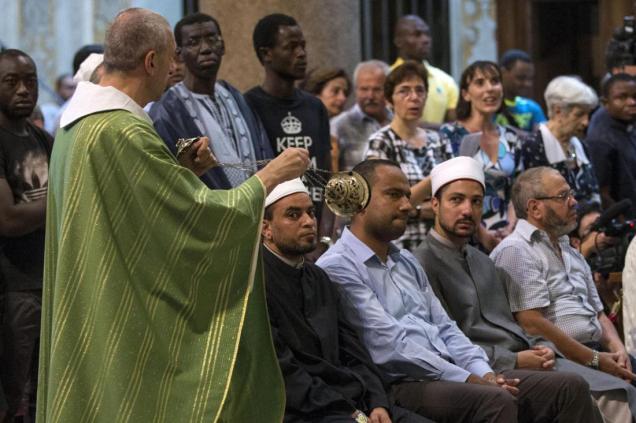 After the appalling terrorist murder of a Catholic priest committed in the name of Islamic State, a moving gesture of interfaith solidarity by French Muslims should be acknowledged and applauded

It is important, I think, when criticising the fundamentalist element of Islam and the degree to which it is often tolerated or tacitly encouraged by parts of the mainstream, to give credit where it is due and acknowledge work done and gestures made against extremism by the Muslim community.

One way that we have been doing that this week is by celebrating again the life of slain US army capt. Humayun Khan and his gold star parents, who appeared on stage at the Democratic National Convention in Philadelphia last week to repudiate the anti-Muslim rhetoric spewed forth by the Donald Trump presidential campaign.

And another way should be to acknowledge the moving gesture of so many French Muslims attending Catholic Mass at their nearest church or cathedral, showing solidarity with a Catholic community still reeling from the murder of a beloved parish priest at the hands of Islamist terrorists.

Muslims in France and Italy flocked to Mass on Sunday, a gesture of interfaith solidarity following a drumbeat of jihadi attacks that threatens to deepen religious divisions across Europe.

From the towering Gothic cathedral in Rouen, only a few miles from where 85-year-old Rev. Jacques Hamel was killed Tuesday by two Muslim fanatics, to Paris’ iconic Notre Dame, where the rector of the Mosque of Paris invoked a papal benediction in Latin, many churchgoers were cheered by the Muslims in their midst.

[..] French television broadcast scenes of interfaith solidarity from all around France, with Muslim women in headscarves and Jewish men in kippot crowding the front rows of Catholic cathedrals in Lille, Calais or the Basilica of St. Denis, the traditional resting place of French royalty.

There were similar scenes in Italy, where the head of Italy’s Union of Islamic communities — Izzedin Elzir — called on his colleagues to “take this historic moment to transform tragedy into a moment of dialogue.” The secretary general of the country’s Islamic Confederation, Abdullah Cozzolino spoke at the Treasure of St. Gennaro chapel; three imams also attended Mass at the St. Maria Church in Rome’s Trastevere neighborhood, donning their traditional dress as they entered the sanctuary and sat down in the front row.

Ahmed El Balazi, the imam of the Vobarno mosque in Italy’s Lombard province of Brescia, said he did not fear repercussions for speaking out.

“These people are tainting our religion and it is terrible to know that many people consider all Muslim terrorists. That is not the case,” El Balazi said. “Religion is one thing. Another is the behavior of Muslims who don’t represent us.”

This blog and others often focus, reasonably, on the failings within the Muslim community – failure of integration and assimilation, failure to stand up for British values (though we are often just as much at fault for failing to transmit those values), failure to confront and root out the extremism in the midst of families and communities. These things are important.

But it is also sometimes the case that we fail to acknowledge those times when the Muslim community does come out strongly in condemnation of fundamentalist, Islamist terror. Anti-extremist counter-protests by Muslim groups often do not receive the media coverage extended to telegenic extremists and their “behead those who insult Islam” placards. Hard and difficult work accomplished in communities goes unrecognised.

And so, as an outspoken opponent of fundamentalist Islam and as a practising Catholic, it is important that I choose to be magnanimous and welcome this touching gesture made by so many Muslims in France and Italy.

Praying before a blasphemous icon of another Jesus, standing in the shadow of a sacrificial cross which they deny, beneath the dome of a cathedral church steeped in idolatry, myths and deception, Muslims throughout France and Italy attended Mass yesterday. From Rouen, Nice and Paris to Milan, Naples and Rome, hundreds flocked to express solidarity and compassion with Europe’s Roman Catholics, many still reeling, weeping and mourning the loss of a much-loved elderly priest, Abbé Jacques Hamel, whose throat was slit by Islamists as he celebrated Mass last week.

All Muslims are exhorted to the greater jihad, to strive against the flesh and persevere in the purposes of Allah, but not all jihad is holy war. All Muslims are not Islamists, but Muslims are becoming terrorists. It is futile, patronising and dangerous to deny it. Islamists are extremists who kill the innocent; Muslims who are moderate and enlightened seek to worship in peace. Islam is not all about oppressing, torturing, murdering and slaughtering. It just seems like it. And no wonder, when the news dishes up a daily diet of Islamic State videos exhorting the faithful to attack the enemies of Allah; Western Muslims who fight for their country are condemned as apostates; hotels are bombed; ancient shrines blown up; ‘spies’ are beheaded; oil fields blaze; and British imams preach to young boys that it’s okay to have sex slaves. That’s just today’s coverage of degradation and destruction.

Amidst all this global trauma, suffering and strife, it is a cause of great hope that so many Muslims can put aside their theological scruples and multifaith ecumenical aversion to attend the Sacrifice of the Mass. It is profoundly offensive to their beliefs, and utterly repugnant to their teachings: Jesus is not the Son of God; he is not divine; he did not die on a cross; he does not become a wafer; praying with wine is haram.

There were tears during the sign of the peace. ‘God was in Christ, reconciling the world unto himself‘ (2Cor 5:19). In their shared humanity, Muslims and Christians bore witness to the humanity of Jesus, his sacrifice and death, his reconciling love, his resurrection and glorification. ‘For where two or three are gathered together in my name, there am I in the midst of them‘ (Mt 18:20). The Living God is present in the world, if not in bread and wine. We can meet Him, pray to Him and listen to Him. That is our privilege through Christ. And in that communion we stand with all believers in the world and throughout all history. And we stand with all participant peace-loving Muslims, too. ‘This is my blood…‘

In a sign of just how bad things have gotten in Europe, this blog was actually surprised when there was no major, high-profile terror attack last Friday, perfectly timed to dominate television coverage leading into the weekend, when previous weekends had seen such attacks.

No matter how routine this destruction and insecurity may become in the short and medium term, we should not allow this “new normal” in Europe to become in any way acceptable or excusable, and we should hold European leaders firmly to account for the whole range of bad decisions they have made – from social policy and a lack of focus on protecting national culture and encouraging assimilation right through to the migration crisis – which have increased the risk of Islamist terror attacks on our soil.

But as we witnessed at Catholic Masses across France this Sunday, it is not all bad news – a fact which those of us who report or comment on human events should be careful to acknowledge.

6 thoughts on “Not All Muslims”